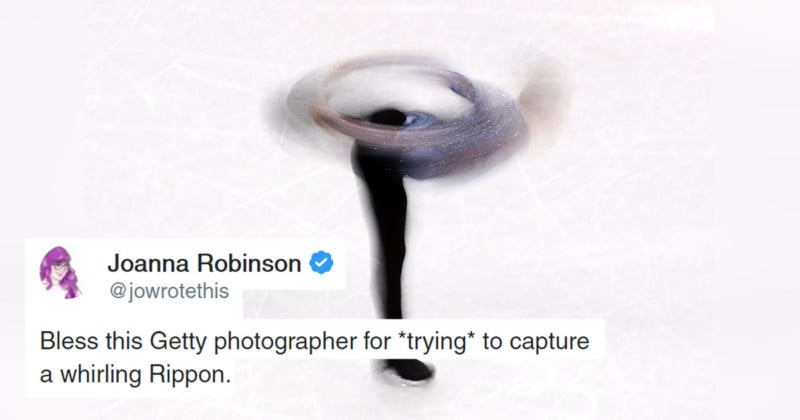 Robinson later clarified her position as a misinterpretation, but putting the nuance of language aside, how successful is this image?

Oh gosh some people are taking this tweet very much the wrong way. I meant nothing but support and admiration for the photo and poor choice of words may have made it seem otherwise. Anyway. Hooray for gorgeous skating and impressive photography. https://t.co/5rDJ7Qa1rZ

“Dragging the shutter” (aka using a slow shutter speed) has a number of applications. In flash photography, it can be used to create light streaks.

Nikon Ambassador Andrew Hancock combined ambient and strobe with a long shutter to create this impressive photo of Alex Caruso taking it to the hoop:

Even without flash to freeze a final moment (assuming one is using rear-curtain sync), the long exposure can be used to convey motion or speed as in Kai Pfaffenbach’s image of Usain Bolt from the 2016 Summer Olympics.

The key to this style of imagery is a combination of a few factors:

Which takes us back to Mouhtaropoulos. He’s no stranger to sports photography, and he’s had a lot of experience with dragging the shutter. These speed skating images follow the “rules” more conventionally:

And here is the move in real-time:

Rippon isn’t actually rotating quickly. I’m estimating that he’s doing about 85 revolutions per minute, so the shutter speed could have been in the 1/60s range to capture this image.

So was Mouhtaropoulos successful in what he was trying to capture? This is what makes the image successful to me:

Is it a gold medal-worthy image? Insofar as sports photography goes, it’s about context. Had this been apart of a gold medal-winning routine that propelled Rippon into first place, then I would say yes. But that doesn’t invalidate the successful execution of an image that Mouhtaropoulos most definitely saw in his head before pressing the shutter.

My Worst Day Ever as a Photographer at the Olympics