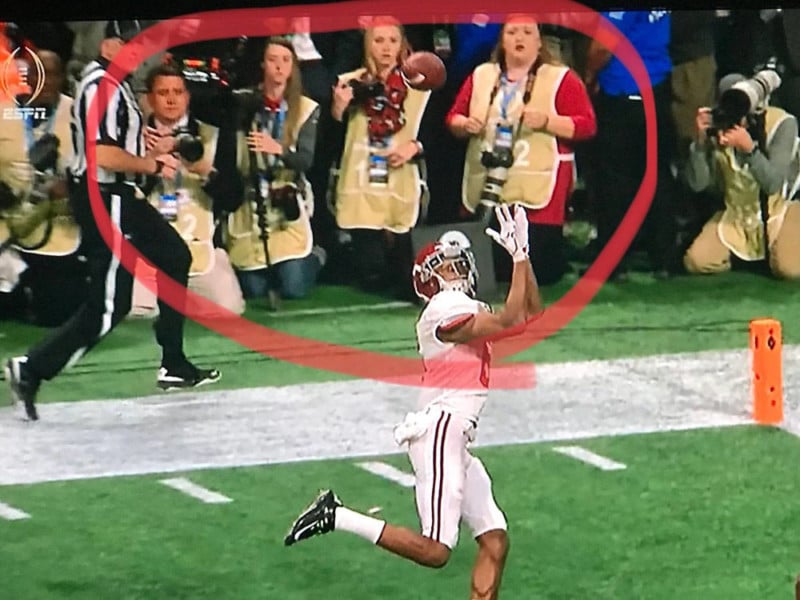 It was a classic NCAA Championship game. Perennial powerhouse Alabama comes back to tie the game in regulation and then win it in overtime. The game-winning play was a 2nd down, 41-yard heave-ho into the end zone that broke a lot of Georgia fan’s hearts. It was a play that will be etched in their collective memories for a long time. And one image, a screen grab of that play, will also be etched in the memories of a few people… for a totally different reason.

The screen grab above has been circulating on the Internet for a while now. It shows credentialed photographers watching the play as it happened, as opposed to shooting it. Not a good thing… if you are a professional photographer. There really is no excuse for that. It meant that they were not prepared.

As a Videographer this screengrab is infuriating in so many ways…our #s are always limited at big events…meanwhile you have four people not paying attention and one shooting with an i-Phone during the biggest play of the biggest game of the year… pic.twitter.com/tKwqLVDY5u

Any sports photographer worth their salt will have a second short-lensed, pre-focused camera around their neck JUST for occasions like this one at a sporting event. One that they can grab quickly and “press and pray” that they get something as it happens right in front of them. It’s part of the sports photographer’s playbook. Sometimes you just also have to be “lucky,” but as my good friend and consummate professional Walter Iooss Jr. used to say, “Luck favors the prepared.”

But what bothers me more than the fact that these photographers missed the play of the game is the amount of “bashing” that they are being subject to on many social media platforms. Now don’t get me wrong, I’ve already stated my case about how they screwed up. I’m NOT giving them a pass. But there are ways to say things without coming across like arrogant a**holes who know everything and things like this never happen to them.

Remember, we all didn’t start out as “seasoned” photographers. We were all “rookies” at one point in our careers. And it really doesn’t move the issue forward when we so harshly criticize with comments like, “They’re amateurs…or they’re just “kids”…and even in some cases turning this into a gender issue. This has NOTHING to do with gender!

And to the rest of you who think there can be any positive effect gained from trashing them on social media, remember two things: One, you were a rookie at one point in your career… and two, as an industry, WE ARE BETTER THAN THAT!

About the author: James K. Colton is currently Editor at Large at ZUMA Press and Editor-in-Chief of zPhotoJournal.com. He recently left his position after 15 years as the photography editor for Sports Illustrated. He began his career in 1972 as the color picture editor for the Associated Press. Five years later he joined Newsweek and became the director of photography in 1992. He is on the Board of Directors of the Eddie Adams Workshop. He was the Jury Chairman for the World Press Photo contest in 2005, received an International Photography Awards “Lucie” for Picture Editor of the Year in 2007, was named Magazine Picture Editor of the Year in 2008 by the National Press Photographers Association, and has been acknowledged as one of the 100 most important people in photography by American Photo. You can visit his website here and connect with him on Twitter. This article was also published here.

How to Do a Photo Shoot from Start to Finish, From Planning to Editing