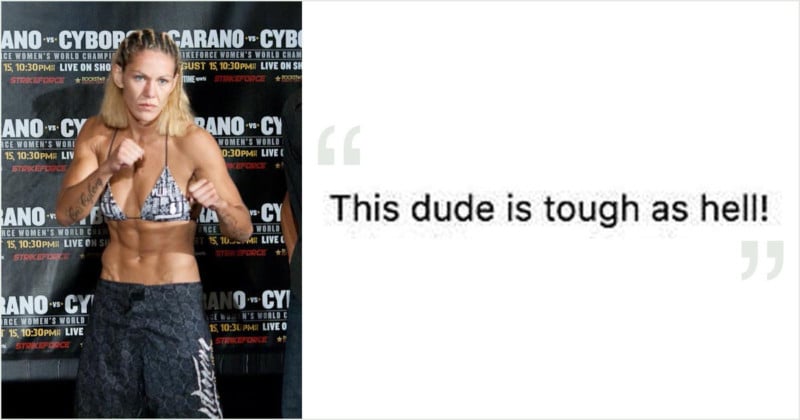 A photographer has been banned by the UFC over offensive comments he made in an Instagram post against a female mixed martial arts fighter.

Mark Aragon, staff photographer for Jackson-Winkeljohn, covered the Women’s Featherweight title fight on December 30, 2017, between Cris Cyborg and Holly Holm (a Jackson-Winkeljohn fighter). After Holm’s loss to Cyborg, Aragon took to Instagram and attempted to insult Cyborg. Posting a photo of Cyborg speaking to the media, Aragon referred to her as a “dude” and “he”. 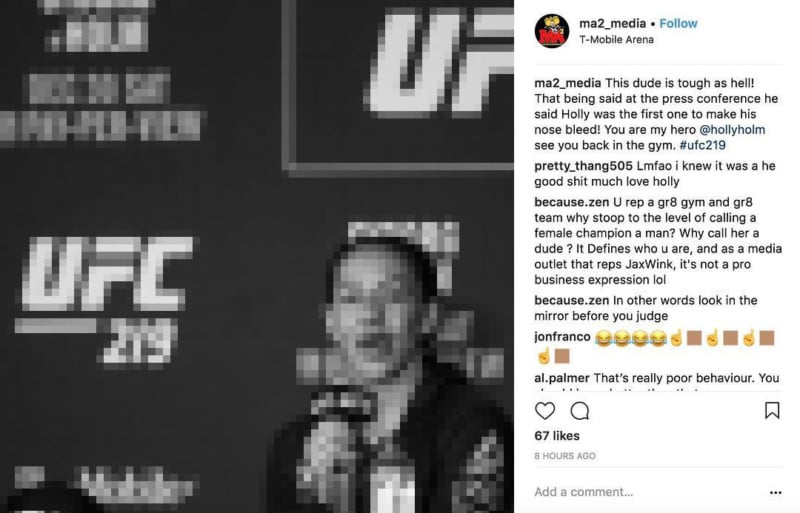 Here’s what he wrote in the caption:

This dude is tough as hell! That being said at the press conference he said Holly was the first one to make his nose bleed! You are my hero @hollyholm see you back in the gym. #ufc219

The comments were instantly met with sharp rebukes from notable UFC journalists.

The staff photographer from Jackson-Wink posted this last night. Apparently he was also credentialed to the fights. Would expect a lot more from such a well respected gym. https://t.co/EYXRLE4Vs4 pic.twitter.com/YaAMuEyJOA

This is shameful conduct. https://t.co/jLJTe9QJD0

This is unbelievable and unacceptable. A Jackson-Wink staff photographer thought it would be cute and hilarious to call Cris Cyborg a "he" over and over again. Everyone should be better than this. I hope he's never credentialed again. No place for this. https://t.co/f3vL4fuOQe

Cyborg also didn’t take kindly to being referred to as a man:

It is not acceptable for an official representative of @hollyholm @jacksonwink_mma to call me transgender following my Fight. Their official photographer was given a backstage credential to attend the @UFC and I expect an apology or their ability to get credentials for future UFC events to be affected by these actions. @ma2_media

Aragon and Team Jackson-Winkeljohn then took to social media in an attempt to explain and apologize. 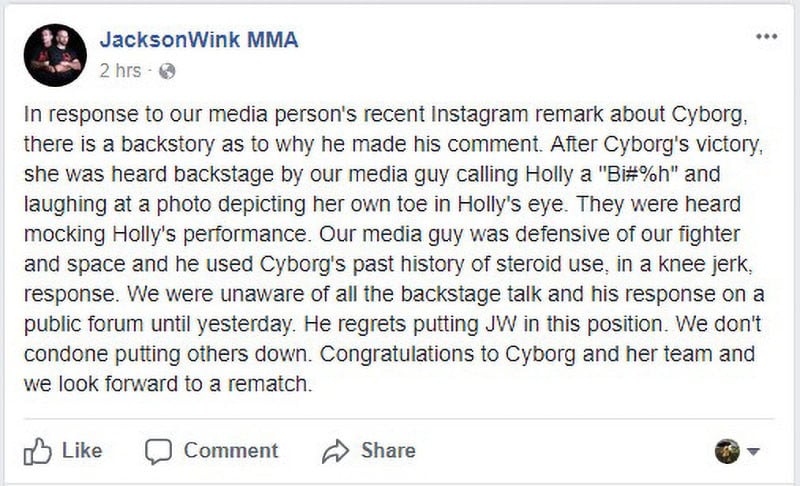 As the most hated photographer in the world today, I feel its necessary to comment on the recent fall out I’m causing for both Hollys and Cyborgs camps, and their respectful friends, fans, and families. At the conclusion of UFC 219, I took the final bus out of the arena back to the hotel and ended up on the same bus as Cris Cyborg and her team. As I sat in the back I began to hear them cheer and revel in their victory and discuss small parts of the event. A couple things really bothered me. I heard them laughing and commenting on a picture that renowned photographer Esther Lin took of Cyborgs toes literally in Hollys eye from a kick. Cyborg then went on to discuss how during clinches “the bitch” just “stayed and hugged her but she did nothing”. When I got back to the hotel I posted a picture with an inappropriate caption that everyone is now talking about. I was obviously acting out of anger and frustration. My personal emotions got in the way of my professional status which I failed to adhere to. But there is more to it, Cyborg leading up to the fight through her own Social Media accounts accused Holly and our camp of being the most drug failed camp ever. This is a totally fabricated lie and can’t be based on any merit whatsoever. Only one CURRENT athlete from our camp has ever been punished for USADA related issues and I was extremely frustrated with the perception that Cyborg and her fans had painted us as cheaters and losers.  Jackson Wink had over 60 UFC fights throughout the world and hundreds of other fighters fighting all around the world at many different organizations. Every fighter has their home team based out of whatever country or state they hail from and come here for training, some of them with their own teams. We absolutely can’t be responsible for each and every one of their daily activities. That being said I am embarrassed by my actions and I sincerely apologize to @criscyborg and her friends, fans, and most importantly her family for posting such an ugly misrepresentation of a great hard earned championship retention. I also want to apologize to the members of team Jacksonwink who were effected by that insincere post.

Cyborg responded on Instagram, saying that she accepted the apology but still hoped Aragon would be banned. 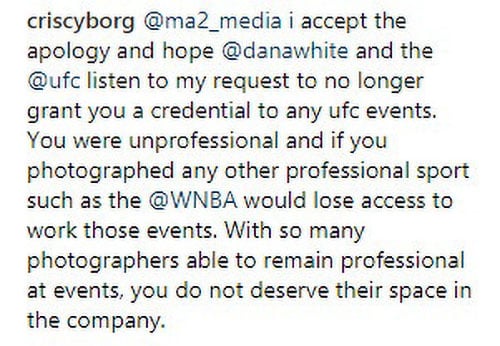 The UFC decided to take action and yesterday stripped Aragon of his press credentials, denying him access to all future UFC events.

“UFC is aware and troubled with the recent statements made by a social media representative from the JacksonWink MMA Academy in Albuquerque, New Mexico as it concerns women’s featherweight champion, Cris Cyborg,” the UFC says in a statement to MMA Fighting. “UFC does not condone or tolerate the remarks that were used.

“The organization has reached out to the JacksonWink team to inform them that the individual in question will not be granted access for future events.”

Cyborg then posted a message of thanks to the UFC:

I want to thank the @ufc for showing their support. everyone is entitled to a work environment free from sexual harassment and prejudice pic.twitter.com/u3AwIVIUkL

“I want to thank the @ufc for showing their support,” Cyborg writes. “Everyone is entitled to a work environment free from sexual harassment and prejudice.”

Image credits: Portrait of Cris Cyborg by Michael Dunn and used under CC BY 2.0

This is What Camera Bag Marketing Hype is Like