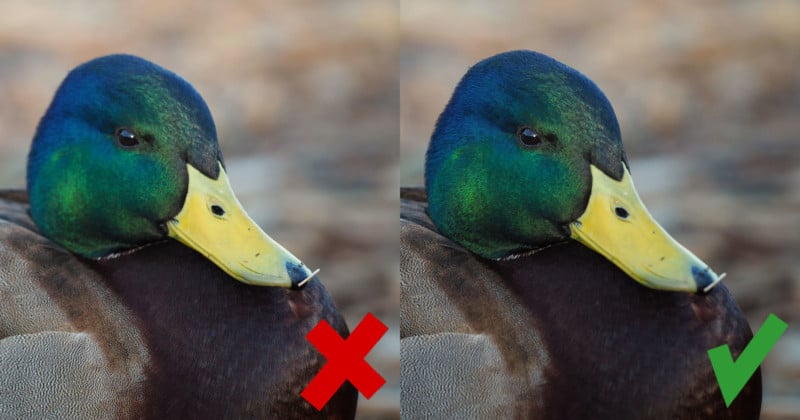 It’d be cliche to say that the eyes are the window to the soul, but they’re certainly the key to a compelling photograph. This is intuitive when photographing people and pets, but no less true for birds. It’s just that with small, fast-moving subjects, it takes more care and skill.

Always aim to photograph an eye with a bird attached. When the eye is properly captured, the rest of the bird usually follows. This post lays out 5 rules for capturing a bird’s eye, and thus a beautiful, compelling bird photograph.

Rule #1: An eye should be visible and in the sharpest focus of the image

In a creative endeavor like photography, it seems odd for there to be rules. Isn’t the goal to show something unique? Well, I could count on one hand the number of interesting bird photographs I’ve seen that either don’t show an eye or show one that isn’t in sharp focus. And I’ve certainly never managed to take one.

One of the most painful things I’ve had to do is to throw away a photo of a rare species or an otherwise perfect in-flight photo because the eye was just on the wrong edge of the depth of field.

When shooting a perched bird, it usually works well to use your lens’ widest aperture with single point focus trained on the eye. This gives the sharpest possible eye with maximum background blur or bokeh. When the subject is moving fast or flying, it’s often necessary to use a wider depth of field, f/8 or so. This, along with continuous autofocus, a faster shutter speed (in the 1/1000 to 1/2000 range), and multiple focal points, gives a better chance that the eye will be sharp.

Rule #2: The direction of the beak should be within 90 degrees (left or right) of the camera.

In other words, the bird should be looking towards the camera or in direct profile. Beginning bird photographers, myself included, tend to find this less intuitive than keeping the eye in sharp focus. But think about it terms of portraits of people. We don’t tend to photograph the back of people’s heads or people looking away from the camera.

That being said, there is slightly more room for creative expression here (e.g. in an action shot or multiple subject shot), but this is an important rule to know before you attempt to break it.

In order to get the right head position and overall pose, it’s almost always necessary to shoot in burst mode (aka continuous shooting). Birds often dart their heads in all directions, usually too fast for us to react to the right pose with a single click. When you see your subject, just focus on the head and start the burst in anticipation of its movement. Many species (especially insectivores like flycatchers) can’t help but look towards the interesting snare sound of the rapid shutter.

When going through the many exposures, just quickly delete the ones where the beak isn’t towards the camera. At the limit of a profile pose, a slight vertical oval shape of the eye betrays when the head is just slightly over 90 degrees away from the camera. It may seem subtle, but just that little turn away from the camera can severely degrade the interest of the image.

Rule #3: The camera should be the same height above ground as the eye

Not shooting at eye-level is the most common differentiator I see between amateur bird snapshots and engaging bird photographs. Birds, with their pesky wings, are often above us. Or sometimes, particularly with waterfowl, they’re below us.

It’s easy to just tilt the camera up or down, so that’s what many people start out doing. In doing so, they capture a familiar sight — the way we’re used to seeing birds every day.

A photographer’s goal is to highlight their subject in an uncommon light — to show their viewers a new way of seeing the world. A great way to accomplish that is to put the viewer in the bird’s perspective by shooting at their eye-level.

Now, getting the camera at the bird’s eye-level is easier said than done. There’s no silver bullet. It takes creativity, patience, and luck. Here are a few tricks I’ve found work well.

For birds in flight or that like to be high in trees, try going somewhere with a steep hill. The slope often works to your advantage.

Some bird preserves have viewing towers which are tailor-made for this, but also consider that a second story window into a garden is basically the same thing.

When all else fails, back up. It’s really the angle on the bird rather than the absolute height difference that matters. So using a long telephoto that lets you get a little distance away can compensate for some amount of camera tilt.

For birds on the ground, and especially floating on water, get the camera as low to the ground as you can manage. Even squatting is often not enough. A tilting view screen can let you put the camera on almost water level, or failing that, it may be necessary to lay on your stomach.

Rule #4: The light should catch the eye

That small reflection (called a catch) gives eyes that literal sparkle that makes them pop. As a nice benefit, if the light is right to catch in the eye, it usually follows that the side of the bird facing the camera is nicely lit as well.

Capturing the perfect catch usually entails just going out in the right light and keeping the sun to your back. The best light for photographing birds is low and direct. That means there are very long, sharp shadows usually found during the first and last hour of daylight. Resisting the temptation to go out photographing during other times leads to less agony over having to delete some good, but poorly lit photos.

When stalking birds, be aware of the sun position and try to keep yourself between the sun and the bird. This can be hard as it often means ignoring half of your field of vision, even if there are great birds there. The good news is that birds move around a lot, so sometimes it pays to just find a spot with good light and wait for the birds to come.

Rule #5: The eye should be properly exposed

Birds have a huge variety of eye colors, some of them striking. I love when a photograph highlights the beauty of the avian eye. There’s nothing worse than a black, lifeless disk where a pupil and iris should be.

While it’s obviously best to get the right exposure in the field, I find that most photographs benefit from increasing the eye exposure (and sometimes saturation) in post-processing. The brush or selective editing tool found in most photo editors works perfectly. Often just +0.3 or +0.7 stops makes all the difference in the world.

As I’ve been honing my bird photographs, these have been the most important rules I’ve discovered.

About the author: Tony Gentilcore, AKA the Nerd Birder, is a photographer who’s on a quest to photograph every living species of avian dinosaur. He shoots with an Olympus OM-D. You can find more of his work on his website and Instagram. This article was also published here.