Here’s a tip for the digital age: if you’re commissioned with $15,000 to create a public art installation in a large city, don’t steal photos from the Internet and pretend they’re your own. That’s the mistake one well-known artist in Canada recently made, sparking a good deal of controversy and embarrassment.

A couple of years ago, Calgary artist Derek Michael Besant was commissioned by his city to create a temporary art exhibit that aimed to make an underpass “more neighbourly” as part of the “4th Street S.W. Underpass Enhancement Project.”

Avenue Calgary Magazine reported in 2015 that Besant — a man who formerly headed the drawing department at the Alberta College of Art and Design for 16 years — visited the underpass with a camera, recorder, and notepad, photographing and interviewing passersby to capture profiles of them.

“I didn’t want to decorate anything,” Besant said at the time. “I wanted it to reflect something about the site. I thought the context of the place was more critical to address than put a picture of something in there.”

His final artwork, titled Snapshots, was a series of 20 giant Polaroid-style photos installed on both sides of the underpass. Each one contained a blurred portrait and quotes given by subjects Besant interviewed.

“We encounter all theses different groups,” Besant told Avenue Calgary Magazine. “They’re certainly concentrated in that one corridor. It’s a real a cross section of the city.”

Except the photos weren’t what Besant said they were.

Late last month, UK comedian Bisha Ali was contacted by a Canadian friend who had noticed her face staring back at him in the Calgary underpass exhibition.

My old friend who I met at Space Camp in Vancouver in 2006 just messaged me out of the blue:

"Hey Bisha! I know this is probably supremely weird but I think I saw a photo of you being used in a public art installation in Calgary…"

That's weird! Pics or it didn't happen, I say. So he sends me this: pic.twitter.com/QSX3tbx2dr

Despite the blur applied to the photo, Ali recognized it as this photo that had been taken of her by Jayde Adams: 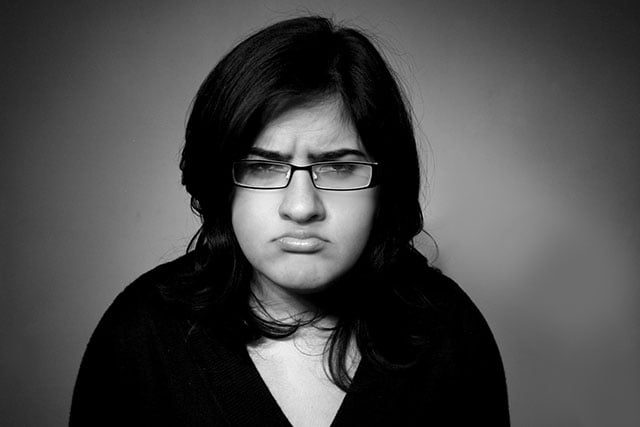 Surprised, Ali began investigating the exhibition. She soon discovered the project’s website and learned that it was a government-funded art exhibition that had a public art budget of $20,000 CAD (~$15,600).

After finding more photos of the installation, Ali realized that she recognized quite a few of the other faces in the photos — they were other comedians that she knew.

I start looking up the other photos used in the installation. GUESS WHAT? It says they're random photos taken by the artist of people who used the underpasss. GUESS. WHAT? I never been there.. AND…

This is a pic of the rest of the installation. I CAN NAME SOME OF THE COMEDIANS FEATURED: pic.twitter.com/4DEaWM5xXC

Here's another snap of the installation that I found on Google. Far right photo – that's @SofieHagen for SURE. pic.twitter.com/4ekPhoWMTr

Comedian Sofie Hagen then confirmed that it was her in one of the photos.

This is the photo btw. They edited out the horse and put “I OWN NOTHING” over my face.. um, I obviously own a little horse. pic.twitter.com/Nf6IBYYIYd

At this point, Ali knew she was definitely onto something.

TO BE CLEAR. What we have here is
– a $20k city-funded commission in Calgary, Alberta, Canada
– unpaid and uncredited photographs by at least 4 different UK photographers
– A BIG, STINKY LIE pic.twitter.com/DbZ14IEHHb

After some more sleuthing, it was discovered that Besant had lifted the photos from the program for the 2015 Edinburgh Fringe Festival of comedy — that’s why so many of the faces were of faces that Ali recognized. Nearly every face was eventually matched to a comedian in the program: 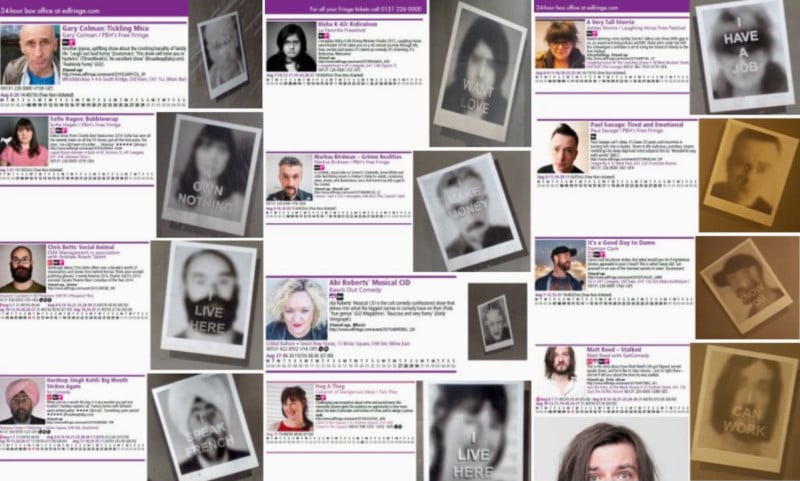 As word of this dishonest exhibition spread and controversy grew, Calgary Mayor Naheed Nenshi requested an investigation into the exhibit, Maclean’s reports. Besant responded by advising officials to take down the artworks.

After consideration, Calgary decided to take down the art last week. It appears Besant’s website has been taken down as well.

Update on 12/9/17: Artist Derek Besant has publicly apologized, saying he thought the photos were “already out in the public domain.”