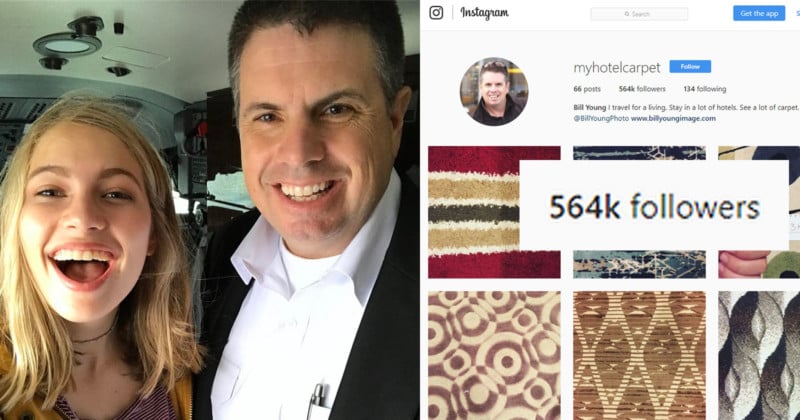 A 19-year-old daughter just turned her dad into the hottest thing on Instagram this week with a single Tweet that went viral. Her father has gotten over 500,000 new followers in just the past few days for his photos of hotel carpets.

Bill Young is a photographer and pilot who travels for a living and stays in a lot of hotels. During his stays, he sees all kinds of designs under his feet, so he decided to start an Instagram account to document the seemingly endless diversity of hotel carpets. His first photo was published on Instagram at @myhotelcarpet back on August 27th, 2015:

My #HotelCarpet #Cincinnati Airport #Marriott. I kinda like it. #travel #photography #imbored

But up until last week, no one paid attention to Young’s photos, and over two years he had managed to amass a grand total of 83 followers.

On November 25th, Young’s his 19-year-old daughter (and number one fan), Jill, came up with an idea for the perfect Christmas present this year for her dad. She would try to make his Instagram account go viral.

She posted a simple Tweet that states: “All I Want For Christmas is for my Dad’s hotel carpet Instagram to go viral, please help this happen.”

All I Want For Christmas is for my Dad’s hotel carpet instagram to go viral, please help this happen pic.twitter.com/pqCWDglFf9

Boy did it go viral. Over the next few days, Jill’s Tweet was Liked over 25,000 times and Retweeted over 8,000. After her request and Bill’s photos began spreading across the Internet, Bill’s Instagram went from having 83 followers to having over 28,000 two days later.

CRAZY DAY!!! This isn’t a “hotel carpet”, it’s my #LivingRoomCarpet but I had to upload something. Yesterday I had 83 followers. My amazing daughter @jillisyoung threw up a tweet saying “All I want for XMAS is for my Dad’s @MyHotelCarpet IG to go Viral.” Well BOOM!!! I was in a class all day and had to turn off my phone. Thanks a ton to my awesome daughter (sophomore at UT Austin) for this 30 seconds of internet fame. 😍!!

But that was only the beginning. Soon the Instagram account was being covered by the mainstream media and the largest publications on Earth.

My dad has over 15.5k followers on instagram now, thank you for making my christmas dream come true, this literally insane https://t.co/AY2aDSM98n

anyway my dad's hotel carpet account has over 20k followers (!) and he's officially cooler on the internet than I'll ever be– I'm so proud

so excited and amazed by all the support! if y’all get my dad on @theellenshow or @fallontonight i’ll get him to do a dramatic slam poem about hotel carpet with me! @myhotelcarpet

At the time of his writing, Bill’s Instagram now boasts over 565,000 followers.

Shooting Product Photos with a Single Speedlight by Painting Light