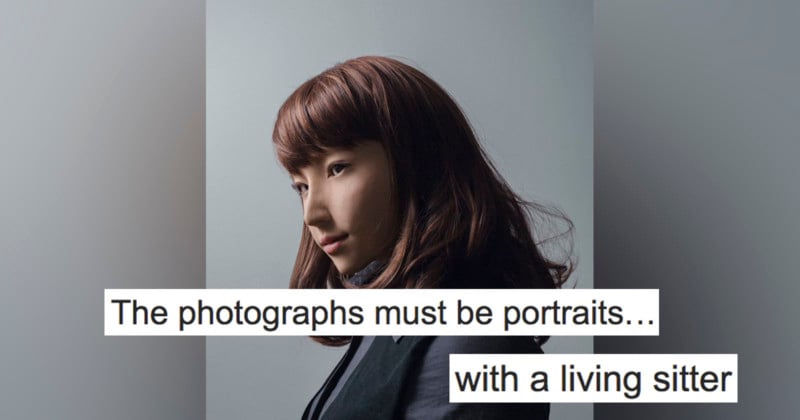 The Taylor Wessing Photographic Portrait Prize at the National Portrait Gallery in the UK calls itself “the leading international photographic portrait competition” and says its mission is “celebrating and promoting the very best in contemporary portrait photography.”

This year’s winners were selected from 5,717 entries and were just announced this week. First place (and the £15,000 prize) was awarded to photographer César Dezfuli for his portrait of a migrant rescued in the Mediterranean Sea off the Libyan coast.

But the 3rd place photo is also attracting quite a bit of attention. Captured by Finnish photographer Maija Tammi, it shows a Japanese android (i.e. a robot designed to look like a human) named Erica.

Tammi’s photo was captured at an experimental laboratory in Osaka Japan, and her work is meant to explore the intersection between science and art.

“I had half an hour with Erica and a young researcher in which to take the photograph,” Tammi tells the BBC. “The researcher told me that Erica had said that she finds Pokemon Go scarier than artificial intelligence.”

Here’s what the judges had to say about the photo:

During the judging process, only the title of each portrait is revealed. It was unclear whether the girl was a human or an android, and this ambiguity made the portrait particularly compelling. Tammi’s portrait offers a provocative comment on human evolution.

Some people are naturally questioning how a photo of a robot managed to win a human portrait contest, especially given that the contest’s rules say that photos should portray “living” people.

“The photographs must be portraits,” the official rules state. “‘Portrait’ may be interpreted in its widest sense, of ‘photography concerned with portraying people with an emphasis on their identity as individuals’.

“All photographs must have been taken by the entrant from life and with a living sitter after 1 January 2016.”

In a statement to the BBC, the competition says that it acknowledges that the portrait broke the rules, but the organizers decided against disqualifying it:

The gallery has decided not to disqualify this portrait though accepts it is in breach of the rules. The rules are reviewed every year and this issue will be taken into consideration for next year.

The Taylor Wessing Photographic Portrait Prize is dedicated to showcasing the best in contemporary portraiture.

“There are occasions when particularly compelling portraits raise interesting questions about the genre of portraiture, and these may be included at the judges’ discretion.

Tammi’s photo and 58 others will be on display at the National Portrait Gallery through February 8, 2018.

Hasselblad Launches Its Own ‘Rent a Hasselblad’ Service