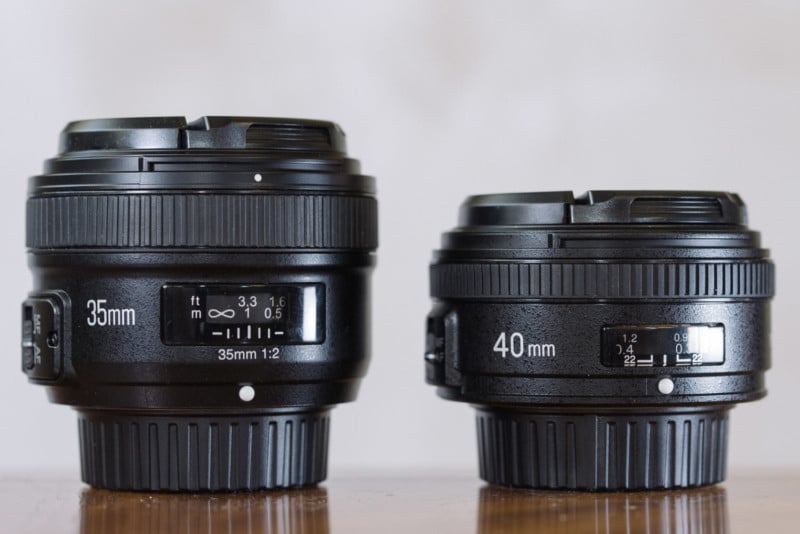 As far as I am aware, Yongnuo’s latest entry in its ultra-cheap prime lens lineup is the first F-mount 40mm pancake lens that features autofocus. I was excited to hear the announcement back in September as I’ve always been jealous of Canon users and their 40mm f/2.8 pancake lens with its ridiculously slim profile.

The closest we have for Nikon’s F-mount is the manual focus Series E 50mm f/1.8 lens, the manual focus Nikkor 45mm f/2.8 lenses, and the manual focus Voigtländer 40mm f/2 lens. I’ve longed for an F-mount autofocus pancake lens since I was first struck with GAS, and now with Yongnuo’s release, it looked like I would finally be getting my fix.

Alas, all of the merits for this $94 lens aside, its biggest failing is its utterly incompetent autofocus capabilities.

I didn’t venture far with this lens beyond my yard, and I don’t think I will in the future either. These images aren’t quite scientific and they certainly aren’t artistic, but they should give you an idea what you’re in for if you choose to part ways with $94. Minor global adjustments to tone were made in Lightroom with no changes to sharpening or noise reduction. All pictures were taken with a Nikon D750.

The bokeh is altogether not unpleasant to my eye – a clumsy way of phrasing that it shouldn’t matter too much in pictures taken with this lens. There is an aspherical element in there which can make this lens prone to “onion rings” in specular highlights if you care about such things. I don’t.

Pixel peepers can find some modest chromatic aberration at wide apertures which you would expect for a lens that costs $94. I personally don’t concern myself too much with defects that can be corrected with one click in Lightroom.

More Thoughts on the Autofocus

My default setting for autofocus areas is a central group of 21 points, which this lens never could figure out. I wound up shooting most of these pictures with a single central point of focus. Eventually, I got some minor improvement by switching from AF-C to AF-S, though at no point for any of these pictures was this lens free of egregious, conspicuous hunting.

Phase detection autofocus through the viewfinder exhibited hunting was just as bad as live view. And this was in broad daylight! I held my finger on the shutter waiting for focus to lock on this contrasty-as-all-hell mailbox and it never landed.

I tried three more times and every test was just as bad as the first. Autofocus this awful is unforgivable; couple that with terrible manual focus and there just aren’t enough good points left for me to recommend this lens to anyone.

Those of us waiting for a useable autofocus-capable pancake lens for Nikon still have some waiting to do. I will say that I’ve had some good experience with Yongnuo’s 35mm f/2 prime lens, though most online reviews disagree with me. It’s not a perfect lens, to be sure, but the autofocus on the 35mm is usable and does not hunt nearly as bad as their 40mm lens. And I’m glad there’s another company out there making inexpensive prime lenses to spur on some competition.

Hopefully, in the future, Yongnuo can release a firmware update that will fix these glaring flaws. And since we’re hoping, maybe Nikon will get the picture and release a solid Nikkor 40mm f/2.8 pancake lens of their own. As it stands, for F-mount autofocus pancake lenses, Yongnuo is the only game in town, but it’s a game nobody should play.

About the author: Cody Cobb is a photography enthusiast and medical student. You can find more of his work and writing on his website, 25 Photographs. This article was also published here.

The Role of the Slit-Scan Image in Science and Art