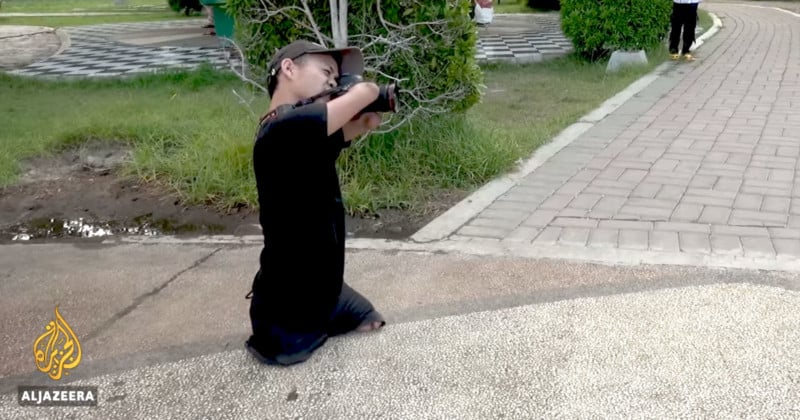 Want to see what a passionate photographer looks like? Just look at the life and work of 25-year-old Indonesian professional photographer Achmad Zulkarnain. Despite being born without hands and legs, Zulkarnain became interested in photography and has since made a name for himself as a photographer and retoucher.

Here’s a 4-minute feature on Zulkarnain that was just aired by Al Jazeera English:

Zulkarnain, who goes by the artist name DZOEL, first became interested in photography while working at an Internet cafe that had photo services. He eventually purchased a camera on credit, learned more and more about the craft, and eventually became known in his region for his photography services. In addition to shooting and retouching, Zulkarnain also teaches others about photography.

“I have my own way of doing things,” Zulkarnain tells Al Jazeera. He doesn’t have fingers, so he pushes his camera against his face while using it. Switching the camera on and off is done with his mouth, and he uses the extra bits of skin on his arm to press the shutter.

To get around from place to place, Zulkarnain drives a custom go-kart-style vehicle he designed, which his friends and family helped him built.

Here’s a look at some of Zulkarnain’s portrait work:

Sony and Manfrotto Are Teaming Up to Create New Pro Products