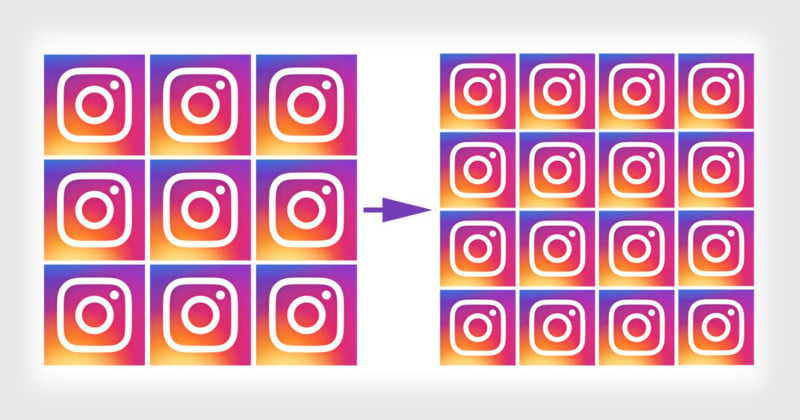 Instagram has long featured a 3×3 grid of photos across its platform, allowing photographers to get creative and create larger photo mosaics by uploading the individual pieces as separate photos in the correct order. If you’ve spent a considerable amount of time and effort building these mosaics yourself, here’s some bad news: it looks like Instagram may soon break that classic grid (and your mosaics).

The Ringer reports that a number of Instagram users across the Web have noticed 4×4 grids on their accounts.

My instagram now shows my feed as a 4×4 grid. I can feel the internet getting ready to explode. pic.twitter.com/bBDrFl0cod

Some users aren’t pleased about it, since switching to 4×4 completely messes up the look of existing 3×3 mosaics. What were once clever mosaics are now seen as a jumbled mess of images. Here’s a sampling of some of the complaints that have been posted, pleading with Instagram to not break existing mosaics by changing the layout:

Disrupting my grid? 🤔 What if #Instagram was just looking to disrupt what has become of its platform? https://t.co/2mvlKdVQR6 via @WeRSM pic.twitter.com/K4zKCkdaHE

Even people who don’t post 3×3 photo mosaics often upload photos in a particular order based on how it makes the resulting grid look — the position of photos relative to each other is disrupted.

Is everyone else's Instagram doing this?! My whole grid looks off now! Yo @instagram can we discuss this? pic.twitter.com/SPIxGNtVI8

Instagram never promised that the 3×3 grid would be a permanent feature of the service, so photographers who relied upon it for carefully planned layouts were trusting in a design choice that has always been subject to abrupt change. If you’ve spent years uploading 3×3 mosaics to Instagram, you may soon have to live with a profile filled with scrambled up pictures.

Speed Up Photo Viewing in Lightroom with 1:1 Previews