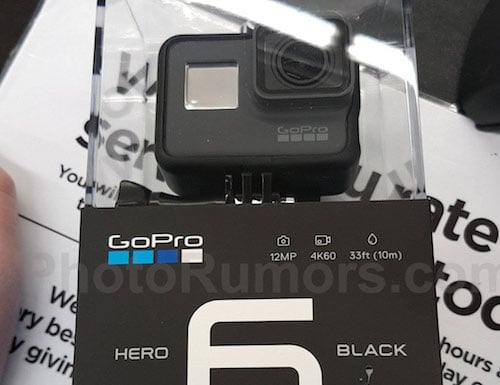 The GoPro HERO6 Black has apparently just been leaked in a photo before any official announcement, and the camera looks like it will offer 4K video recording at 60 frames per second.

Photo Rumors just received this photo from a reader: If this leak is real, then it looks like the camera will be capable of 12-megapixel still photos and 4K/60p video. By comparison, the current HERO5 Black can do 4K at 30fps.

“The new model will be very similar to the latest HERO 5 version,” Photo Rumors writes. “The official announcement (or release date) is rumored for September 28th.”

If the physical design of the camera isn’t changing with this latest generation, then GoPro owners will still be able to use their current HERO5 accessories on the new camera.

GoPro CEO Nick Woodman teased the existence of the HERO6 back in February, saying that the camera would arrive in 2017.

“The real question here will be one of price,” writes Engadget. “Competitor Yi’s 4K camera captures UHD resolution at 60 FPS too, and for $340. GoPro’s Hero5 currently sells for $400 on Amazon.”