Photographer and Sony Imaging Ambassador Manny Ortiz made this 6.5-minute video sharing the top 5 reasons he chose a Dell XPS 15 laptop over a MacBook Pro in 2017 for his photo and video editing needs. 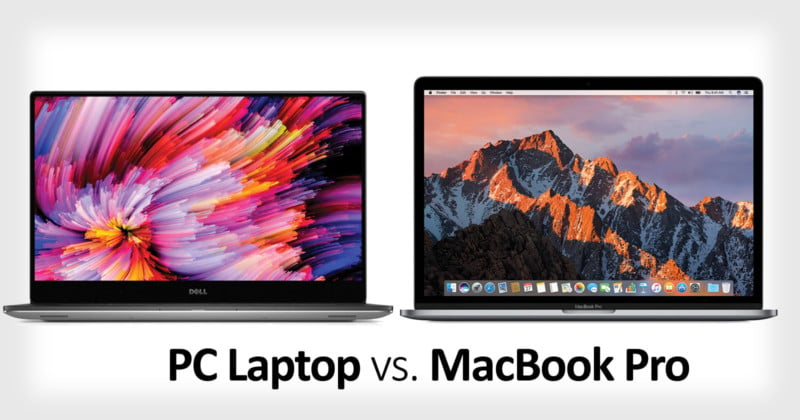 Ortiz says he was looking for something powerful enough to edit 4K video yet small enough to be ultra portable, since Ortiz often edits away from home. After narrowing his search down to the Dell XPS 15 and the new Apple MacBook Pro, here’s what swayed Ortiz toward the Dell:

The Dell had equivalent specs to the MacBook Pro yet cost about $1,000 less.

“I couldn’t find a reason to justify spending $1,000 just to get the MacBook,” Ortiz says. “Price played a huge factor in this decision.”

Even though the MacBook is $1,000 more expensive, you’ll need to purchase and keep track of pricey dongles and adapters since it lacks an SD card slot and many other common ports (replacing all of them with 4 Thunderbolt 3 ports).

“I’m not ready for the dongle life,” Ortiz says. “I’m going to try and stay away from it as long as possible.”

It’s generally easier to upgrade the hardware components of a PC laptop than a MacBook. Especially with the latest MacBook from Apple, the processor, RAM, and SSD are soldered onto the logic board, making it virtually impossible for the average person to do an at-home upgrade.

The Dell XPS 15 features a multi-touch screen, something Apple has yet to introduce in the MacBook line, though now the MacBook does have a Touch Bar.

“I truly love using the touchscreen on a computer,” Ortiz says. “The Surface Pro 3 got me hooked on touchscreen, and I don’t think I could ever have a laptop without it.”

The Dell has never had a hiccup while editing 4K video from all of Ortiz’s cameras and devices.

“The rendering times are really, really impossible,” Ortiz. “This just kind of sealed the deal for me.”

As you might expect, any discussion about PC versus Mac brings out heated arguments from passionate devotees in both camps. Ortiz says he’s not trying to hate on Apple, but that these are the personal reasons that made sense for his needs.

“I’ve been using Mac and Windows for a long time,” Ortiz says. “I truly don’t have a preference. I like the both for their strengths, and they both have weaknesses. And there are some reasons that really entice me to get the MacBook. For the most part, I’ve had less problems with my Mac products than my PC.”

“I just want to clarify for those who didn’t watch the whole video that this isn’t a Apple hate video,” Ortiz writes. “It’s just come to a point where the MacBook has gotten so expensive that I can not justify paying $1,000 more for one.﻿”

The BlackRapid WandeR is a Universal Strap for Smartphone Photographers