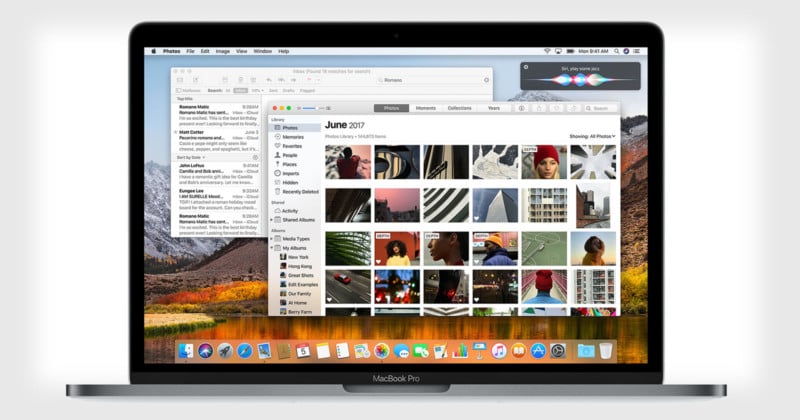 Apple announced High Sierra, the next version of their macOS, at the Worldwide Developer Conference last week. The final version will be available later this fall.

This new macOS has at least two changes to it that everyone needs to pay close attention to: (1) 32-bit apps will no longer be supported in the future (in App Store starting June 2018, in macOS fall 2019) and (2) a new file system is going to be installed during the update process.

The 64-bit requirement is going to catch a lot of folk by surprise, I suspect. Not initially, as High Sierra will continue to support 32-bit apps. But note that autumn 2019 date carefully: things go boom then when Apple introduces their latest macOS then. You’ll get warnings before that.

Go to the Apple menu, select About this Mac, click on System Report. In the window that eventually appears, click on Applications (under Software in the left-hand column). It’ll take a while for the system to compile all the information, but eventually you’ll get a list of software in the right-hand side: 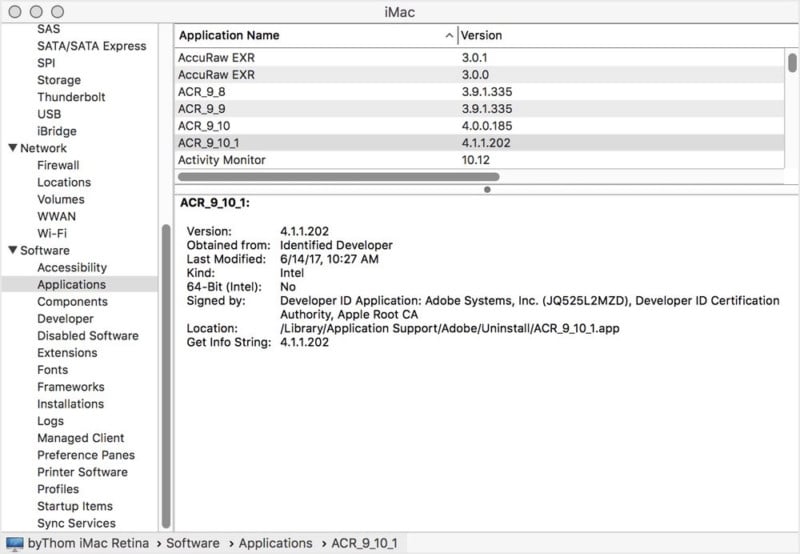 What you’re looking for is the data for 64-bit (Intel). The header at the top of the upper right display is probably truncated (as it is above) when you first see that list. Scroll over in that upper right pane and you’ll find a column that’s 64-bit. Click on that heading and the apps will get sorted by No/Yes. As one of this site’s reader suggests, just select all the No apps and copy and paste that into a text document so that you have a record of potentially problematic apps to keep track of in the future. The good news is that apps you got from the App Store are likely to get 64-bit updates because otherwise their developers will get booted from the store next June.

Note that Adobe ACR is currently not 64-bit! Indeed, I found quite a bit of Adobe software (mostly installers and uninstallers) that is still 32-bit.

Which brings up the question: is Creative Suite 6 64-bit? (e.g. Photoshop CS6, which many of you are still using.) Yes, it is. But again, some of the installer/uninstaller/auxiliary software in CS6 is not, and even some of the apps in CS6, such as Dreamweaver, are not.

I also found 32-bit software on my system from Alien Skin, Blackmagic Design, Apple’s own Compressor, Fotomagico (any slide show saved as an executable), the IPTC editor I use for my D5, Microsoft Office (all pre-2016 versions), the Nik Collection plug-in tools, many Nikon software installers, the Olympus camera updater, Photo Mechanic(!), and more.

In short, updating to the new macOS could eventually become a cataclysmic event for some when the 32-bit window eventually closes in 2019. If nothing else, it will trigger a fair amount of application updating between now and then—assuming the developers in question continue to update their products. At worst case, things you may rely upon, like [Update: See below], will eventually just die when the deadline passes.

So now is the proper time to start thinking about how you’re going to migrate, if necessary. You’ve got at least a year to 64-bit your system. And yes, you’re going to want to update to High Sierra and future macOS versions, because Apple has gone to a system where they only update camera support with the current macOS, among other things that can trip you up. A number of the non-Adobe converters use the macOS camera support for raw files, so they’d fail to work with raw files when you get a new camera if you didn’t update to High Sierra.

Now, on to that second change you need to know about: the filesystem.

Amazingly, Apple just pulled the same thing off with iOS: during an iOS update they completely swapped out the underlying file system you were using with another. You didn’t notice, did you? ;~)

This is a bigger change than when Microsoft went from FAT to FAT32 or exFAT. Apple is trying to move all their products to APFS, a more modern implementation than the HFS+ version they’ve been using. Among other things, it allows snapshots, clones, increased number of files, improves data integrity, avoids metadata corruption in system crashes, and much more.

But moving to APFS means that every bit of at least the metadata on your hard drives needs to be looked at and potentially moved or changed. Metadata is simply managed differently with the new system. For those of you on the more technical side, HFS+, CoreStorage, Fusion, FileVault2, and Time Machine systems are all directly impacted by the change, as is the boot process.

Note that I mention metadata as opposed to data. In the initial update High Sierra will leave your data in place, but change the metadata pointing to and referencing it (e.g. directory data).

APFS has already replaced HFS+ on iOS, tvOS, and watchOS. It’s now macOS’s turn for the change. What this means is, that during the High Sierra install process, the file system of your primary drive partition will be attempted to be updated. Changing other partitions and drives to APFS will be optional, and can also be done later using Disk Utility. But in your boot partition metadata is going to be touched, changed, and moved.

More so than any other macOS update, you should do the following: make backups of all attached drives and detach those backups before doing the High Sierra update. If nothing breaks, you’re good (plus you’ve got a backup!). If you’re paranoid, you can do a file comparison between the new system and the backed up one. If something went wrong, you have the backups to get you back up with your old system.

Note that Apple did a lot of testing on the HFS+ to APFS swap on iOS. They actually tested it with multiple iOS updates without actually finalizing the new data set during the update (which is one reason why those updates took so long to perform). The expectation is that simple macOS system updates shouldn’t encounter any issues. If you use Bootcamp, use NAS drives, or have a drive that’s been partitioned other than the standard way, you’ll want to be careful and look to the Macintosh sites for help before making the High Sierra update, I think.

Update on 6/21/17: It looks like Nik Software actually does support 64-bit compatibility across its range of plug-ins.