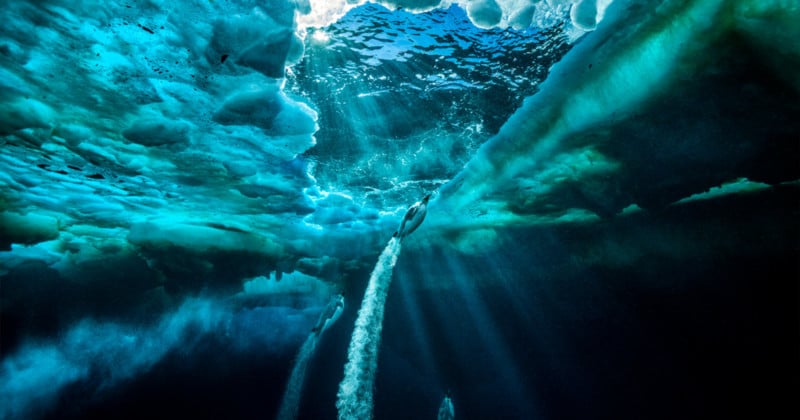 National Geographic photojournalist Paul Nicklen has spent decades documenting the Earth’s poles. In this 45-minute interview with NPR, he discusses the dangers of his work and the impact of climate change on the fragile, icy ecosystems that he photographs.


Nicklen is one of the world’s most acclaimed nature photographers, and has received over 30 of the highest awards given to any photographer in his field, including the BBC Wildlife photographer of the year and the prestigious World Press Photo for photojournalism.

Having spent the last 2 decades documenting the Arctic and the Antarctic, he has a wealth of experience and knowledge to share about the hostile regions, and he has watched them change over that time.

In the interview, Nicklen talks about one of his favorite images, which was taken in Svalbard and used by Al Gore to illustrate the impact of climate change.

We came around down behind the ice cap of Nordaustlandet at the north east ice cap of Svalbard just to get out of the wind from the storm. And as the light hit this ice face of the ice cap, to look back and to see not only was, you know, the outside temperature 68 degrees Fahrenheit, but to see 20 waterfalls in a row just gushing off the top of this ice cap. And then you start to tie that to the science that’s coming out, that it’s the first time in recorded history that the entire ice cap of Greenland is melting.

You can listen to the fascinating full interview at the top, which aired on NPR’s Fresh Air program. If you’re more the reading type, you can find the full transcript here.

The images below form part of Nicklen and partner Cristina Mittermeier’s exhibition The Water’s Edge, about which you can find more information at Paul Nicklen Gallery.

Image credits: Photographs by Paul Nicklen and used with permission.