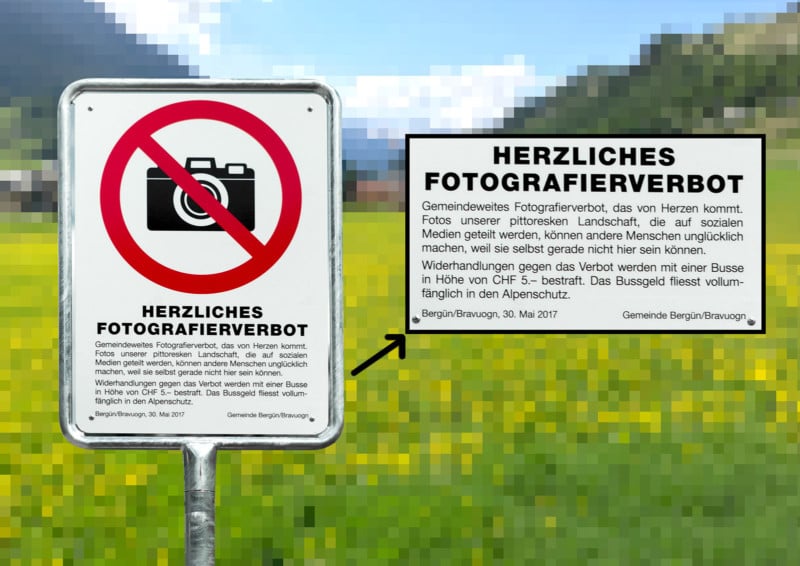 A tiny Swiss village has just passed a law that bans people from taking photos. Why? Because they want to save you from the pain of FOMO, or the fear of missing out.

The Telegraph reports that the village of Bergün/Bravuogn, which has a population of about 500 people, announced the new law on Tuesday after a 46-to-2 vote by the local council.

From now on, everyone caught sneaking a photo in the picturesque village will be issued a “symbolic” fine of 5 Swiss francs, or about $5. The town writes that they “reserve the right to grant” that fine.

“From today on, a community-wide photographing ban comes into effect in Bergün, which comes from the heart,” the town announced on its website. “The reason: photos of the picturesque landscape, which are shared on the social media, can make other people unhappy because they themselves can not be in Bergün.”

“It is scientifically proven that beautiful vacation photos on social media make the viewers unhappy, because they themselves can not be on the spot,” the statement continues. “The municipality of Bergün/Bravuogn wants to prevent this because of the happiness of all people and because it has a particularly picturesque landscape to offer. A community-wide and cordial photographing ban was decided.”

“”I am very pleased that the happiness of all people is at the heart of the inhabitants of Bergün,” says town President Peter Nicolay. “That makes me proud.”

He’s encouraging visitors to respect the photography prohibition and to enjoy the landscape “with their own eyes.”

The town is also reportedly planning to remove photos of itself from its website and Facebook pages to force people to actually visit to see its beauty.

Update on 6/3/17: The town has “lifted” its photography ban, and this little PR stunt has made its name better known around the world. Well played, little town. Well played.