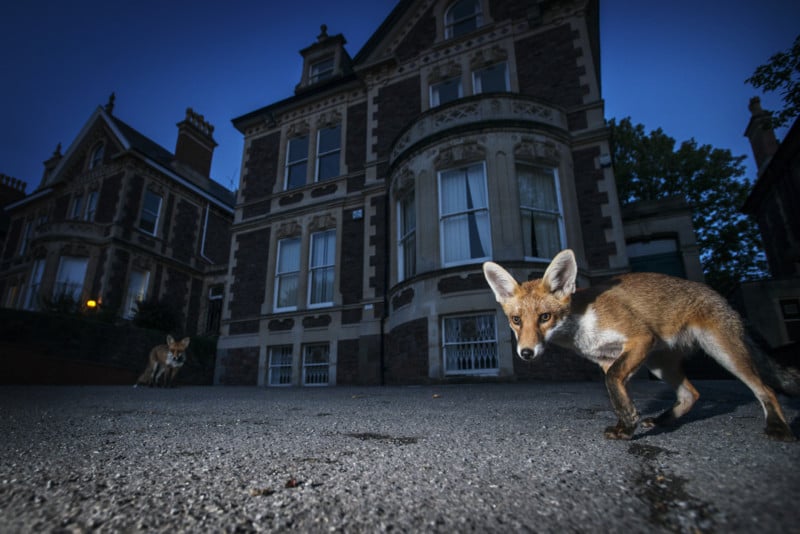 Bristol, UK-based Sam Hobson is a wildlife photographer with a difference from others: he primarily shoots wildlife that he can find in and around cities: foxes, badgers, deer, toads, squirrels, herons, ravens, pigeons, goshawks, falcons, gulls and others.

“Working with what’s on my doorstep has tons of benefits,” Hobson tells PetaPixel. “Getting to know my subject is probably the most important element of my photography. Shooting close to home means I can regularly visit the same locations, work with the same animals and really get to know the habits and routines of my local wildlife.”

“Shooting the same thing over and over and building a project, you learn things about your subject you can’t learn from books and the Internet. So you start to think more creatively about how to capture your discoveries in an image.”

“To me, the idea of urban wildlife not being ‘wild’ is a question I don’t think we’ve got time to go into!” says Hobson.

Hobson grew up in the city and was fascinated by the bugs and birds in his backyard. His neighborhood was his to explore and discover all the hidden places where wildlife was present—the kind of things adults don’t have time to pursue.

As a young kid, he had a fondness for the birds in his local park, and he would often come home with stories of interesting birds he had seen. But his family would often give him blank stares. So he found himself a camera to record the evidence, and that’s what he does to this day: record urban wildlife, in more and more creative ways.

It is not possible to get intimate photos of foxes by just visiting their lair and snapping away. The animals will immediately sense an intruder in their space and go into hiding.

Hobson believes in developing a relationship with his wild subjects. Instead of chasing the animals with long lenses he goes to the spot regularly till the foxes treat him like a local fixture and realize that he means them no harm. This is the same way that a pride of lions will treat a photographer’s Jeep as a natural object and go about their buffalo hunt as though nobody is present.

“I just sit around night after night and wait until I become a part of the environment and the animals get inquisitive and want to come and investigate me,” explains Hobson. “In my experience, animals aren’t stupid and they can tell the difference between me and somebody else. They don’t get habituated to humans, but learn to recognize me as an individual and learn that I am not a threat.”

This technique can sometimes lead to embarrassing situations. The foxes can be comfortable interacting with Hobson sitting on the ground in the middle of the night taking photos while they go about their business when suddenly they hear footsteps. They scamper away leaving Hobson looking like a weirdo photographing overflowing trash cans. But it can also result in photos of foxes behaving naturally as they search for food.

In the wild foxes may respond to calls created by kissing the back of the hand that mimics a rabbit in distress. Urban foxes do not respond to that, as there are few rabbits in their diet. Hobson does make sounds, but it is only to let the foxes know that it is somebody they know.

“I know a local old guy who sits on the same bench in the park and he’s been there so long, if he sits down and makes a few squeaky noises, a bunch of squirrels and birds come running out of the bushes to greet him,” remarks Hobson. “As long as you make the same sound every time, it doesn’t matter what sound it is. So I just turn up, make a few squeaks and if the foxes are in the area, they come out to say hello.”

The photo above of a vixen nursing her cubs was taken with a wide-angle lens.

“That was a one-off and that vixen was on pretty high alert as you can tell by her right ear. She was constantly looking and listening out for danger as this was an incredibly vulnerable moment,” explains Hobson. “I was invited by a family to come and photograph the cubs in their garden, so after learning where the vixen liked to feed her cubs, I replaced a flower pot with my camera hidden inside a sound-proofed box and waited inside the kitchen with a remote trigger, whilst politely eating the lasagna I had been made.”

It turned out to be his lucky day as the fox very shortly came out to suckle her young. Hobson shot only one frame, but she looked so nervous — maybe she heard the muted shutter — that he left her and the cubs to enjoy their meal. Hobson uses remote triggers to capture many of his photos.

“I can’t give you an exact percentage, but a lot,” he says of taking remote captures. Hobson prefers remote triggers to camera-traps so that he can get a perfect relaxed pose rather than a timid animal. Also, he can wait for the right moment and perfect position before clicking the shutter.

Hobson prefers to shoot after dark as mammals are more active and there are fewer people around. At night weather is not a problem. If it has rained, it may even look better with the streetlights shining off the wet road or puddles.

The combination of streetlights and their colors combined with the ambient lighting gives an opportunity to get creative. Even headlights can create interesting reflections.

“I use a variety of lights, strobes and gels. I guess maybe people are put off shooting at night as it might seem a little technical, but it’s worth it if you make an effort,” reasons Hobson.

In Hobson’s experience, the thing that most startles an animal at night is the combination of flash with the noise of the shutter. If the camera is in a sound proofed, Pelican case with the camera set at a high enough ISO, it will need only a low-powered flash burst, and the animal will not even blink.

“I’m usually using multiple flashes, so none of them are flashing the animal directly in the eyes and I set up my triggers not to fire multiple bursts in quick succession. If I thought I was going to startle an animal or disturb its natural behavior I simply wouldn’t do it. It’s not worth it for the sake of a picture,” says Hobson.

The UK does not have an overabundance of urban wildlife. Besides foxes and badgers it’s slim pickings for the urban wildlife photographer. Fortunately, Hobson also enjoys photographing seabirds of which there are plentiful in Bristol as well as the entire UK. During seabird season he spends as much time as he can in the islands around the UK. He has also modified a van into a camper so that he can travel to Europe and shoot more there. And there is a plan to do wildlife photography workshops as he travels.

“In Berlin, goshawks can nest in city parks right above where people hang out and have a few drinks or a barbecue,” says Hobson. “In the UK, goshawks are known as the phantom of the forest as they are so rare and elusive.”

“It seems to be that whatever is common in an area seems to be taken for granted and ignored, so those are the stories I look for and you don’t have to travel far to find them.”

“Urban wildlife photography has the power to reconnect people with nature by reminding them that we can and do coexist with it, even in the heart of the city,” emphasizes Hobson. “It makes the place they live exciting if they see a picture of an impressive animal in a familiar location. It encourages them to think more about wildlife, perhaps care more about it, want to protect it and even think about wider conservation efforts.”

Image credits: All photos © Sam Hobson and used with permission

Choosing Where to Take Photos in a Family Home