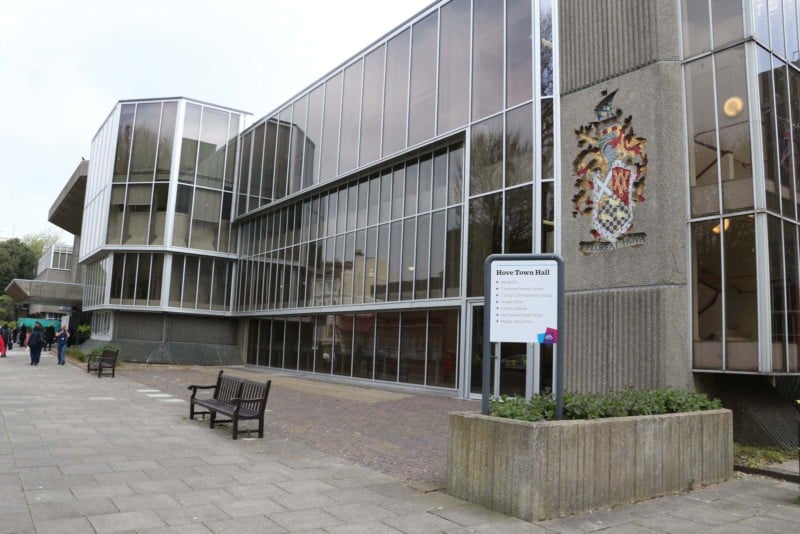 A BBC photographer was detained for an hour in the UK this past Thursday under the country’s anti-terror. His offense? Shooting photos of a town hall.

The Guardian reports that photographer Eddie Mitchell was taking pictures outside Hove Town Hall when a passing civilian police staff member questioned him. After Mitchell declined to explain who he was or what he was doing, The Guardian says, he was detained under Section 43 of the UK’s Terrorism Act, which allows law enforcement to stop and search people they “reasonably suspect to be a terrorist.”

The Sussex police force tells The Guardian that officers suspected the photographer of being a terrorist because he declined to “provide information or identification,” and that if he had cooperated the situation would have been quickly resolved. Here’s the stop and search form that was given to Mitchell: 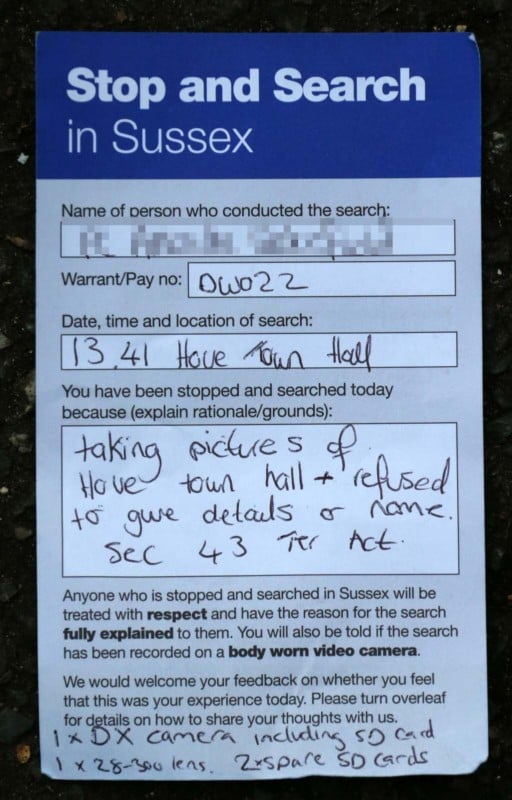 But Mitchell disagrees with The Guardian and the police on what happened: he says he did explain what he was doing multiple times.

“They didn’t ask for my name until 30 mins in,” the photographer tells PetaPixel. “I was stopped and questioned by a civilian member of staff who asked what I was doing I answered her three times — they were just not the answers she wanted to hear.”

“I told her three times I am a photographer taking pics of the town hall,” he continues. “She then asked me to make a formal statement inside.”

“Police civilian staff are warned never to wave around their police badges in case the public believe they are police officers,” Mitchell says. “I thought she was, hence I followed her into the pop up police station.”

Mitchell says that after going inside, he was approached 20 minutes later by two police officers.

“They then asked for my name and I refused on the ground of taking a picture of a town hall is not, and never will be, a criminal offence,” Mitchel says. He says he spent about an hour standing around, sitting down, and being publicly searched.

“They got very upset that I knew the law and they didn’t,” Mitchell says. “In a sheer desperate maneuver they rolled out the terror act. Complete abuse of power.”

After examining his camera and photos, police concluded that the photographer was not a terrorist and released him without charges.

“As a result of the search, which included the camera equipment he was using, it was established that his activity was not suspicious and he was allowed to leave,” they write in a statement to The Guardian.

As controversy over the detention grew, Sussex Chief Constable Giles York released a statement defending his officers and calling them “heroes.”

“We are operating in challenging times,” York says. “The terrorism risk nationally remains severe, and in view of recent events I expect my staff and the public to be vigilant and report unusual activity.”

“I totally support and am immensely proud of my officers and staff and I try really hard to recognise personally their ‘everyday heroism’.”

The National Police Chiefs Council officially says that photography is not a crime.

“Police should not prevent anyone from taking photographs in public,” its guidance says. “This applies equally to members of the media and public seeking to record images, who do not need a permit to photograph or film in public places.”

Mitchell says he’s planning to meet with a barrister in London next week to discuss this incident.

Correction on 5/8/17: In our original report, we stated that the photographer had been “arrested.” We’ve changed this to “detained,” which the photographer confirms. Here’s a statement provided to us by the Sussex police:

A man who was taking photos of Hove Town Hall was politely asked by a member of police staff why he was doing so and declined to give a reason or identify himself.

He was invited into the police front office where he was spoken to by two police officers, but he continued to refuse to provide information or identification and as a result was searched under Section 43 of the Terrorism Act.

As a result of the search, which included the camera equipment he was using, it was established that his activity was not suspicious and he was allowed to leave.

Chief Superintendent Lisa Bell, divisional policing commander for Brighton and Hove, said: “I am satisfied that the action my officers took was completely appropriate when the threat level is at severe, meaning an attack is highly likely. If the man had identified himself, then the matter could have been resolved in minutes.

Image credits: Photographs by Eddie Mitchell and used with permission