Here’s a gorgeous nighttime timelapse shot from a different perspective: this “FlightLapse” was captured from the cockpit of a Swiss airliner during a flight from Zurich, Switzerland, to Sao Paulo, Brazil. It shows the world, glowing cities, and other airplanes passing below the Milky Way above.


The timelapse was created by 30-year-old Sales Wick, a photographer, film producer, and airline pilot based in Switzerland who’s also the founder of the film agency SkyProduction.

“Flying through the night, while the world beneath us is at sleep, is a pretty common thing as a long haul pilot,” Wick writes. “The latter is the case for my flight today across the Atlantic Ocean to South America. Our flight is packed and some 340 passengers are settling in for a long night flight.”

Here’s the route Wick was flying on the Boeing 777: 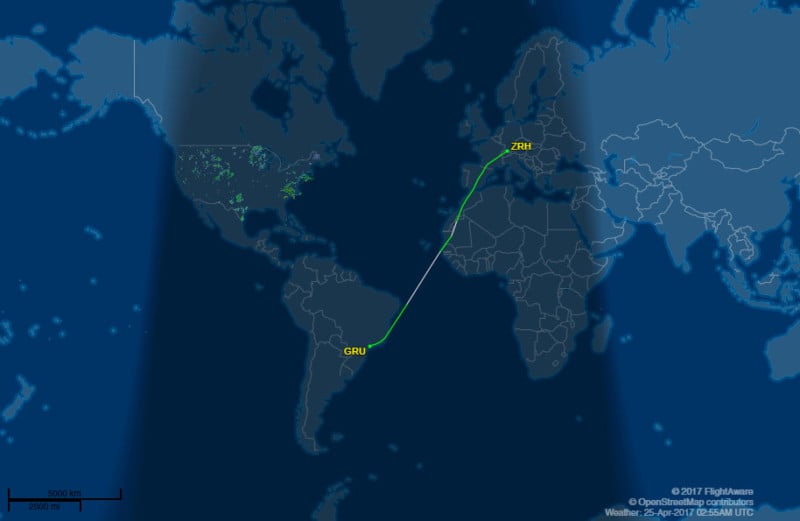 “It’s my turn to be at the flight deck for the first part of the journey, as my other co-pilot gets the chance to rest in the crew bunk above the passenger cabin,” he continues. “We are heading our westbound, along the clearly visible Alps to our left.”

Wick shot all the still photos using a Sony a7S and a 35mm f/1.4 lens. You can find more of his work on BeyondClouds, SkyProduction, and Instagram.

Correction: We had originally incorrectly reported the airplane model as a Airbus A340.