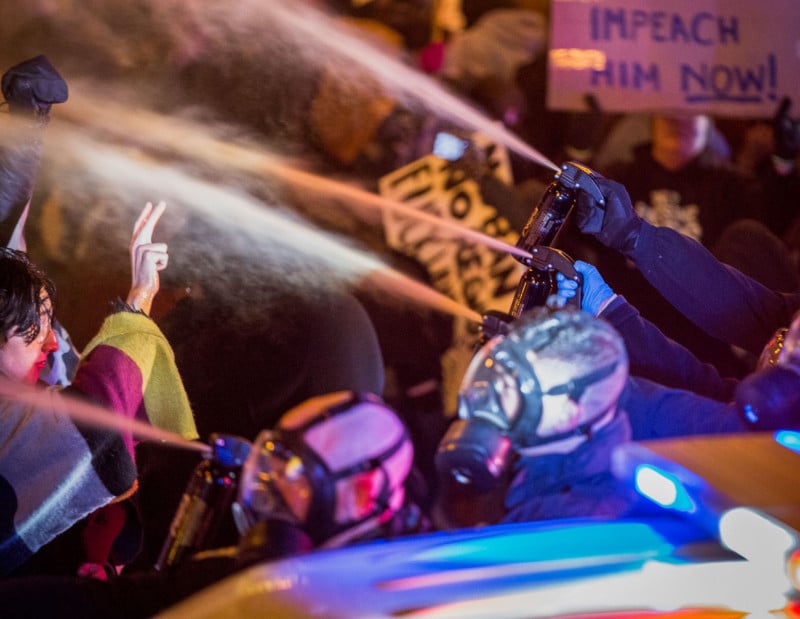 A lot can be said in a single photo. As the old cliché says, “a picture is worth 1,000 words.” Certain famous images have had some impact in shaping the public perception of an event, such as Nick Ut’s “Napalm Girl” photo, which ran in many newspapers and changed how people thought about the Vietnam War.

While a picture can say a lot, it is possible to have a powerful photo that excludes some context. Shooting at 200mm could crop out an important aspect of context from the frame. And because a photo is a moment in time, the viewer misses what happened before and after that given moment. The whole story, before and after, can contribute a lot to the understanding of one photo.

I recently traveled to Washington, D.C. with a few close photojournalist classmates from Ohio University to document President Trump’s inauguration and the women’s march. When we found ourselves in the middle of a riot that weekend, we realized how some people felt about the new administration. Recognizing the importance of this time in history, we stood by, ready to document more protests and news whenever they came up.

Shortly after we got back from D.C., we saw a Facebook event in Columbus, scheduled for about 10 days into Trump’s administration. It was called “Resist Trump • Rally For The 99%: No Ban! No Wall! Stand with Immigrants!” We were excited about photographing another protest and decided to make the trek of just over an hour to Columbus from Ohio University, to document how people are reacting to big change in America.

The gathering started peacefully around 6:30 p.m. on January 30, with about 2,000 demonstrators meeting at the Statehouse to give speeches and rally. After almost an hour, protesters took to the streets to march to the Franklin County Courthouse. Police tried to confine protesters to the sidewalk and one lane.

After gathering at the courthouse, they marched back toward the Statehouse and decided to sit in the middle of the street. The protest ended around the time the above pepper spray photo was taken.

When I shared this photo on Instagram and Facebook, I relayed the facts of the situation, as a journalist or photojournalist does. I didn’t express my feelings about the image, but stated that Connor Lefevers had been holding the peace sign up for about half an hour and that the police had waited out the situation for about 40 minutes before resorting to pepper spray. This photo was taken at 9:03 p.m.

Friends on Facebook commented that it was a powerful photo, or re-shared with words like “heartbreaking” or sad face reactions. It’s a pretty extreme situation to witness without any background knowledge of what was happening. It’s easily interpreted as the police needlessly reacting to a peaceful protester, let’s back up and examine the context.

I was shooting with two Canon bodies with times that differed by 20 or 30 seconds, if that. Here are the photos leading up to that moment. 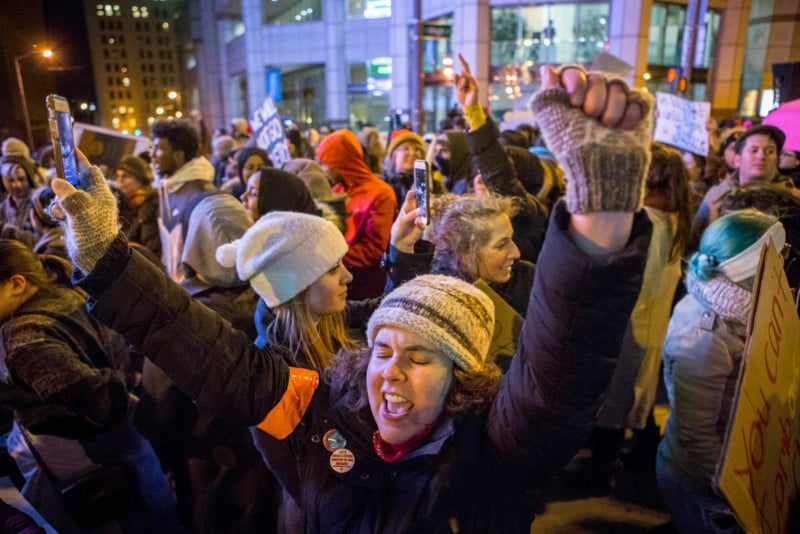 8:15 p.m. – Protesters begin to stand and sit in the middle of the intersection of South High and State streets near the Columbus Statehouse. 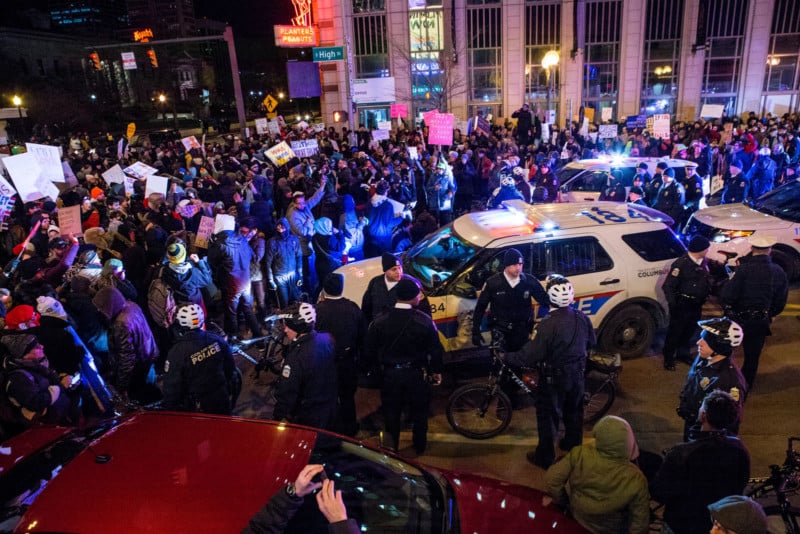 8:18 p.m. – Bicycle patrol and other officers with cruisers gather near the protesters. They are just standing there, essentially. 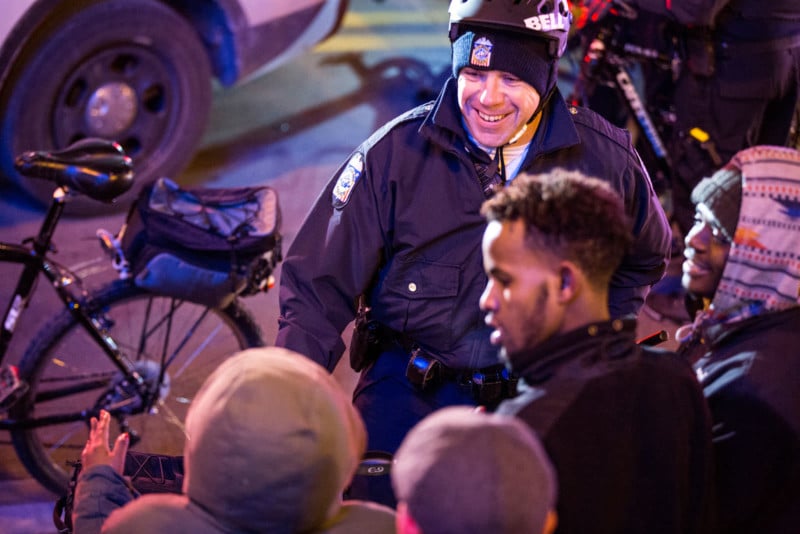 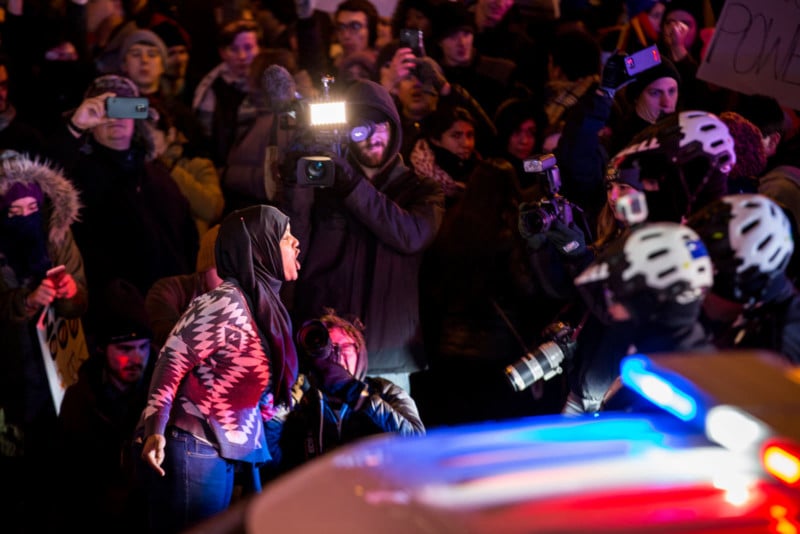 8:24 p.m. – A protester yells at police, who stand relatively silently and talk among themselves occasionally. Police are not reacting to protesters.

Soon after, Lauren motions to me not to come down from my high vantage point on a newsstand type box, as police are readying their pepper spray and beginning to warn protesters multiple times that “chemical agents will be used” if they do not leave. 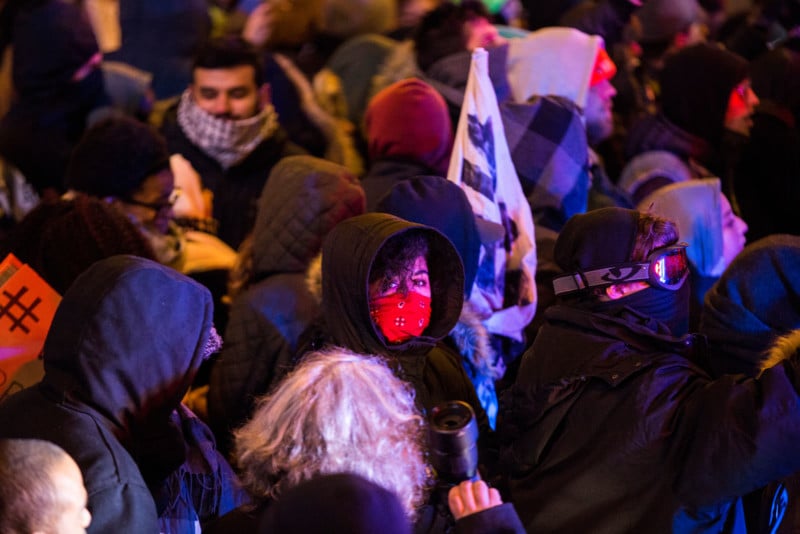 8:37 p.m. – Police supervisors are present, discussing with each other what to do. After many warnings to clear the area, protesters continue to chant, sing and raise peace signs, middle fingers or fists.

Demonstrators begin to cover their mouths. Many are live streaming on Facebook or recording video. Officers begin to put on their gas masks at 8:45 p.m., according to the timestamps on my photos. Warnings continue from police. 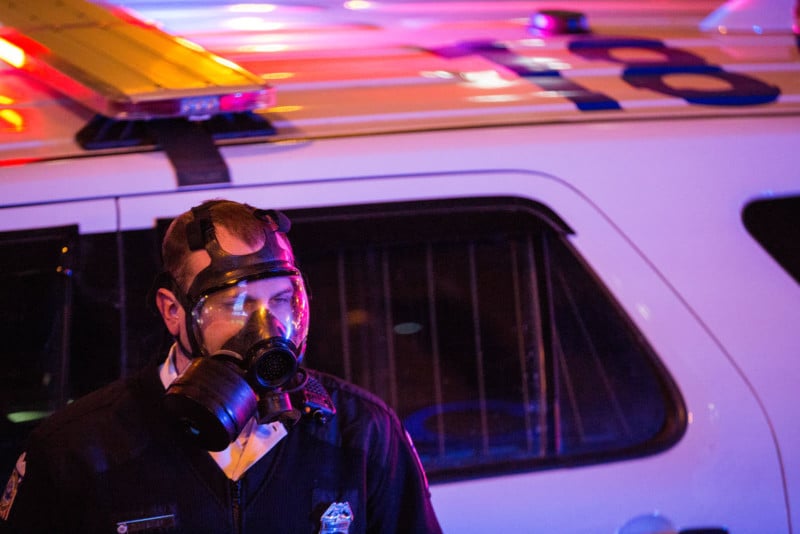 9:02 p.m. – I don’t have many pictures of protesters in between, as there wasn’t much “happening” other than police and protesters standing on their respective sides of the line.

Some protesters are attempting to confront police. Others sing and stand together. Police are still waiting, over 15 minutes after putting on their gas masks, not really speaking with or interacting with protesters in any major capacity (other than giving continue warnings to clear the area over loudspeaker).

9:03 p.m. – Police unleash the pepper spray. Lauren told me that the order she heard was to “spray in two meter spurts above the crowd.” It seemed like a tactic to break up the crowd and clear the street rather than actually injure any protester at point blank range. 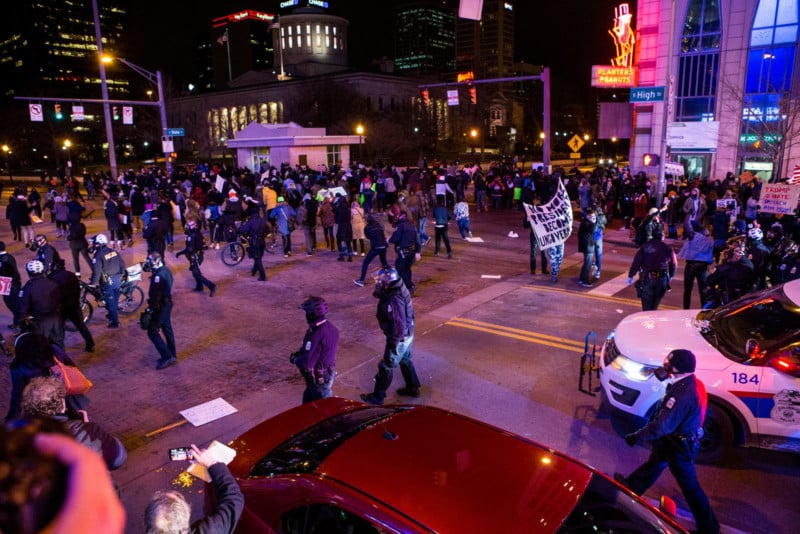 9:04 p.m. – Police continue to clear the streets and remain until protesters are back onto the sidewalks. 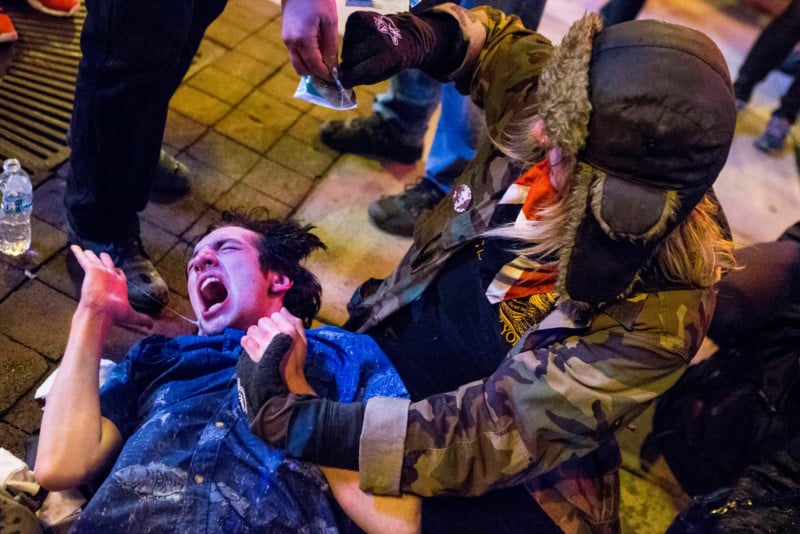 9:10 p.m. – “Medics” for the protesters help the peace sign guy, Connor Lefevers, who is obviously in pain. Actual medics, EMTs, are on the scene within about five minutes to assist victims of pepper spray. Everyone else disperses over time.

It’s not my job to say if the police or the protesters were in the right or wrong. People could argue all day and take sides. It is my job to convey the most accurate information that I can. After people reacted to this photo, I realized that it’s important to know what led up to that moment and that police did not immediately begin spraying protesters. It took them a long time to actually make that call.

While blocking traffic is unlawful, technically, it’s also important to note that protesters never got “violent” in the sense that they did not throw things or physically confront the police. When viewing the image of Connor with his peace sign raised while being pepper sprayed, it’s easy to paint the police as uncaring monsters and take sides. But when one understands more sides than one and the context, it promotes mutual understanding.

This might be speculation, but I don’t think that the police went out that night with the aim of pepper spraying citizens voicing their opinion. Protesters, I would guess, did not mean to inconvenience motorists or break the law, but wanted to make a demonstration and make their voices heard. Nobody is ever fully right or wrong, but the more people work together to understand each other, the more we can heal the division in our society.

About the author: Patrick Connolly is a third year photojournalism student at Ohio University. The opinions expressed in this article are solely those of the author. He is the senior multimedia producer with OU’s student newspaper, The Post. His work can be found on his website and Instagram. This article was also published here.