When an action camera maker says their cameras are “freeze-proof” they definitely do not mean you should drop them into liquid nitrogen and let them freeze solid… but that’s exactly what YouTuber Grant Thompson did with a new Hero5 Session and Hero5 Black.

Thompson started with his old GoPro Session to see if there was any way an action cam could survive an extended bath in liquid nitrogen. Then, after realizing that a few seconds wasn’t going to stop the GoPros or even really slow them down, he popped out his brand new Hero5 Session and Black cameras and dropped those in.

Each was left in the liquid nitrogen bath until they were frozen solid—so cold, in fact, that he couldn’t touch them for fear of frostbite—and then allowed to thaw back to room temperature to see if they still worked. This is what they looked like when they came out of their bath and the moisture in the air began condensing into frost on the surface of the cameras: 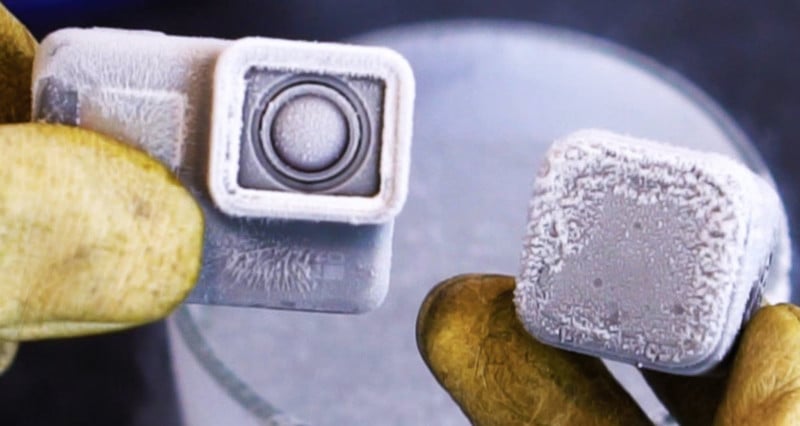 Incredibly, both cameras survived to shoot another day! The Hero5 Session in particular kept on recording for quite some time while it was freezing, far out-pacing the Hero5 Black, which shut down a few seconds after being completely submerged.

Each had pieces that popped off or unstuck—parts that were held on only by adhesive that couldn’t stand the cold—but after being given 24 hours to thaw they were both able to record new footage despite having lost all of the previous day’s work.

Check out the video up top to see this experiment for yourself. This is about as far from “optimal operating conditions” as you can get; give a floundering GoPro credit for creating some really tough cameras.