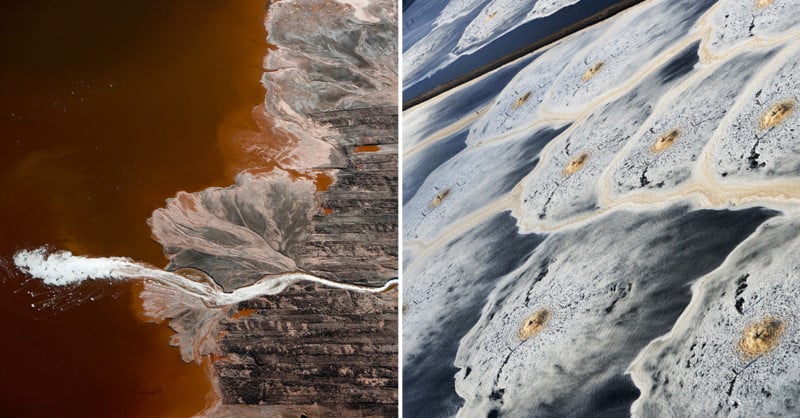 There’s an environmental cost behind every facial tissue, electronic gadget, and pork chop you purchase—a cost that might horrify you if you could actually see it. Thanks to the powerful work of photographer and environmentalist J Henry Fair, now you can.

His project and now photo book Industrial Scars: The Hidden Costs of Consumption documents some of the most horrific environmental atrocities humans have created in the name of consumerism—from oil spills, to pulp waste, to lakes worth of hog fecal waste. At first blush, his photos are stunning, beautiful even, until you read the captions.

“Industrial Scars is a project that exploits the irony of making beautiful images from toxic waste to communicate a message about the damage wreacked on our planetary life support systems by the disposable consumer society,” writes Fair in his artist statement. “The objective of this series is to promote dialog, and prompt viewers to consider the consequences of their purchase decisions.”

One look at these images… and you won’t soon forget that cost: 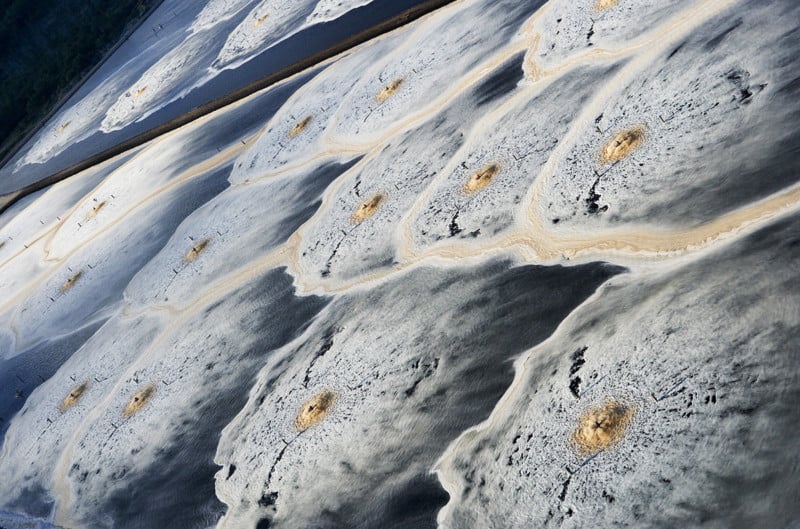 Caption: Pulp Waste from the Manufacture of Facial Tissues – At this factory, the pulp for the most popular facial tissue is produced. The wood fiber is obtained from the Kenogami National Forest in Ontario, Canada, where the government subsidizes the cutting of this old growth forest for the few jobs that it provides, though in fact the cutting of a forest is so machine intensive that three men can cut it down alone.

The forest, once home for a multitude of species from wolves and bears to the moss on the forest floor, is an immensely diverse and complex ecosystem and habitat, and will be replaced by a monoculture of factory farmed trees which will be cut again.

This aeration pond is part of the effluent treatment system. The primary task of the treatment is to remove organics (wood fiber) from the water before it is returned to its source (typically a river.) These ponds are filled with a mixture of microorganisms that breakdown the organic material. The aeration is to break up particles in the effluent and to provide oxygen to the microbes. 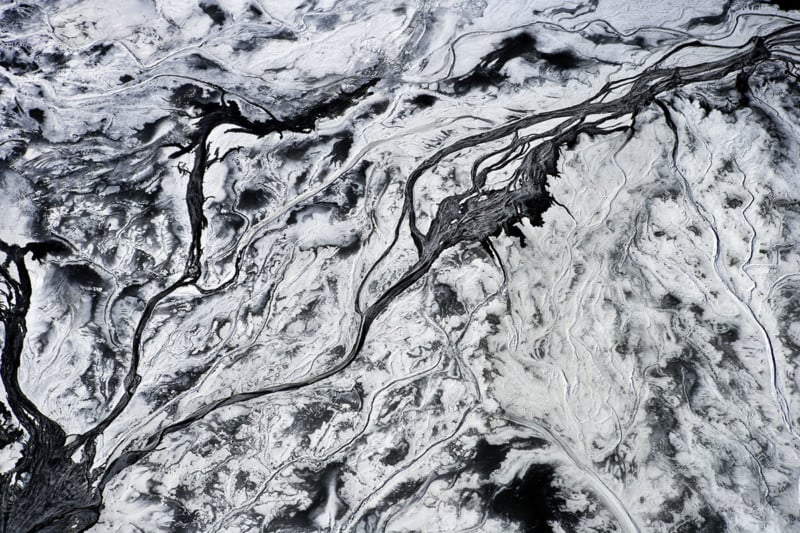 Caption: Heavy Metal Waste From Fertilizer Production – This is one of the top 10% most polluting factories in the USA. It is known to be a major emitter of lead, but the fertilizer industry in particular has been effective in pressuring the EPA to reduce the reporting requirements to which it is subject, making the clear picture of its emissions difficult. 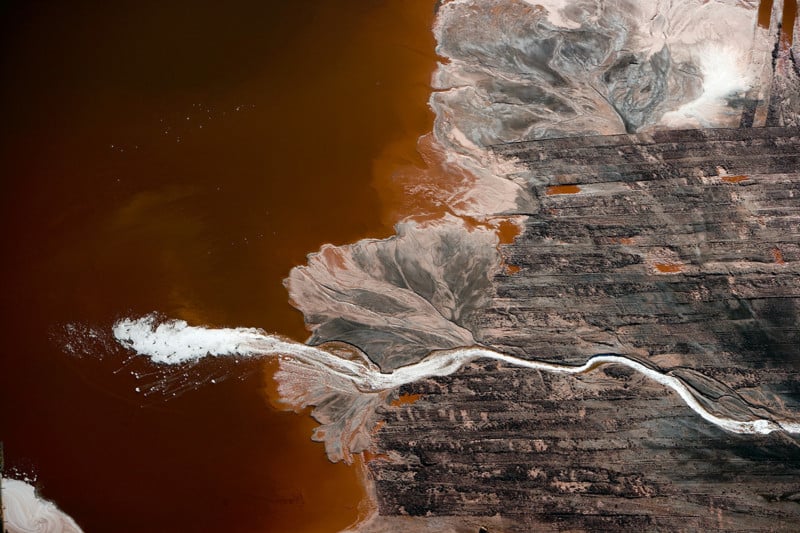 Caption: Plume of Foam in Bauxite Waste from Aluminum Refinery – Producing aluminum metal involves refining bauxite (the ore), using caustic chemicals and tremendous amounts of electricity to produce alumina, as well as the electrolytic reduction of alumina to produce aluminum.

This depicts the disposal of the byproducts, in which the solids (mostly impurities in the bauxite) are separated from the liquids. During primary aluminum production, PFCs (CF4 and C2F6) are emitted as byproducts of the smelting process, both significant greenhouse gases. 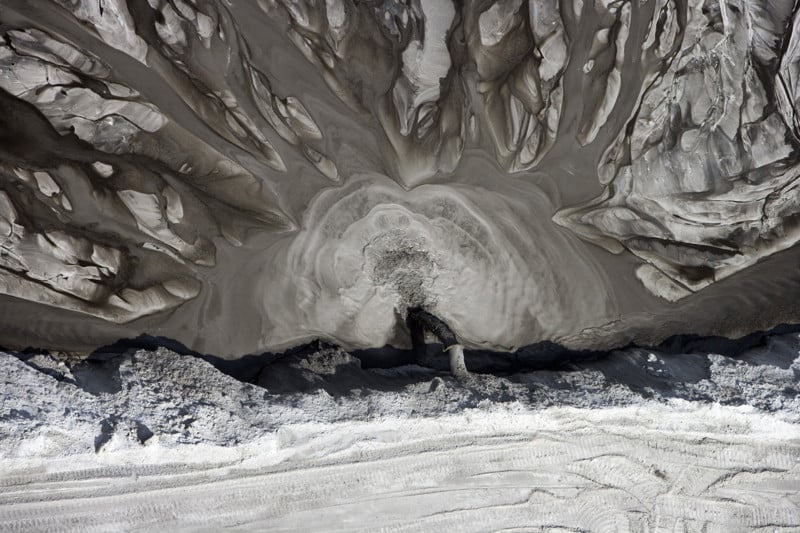 Caption: Outlet Pipe from Phosphate Waste Impoundment – This outlet pipe is at the bottom of a giant waste impoundment in Florida, and forms a stream that eventually joins the water table. 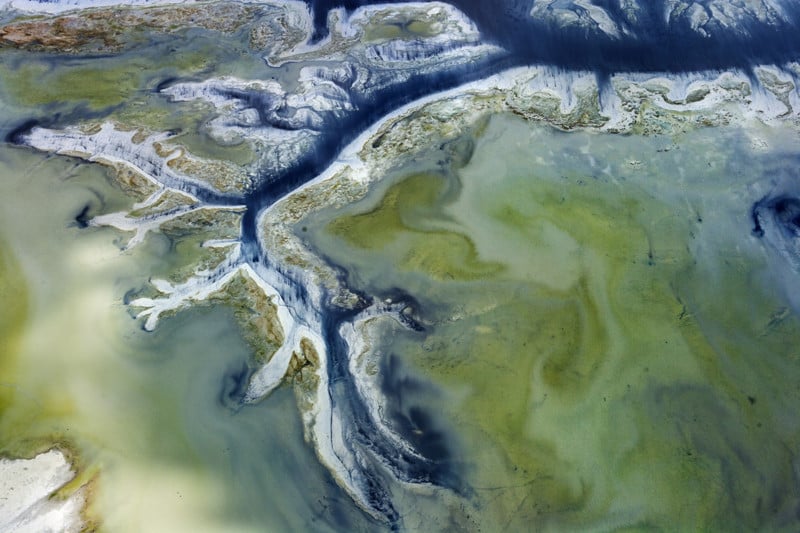 Caption: Waste Pond at Phosphate Fertilizer Mining Site – All plants need the three macro-nutrients, nitrogen, phosphorous, and potassium. After several generations of agriculture, these minerals are depleted from the soil and must be replaced for continued crop productivity. 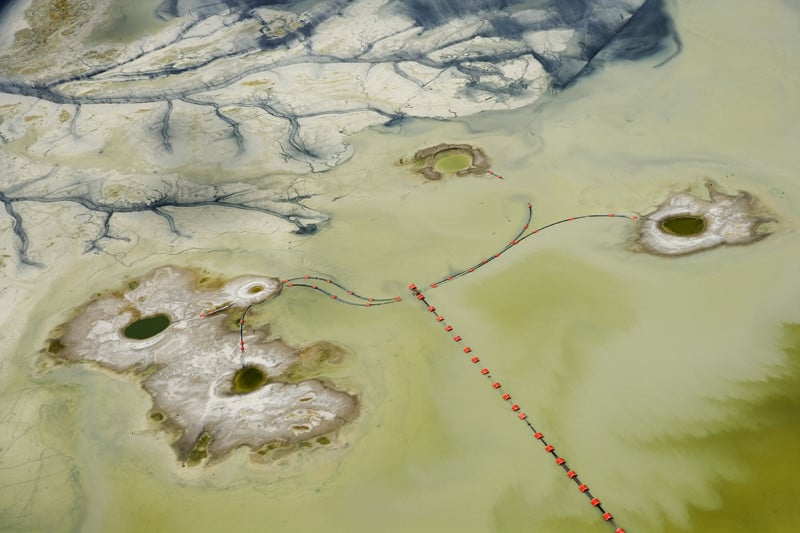 Caption: Test Discharge of Phosphate Mining Byproducts – Because phosphorous is a highly reactive nonmetal, it is never found as a free element and is generally extracted from phosphate rock which is usually found in estuarial areas. The largest USA reserves are found in Florida.

After extraction, phosphate is washed with large amounts of water. The waste products (clay and sand) are consolidated and pumped out to containment impoundments where the liquids and solids are separated. The red barrels are floats to suspend the hose on top of the liquid.

Fertilizer tends to be over-applied in agricultural situations, and thus runs down with the rains through wetlands, streams, and rivers to the sea. Since it tends to be the limiting factor in many ecocycles, the introduction of a large additional supply stimulates the bloom of the first and fastest growing of the extant organisms. In aquatic environments, this results in algae blooms which absorb all of the available oxygen thus killing the marine fauna (fish). 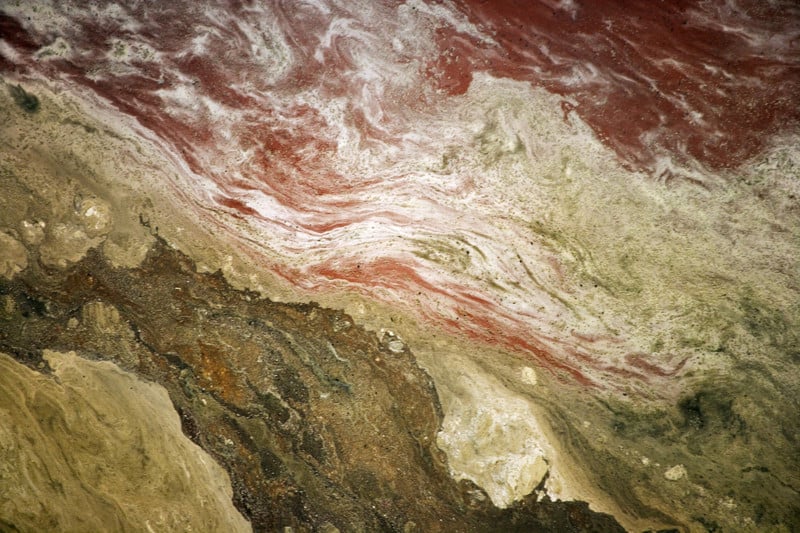 Caption: Hog Fecal Waste Lagoon – Hogs are kept in sheds with grated floors which allow everything to pass down to the pipes that drain to large waste lagoons. All manner of offal collects in these impoundments, from fetuses to fecal matter.

Due to the drugs and hormones fed the sows (females), their feces are pink. Once this aggregate is together in a lagoon, the wind will tend to accumulate the floating solids in one place. 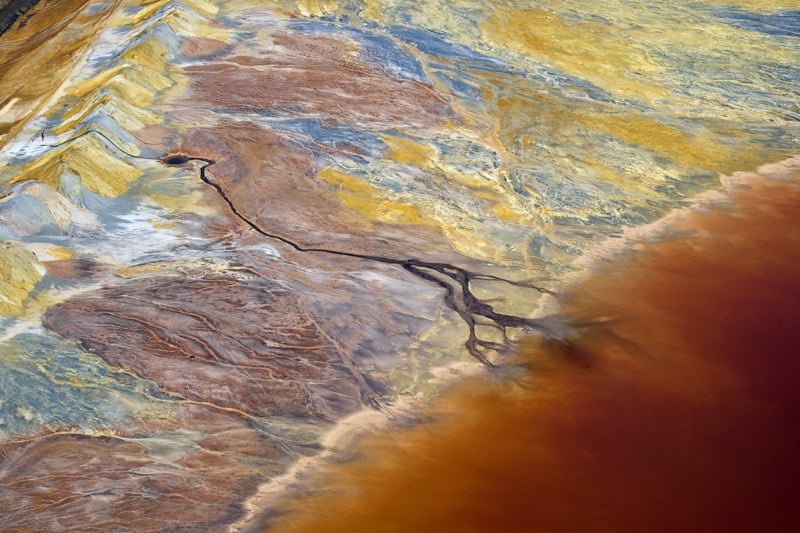 Caption: Waste Impoundment At Copper Mine – Rio Tinto, literally red river, is one of the oldest and most productive mines in the world, having produced a wealth of different metals over centuries, and the home of the international mining company bearing the same name. It is rumored to have been “King Solomon’s mine, and the reason the Moors invaded Spain. 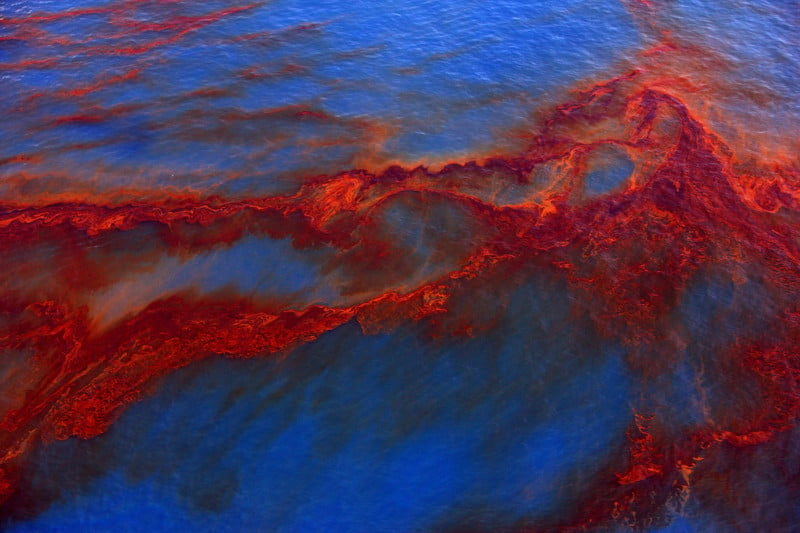 Caption: Oil from Deepwater Horizon spill on The Gulf Of Mexico – Oil comes out of the ground in many colors and consistencies from invisible gas to solid tarry globs. These will evaporate, float on the surface, or below, depending on their density relative to the salt water. The color of the oil observed at this spill varied from red to dark brown. 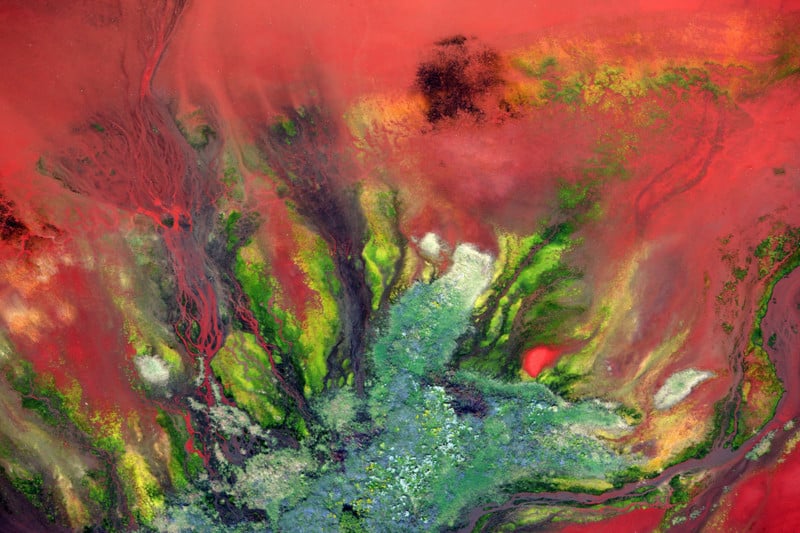 Caption: Heavy Metal Waste From Fertilizer Production – The tremendous volume of waste produced has a very high ph, and often contains significant amounts of heavy metal contamination, is usually stored in large impoundments near the refinery where it can dry and be spread as dust by the wind. 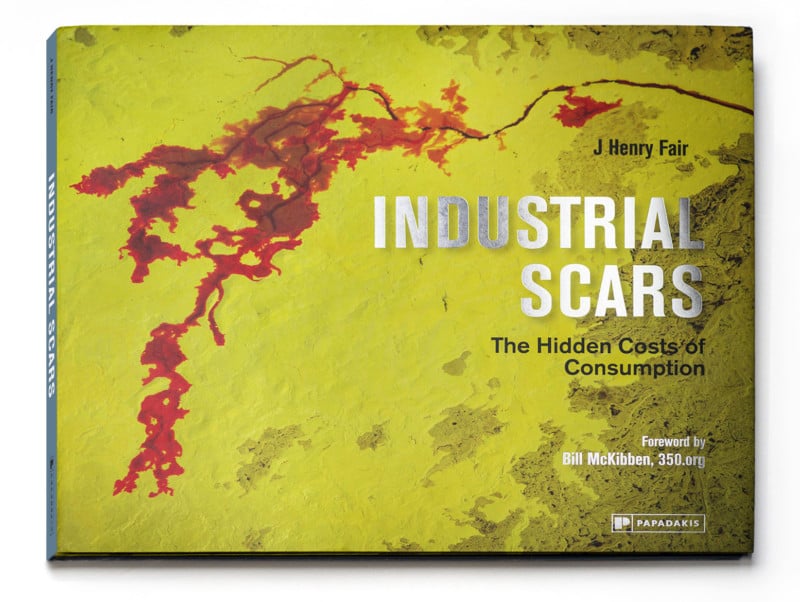 You’ll be hard pressed to find a more striking 204-page coffee table book. To learn more about Industrial Scars or purchase a copy for yourself, head over to Fair’s website by clicking here. And if you want to see more of the images found inside, you can check out more examples here.

Image credits: All photos by J Henry Fair and used with permission.

Quick Tip: This is Why You Can Move Adjustment Brush Edits in Lightroom