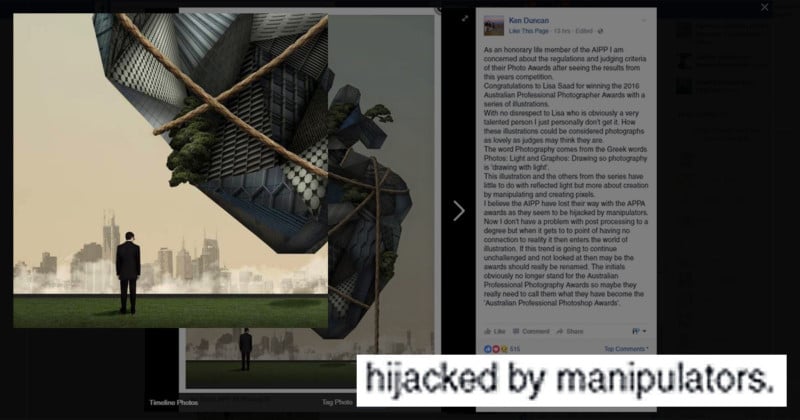 The winners of the 2016 Australian Professional Photography Awards were announced last week, and one of Australia’s top photographers isn’t happy with the selections. He says the prestigious awards have been “hijacked by manipulators” whose work should be considered illustrations rather than photographs.

“Every image has been photographed, so all the little elements I’ve gone out and photographed, and then I’ve combined them into Photoshop and so they look probably more like photo illustrations,” Saad tells ABC.

In addition to Saad’s work, a number of other winning photos by other photographers were also heavily edited photo illustrations.

The selection of these photo illustrations has prompted photographer Ken Duncan, widely regarded as one of Australia’s top landscape photographers, to publicly speak out against the contest on his Facebook page.

“As an honorary life member of the AIPP I am concerned about the regulations and judging criteria of their Photo Awards after seeing the results from this years competition,” Duncan writes. “With no disrespect to Lisa who is obviously a very talented person I just personally don’t get it. How these illustrations could be considered photographs as lovely as judges may think they are.”

Duncan says the word “photography” is from the Greek words “photos” and “graphos,” which mean “light” and “drawing,” respectively. Photography is therefore “drawing with light,” he says.

“This illustration and the others from the series have little to do with reflected light but more about creation by manipulating and creating pixels,” Duncan says. “I believe the AIPP have lost their way with the APPA awards as they seem to be hijacked by manipulators.”

Duncan says he doesn’t have an issue with post-processing, but believes that once an image loses connection to reality it belongs in the world of illustration rather than photography.

Update on 9/8/16: Here’s an official statement provided to PetaPixel by photographer Rocco Ancora, the Awards Chair of the Australian Professional Photography Awards:

As the awards chair, I would like to respond to the discussion points raised in the article.

The AIPP are aware of the pro and cons of both sides of the argument raised in this piece, which have been discussed many times over many years.

It is important to point out that the AIPP awards have 18 different categories – each with their own set of rules – with each representing the various genres of work that professional photographers are engaged in on a daily basis.

Some of those genres allow for significant manipulation and post processing, and others – don’t.

The images entered by Lisa Saad, represent the work that Lisa, as well as many other advertising photographers around the world, do on a daily basis. Post production is a big component of this genre.

In selecting the Australian Professional Photographer of the Year, the eleven-person judging panel use criteria which include: innovation, content, creativity, technical excellence and impact of the overall submission.

In looking at the 18 category winners – over several hours – the judges compared and debated all categories and decided that Lisa’s portfolio best met the criteria. At this final stage of the competition, whether post production was used or to what extent, has little relevance.

It is important to note that over the past few years, overall winners came from various categories, including those where the rules prohibit extensive post production manipulation. These include the Sports, Landscape and Wedding categories.

As a side note, last year’s winner, John Ansell, won the title of the Australian Professional Photographer of the Year with four “tin types”, where digital technology wasn’t used at all.

Rather than regurgitating past arguments, let’s celebrate Lisa’s win and recognise that photography is constantly evolving and professionals have to evolve with it, and the AIPP are at the forefront of recognising and rewarding excellence in image making as a whole.