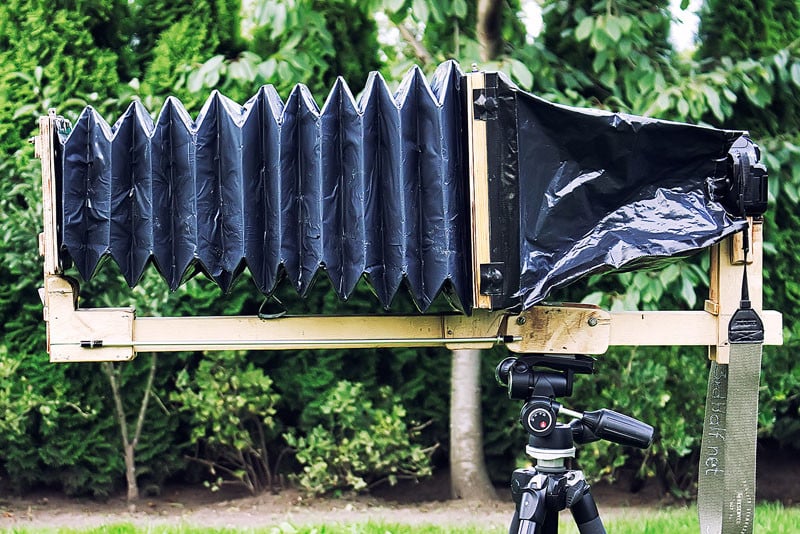 I recently built my own DIY large format camera using scraps. The idea of this camera started with vintage profile spotlight that I wanted to restore, only to discover that some of the internal lens elements were shattered. The only lens element that was undamaged was the front element. Upon closer inspection, I discovered that this element can project an image circle big enough to cover an 8×10 area.

So, the obvious use for it was to create large format camera.

But I didn’t want to bother with large format film and the other hassles of creating a proper large format camera just for this weekend experiment. so I decided to create something like a camera obscura and photograph the projected images with my DSLR.

Here was the basic idea of the camera: 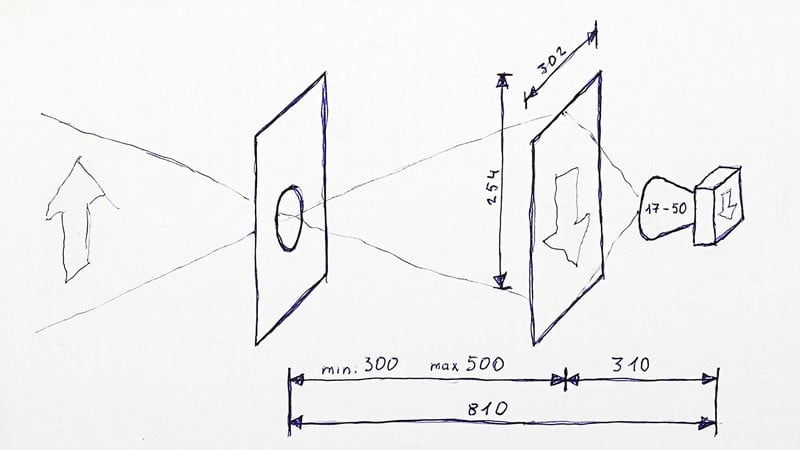 As you see, the design is similar to any other large format camera, except this has DSLR added to it to photograph projection on ground glass.

Fast forward two weekends, and here is the finished camera: 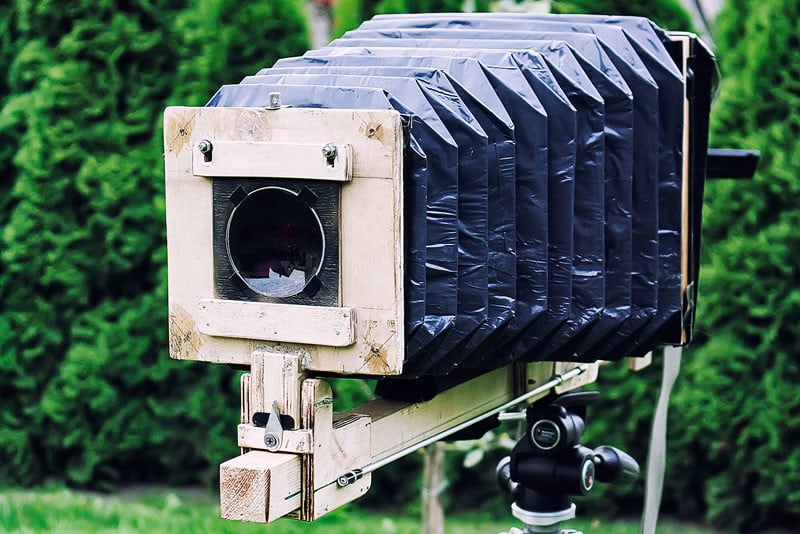 Because I didn’t want to invest much (or anything) in this project, the camera was created from scraps and other trash I found lying around my garage.

The lens was mounted to a piece of plywood, so I can flip it around — the lens slightly changes its look depending on which direction it is flipped. After some testing, I found out that the focal length of this lens is roughly 450mm, which is equivalent to about 60mm in 35mm format. 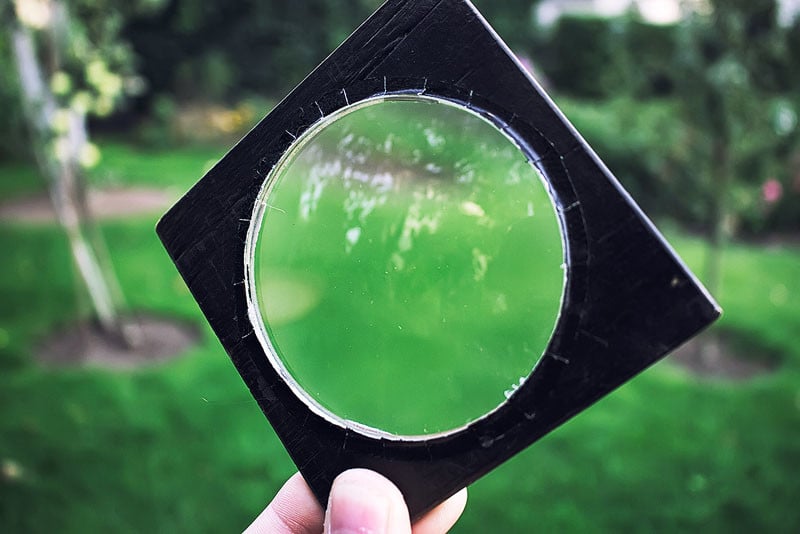 The bellows were created from office paper and black trash bags. Making folding bellows was the hardest part of this project. For more information on this, I suggest visiting jbhphoto, where you will find a .pdf file with the most comprehensive information about making bellows on the interwebs.

The ground glass was made from 2.5mm plexiglass that I wet sanded with 800-grit sandpaper. At first I tried 1500-grit sandpaper, but I found out that it was too fine and didn’t scatter light enough to project a clear image.

The lens I chose for this project was the Tamron 17-50mm f/2.8 VC shooting at 17mm. This allowed me to fill the frame with ground glass roughly 310mm from the camera’s image plane. 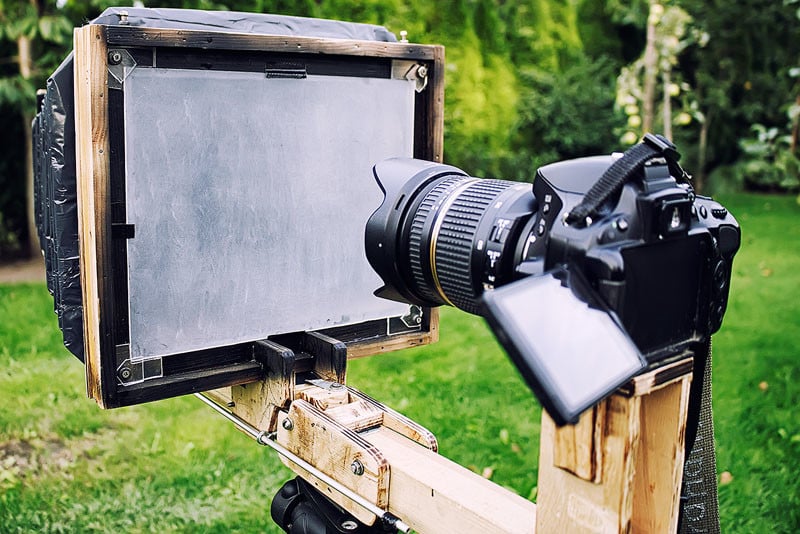 For focusing I made a rod system so that I can focus the lens from back of the camera while looking through the live view. 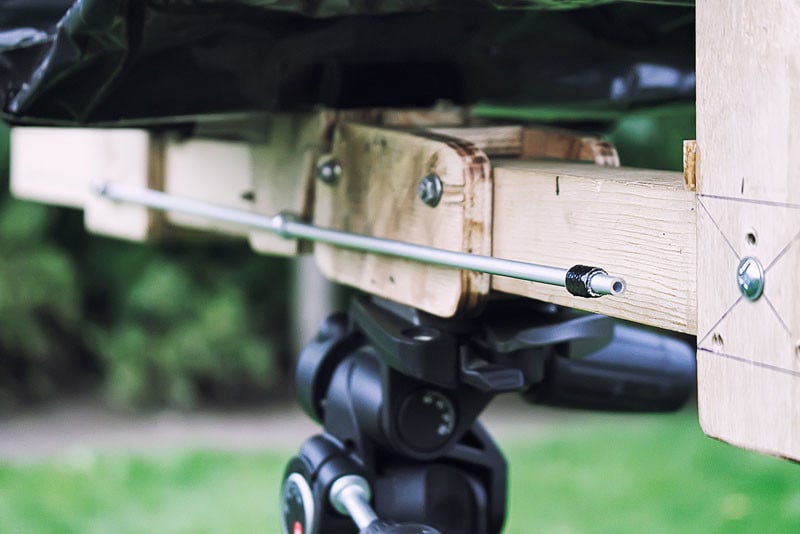 To make this contraption usable on location, I tried to make it foldable and somewhat convenient to travel with. Well… as convenient as an almost-meter-long camera can be. 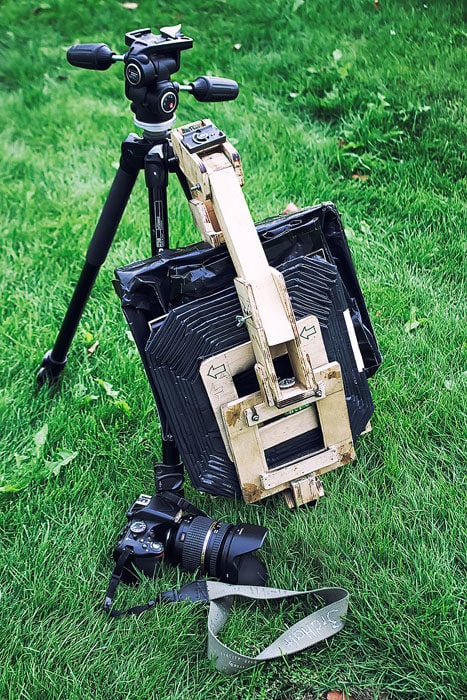 Now, let’s get to the important part of this project – the photos!

The operation of this contraption is straightforward. At first I focused DSLR on ground glass and locked the focus. Then I used Live View to frame and focus the large camera.

Because my tripod head was barely stable enough to hold this contraption – I had to use self timer to avoid camera shake. Also, shooting in the wind with this thing was major pain in the rear.

Editing raw files was rather straightforward. After removing rather heavy vignetting – photo was edited like any other photograph. 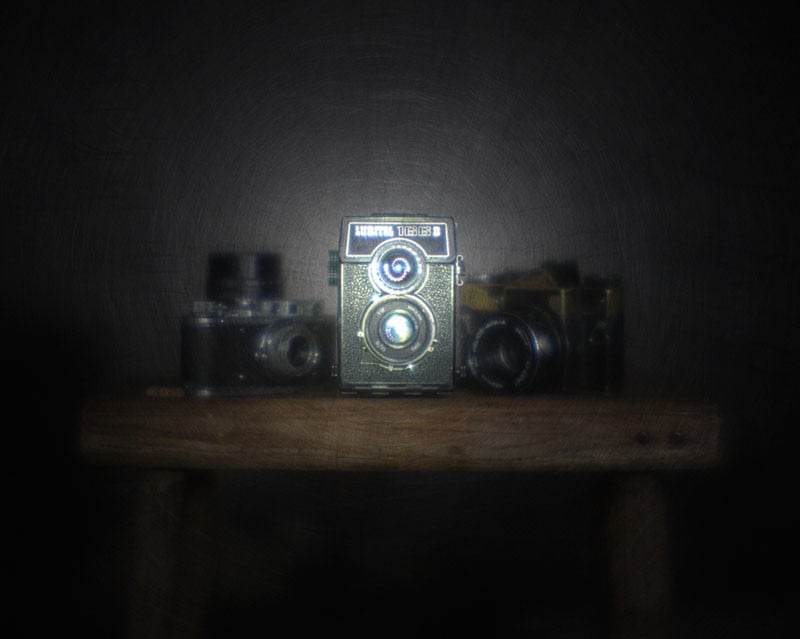 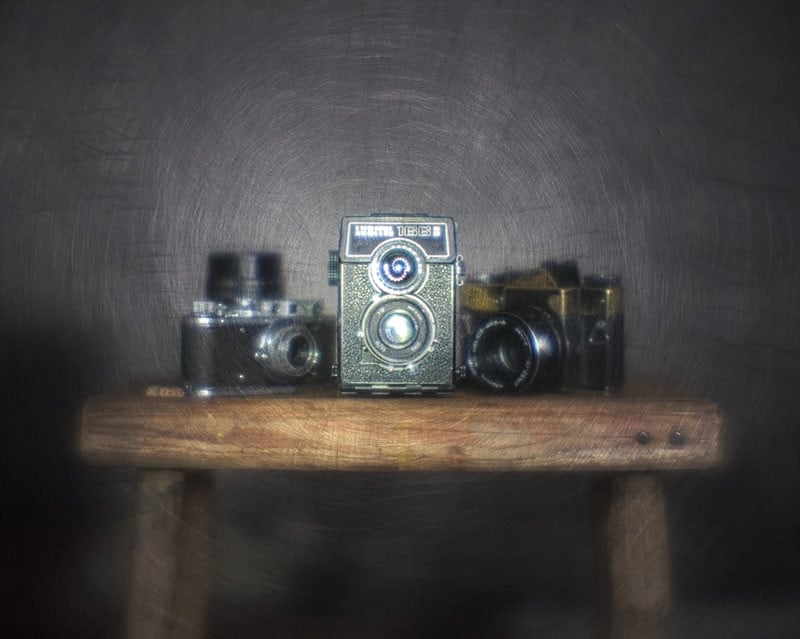 This was a very spontaneous project, so I didn’t do much planning. At first I thought that this will be a “make it and throw it out” kind of project, but after playing around with this camera I think that this should be a “thing”. I know that there are quite a few photographers with field cameras lying around who would like to take them out for a spin once in a while, but who don’t what to bother with the processing and the cost of large format film. This should remove some of these problems. Sure, this won’t satisfy everyone, but this is better than collecting dust.

Here are some tips for photographers who want to try something similar:

Tripod: You should use sturdy tripod with a big quick release plate for camera this big. Also, ball heads are not very convenient for operating a camera of this size.

Ground glass: I suggest to make proper ground glass, by grinding glass with Silicon Carbide powder or chemical etching. This should avoid most of the sanding scratches. And a Fresnel lens in front of focusing screen should remove vignetting.

That’s pretty much it! Good luck.

About the author: Gvido Murnieks is a photographer based in Valmiera, Latvia. You can find more of his work and writing on his Flickr and website. This article was also published here.

I Shoot Photos of Giant Things Without Relying on Photoshop