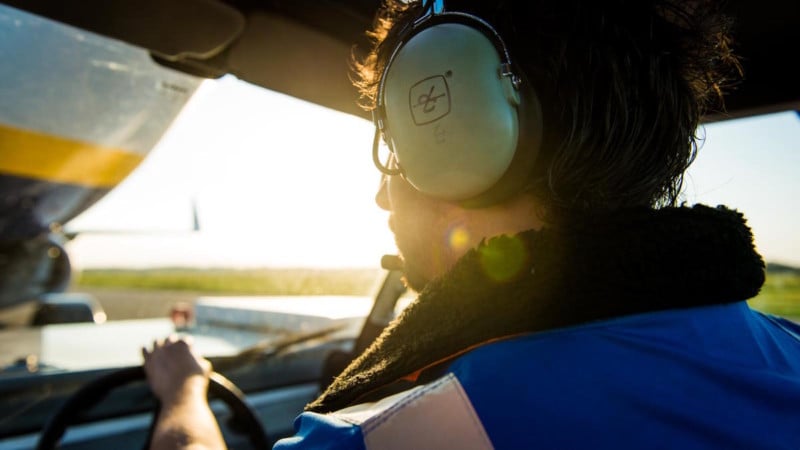 When I was a little boy my mother taught me the first and most important rule of photography: always keep your back turned to the sun. It’s a funny thing I’d grow up to develop a romantic relationship with backlight. These are the confessions of a backlight lover, and how you can start your own amorous episode with it.

The epicness of backlight

As an active lifestyle photographer I focus on capturing photos of athletes, making them look their very best. I like to elevate my images to be something special, adding a credible layer of heroism and epicness. Using light plays a major role in this. It’s only recently that I’ve come to realize why using backlight in my photos works so well, and why in general backlight makes the person seem like a bit of a hero. 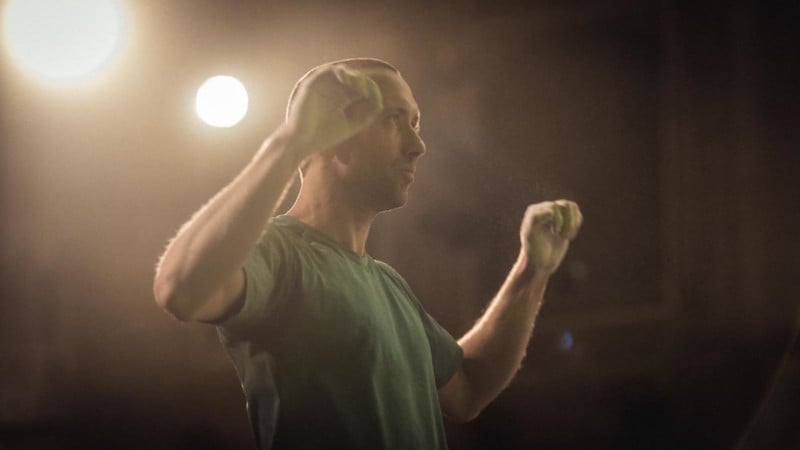 I think it must have something to do with the way stages are generally lit. During concerts or important speeches, the stage is often lit from a number of different sides, in most cases creating a situation where some backlighting exists.

So basically when we photograph a subject that has some backlight hitting them, we subconsciously associate that with the person being important or famous. That’s just my theory though. One other aspect is that when shooting with backlight, a flare is often created. This is generally associated with warmth, a sunny feel, or a cinematic quality (JJ Abrams anyone?). 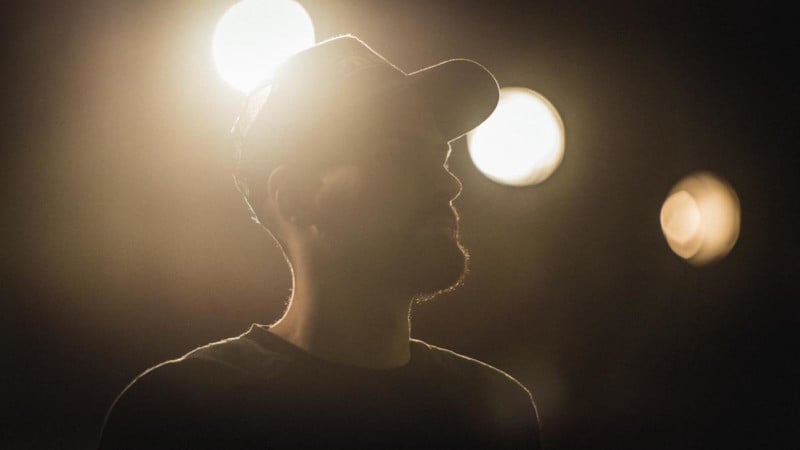 What’s backlight to begin with?

So back to square one: what is backlight exactly? Obviously it’s light hitting your subject from behind, but there’s a bit more to it than that.

For the sake of this explanation, let’s assume you’re shooting a portrait. In its most extreme form, you’d only have the backlight hitting your subject, thus obtaining a dark face and a halo around your subject’s contours. This is a trick that works in some cases but for my own purposes is generally too abstract, I want to show some of the person’s identity. This means you’ll need to have some fill light on the front side of your subject.

Also, please note that it’s a thin line between backlight and what is generally referred to as hairlight. In a backlit situation, the majority of the light is coming from the back, while a hairlight is just a secondary light in addition to the key light hitting the subject from the front.

The portrait below features a hairlight but I wouldn’t call it backlit. On the other hand, the photo above probably could have done with a bit more fill light, it’s only a small step removed from being a total silhouette. 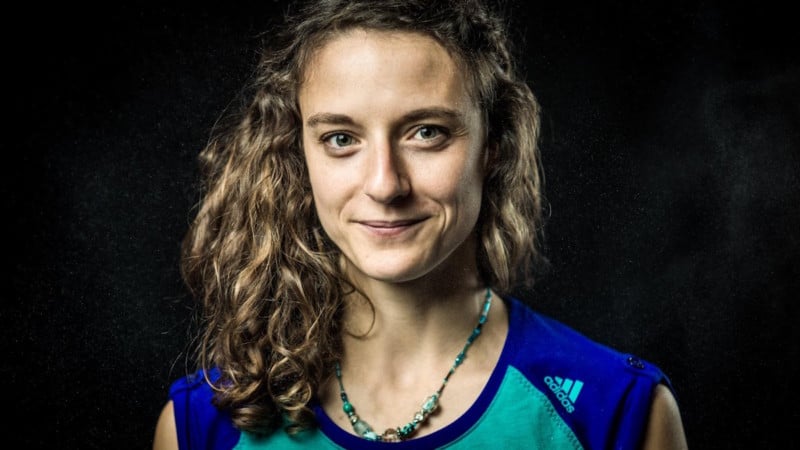 Starting your own romance with backlight

So as noted above, to create a backlit situation all we need is some backlight and some fill light from the front.

There just so happens to be this excellent light source that’s available at least 10 hours each and every day, depending on your geographic location. Whether the sun is shining bright or a thick layer of clouds is between it and ourselves, there’s always a way we can use it. I love it when the sun is sitting low in the sky and the entire world takes on a bit of yellow and orange feel. 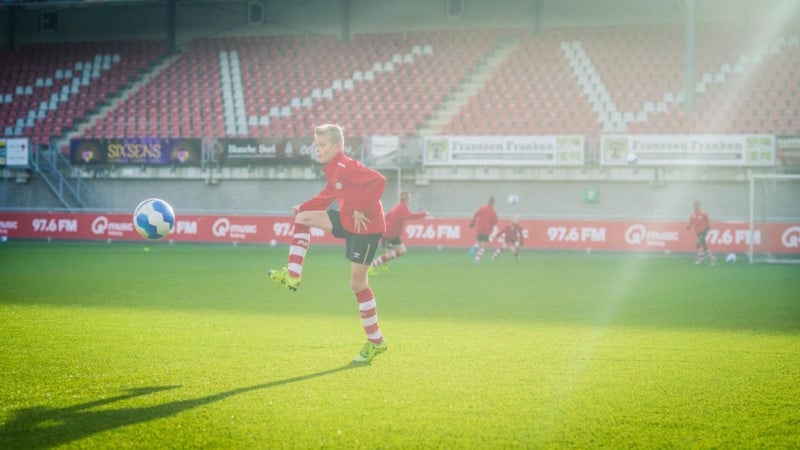 In golden hour, quite a fair amount of photographers opt to shoot with the sun in their back, but just turning around 180 degrees allows you to obtain far more depth and tension in your photos. In general, when shooting outdoors with ambient light, your subject will have enough fill light bouncing off of objects in your surroundings. If need be, you could just set up in front of some white wall, or alternatively bring up the shadows in post-processing.

In the photo below, the sun was actually quite low in the sky just out of frame in the upper left corner of the image. However, because the parking deck was bright gray, it bounced back an incredible amount of light onto my subject. One other form of backlight I’ve been experimenting with is placing my subject in a doorframe or in front of a window and just shooting right into the ambient light coming into the room. Especially if the sun isn’t directly hitting the room, the quality of light is amazingly soft.

Basically what you get is a huge softbox. If you experiment with the angle a bit you can get a quality of light that resembles some of my personal hero Joey L’s light. 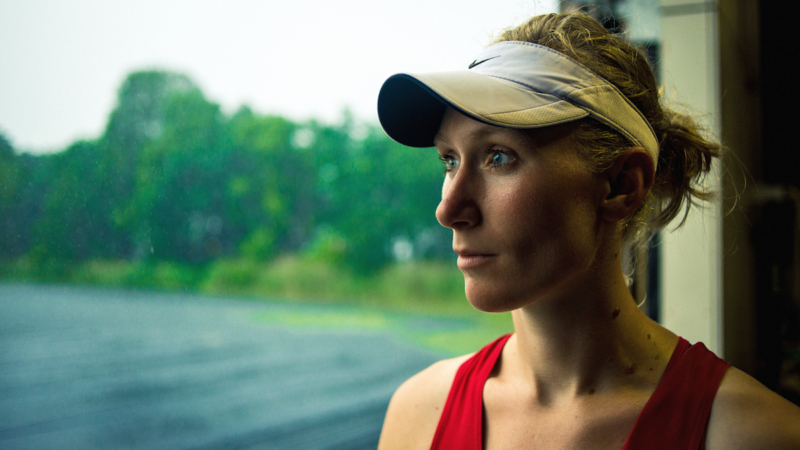 If you’re shooting indoors, just look for the light sources. I simply love it when spotlights are installed during sports competitions.

Most photographers will choose their position based on where they expect the peak of the action to happen, myself I first look at the light and choose my position based on that. I’m looking to make the athletes look like downright heroes and spots are an incredible help in that. 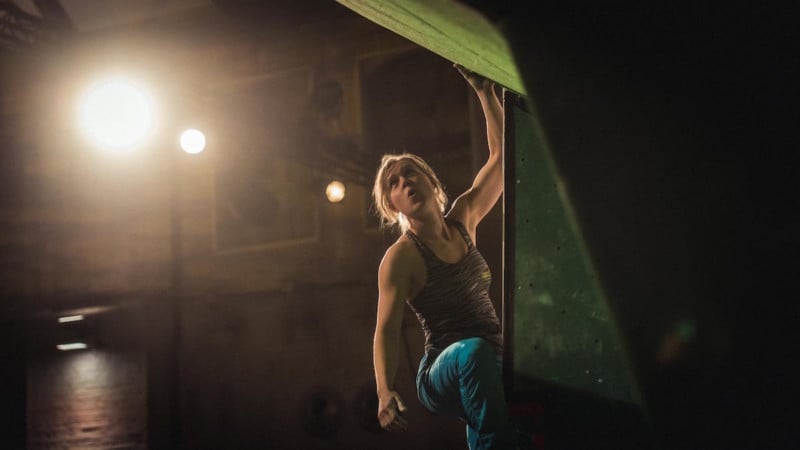 Because the light will be more directional in this case, you do run the risk of underexposed subjects. Try to look for objects that could help fill in the front of your subjects. In my climbing photography this is generally no problem at all: the wall sections are often painted white, making for an absurdly perfect reflector. 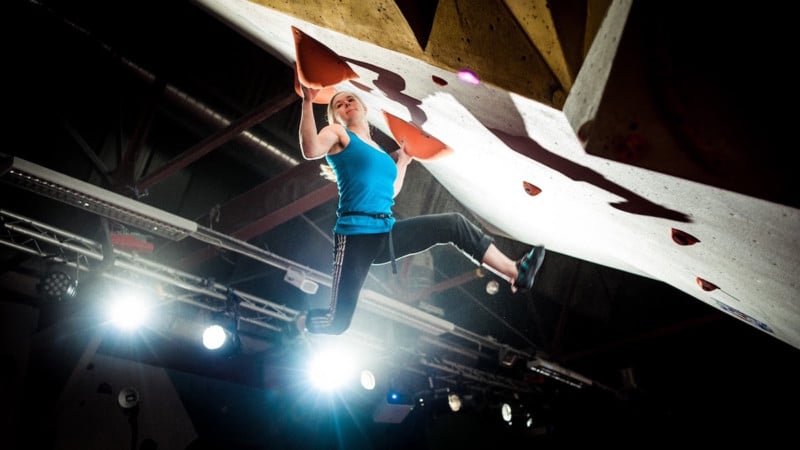 If what you’re looking for is total freedom, then using your own light will be an interesting option. Using strobes can be a huge help in realizing your vision. Personally, I use an Elinchrom ELB-400 unit with an HS head. What’s great about this setup is that even outdoors I can use fast shutter speeds and shoot with wide open apertures, thus giving me total freedom.

With normal speedlights, shooting outdoors and overpowering the sun may be a bit of a problem. Indoors you should be good though. The images below of two BJJ fighters were shot with an octabox placed just out of frame to the left, hitting them from about 45 degrees from the back. 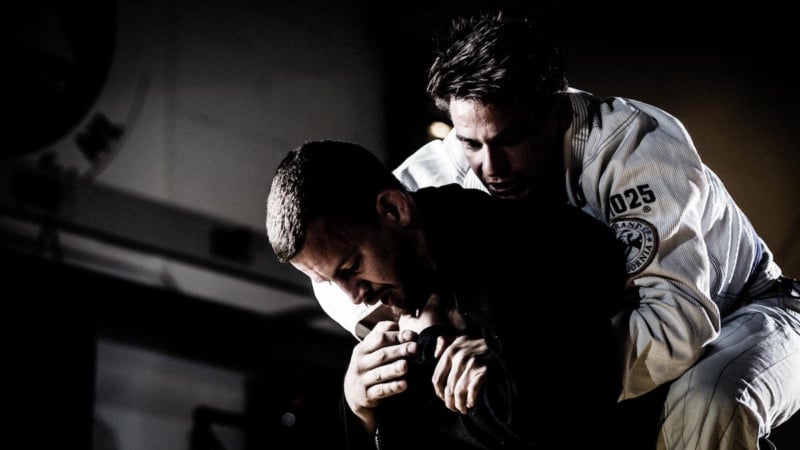 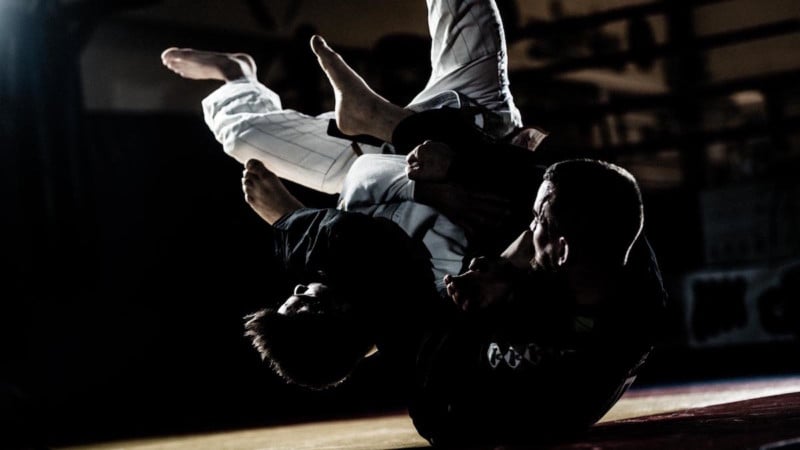 Backlight is cruel mistress. Results can be epic and have an incredible quality to them, but treat backlight just the wrong way and you might end up with some less satisfying results.

You’ll want to be particularly careful when including the light source in your image; in these situations, cameras will often have a hard time focussing on your subject because of the loss of contrast. Even if you do manage to obtain good focus (perhaps manually), the contrast in your photo will be lower than you’re used to. This can be fixed to a degree in post-processing.

I do encourage you to experiment with bring the light source right up to the edge of the frame though. In the photo above you can just see a hint of a glow from the octabox, which adds an additional visual element.

Your camera may have a hard time metering the light. If you’re exposing manually then just check the results and adjust as needed. I generally shoot in aperture priority though, and using the spot metering method usually yields perfectly usable results.

Photos that are slightly underexposed pose no real problem, but you don’t want to start out with a pitch dark subject in post. 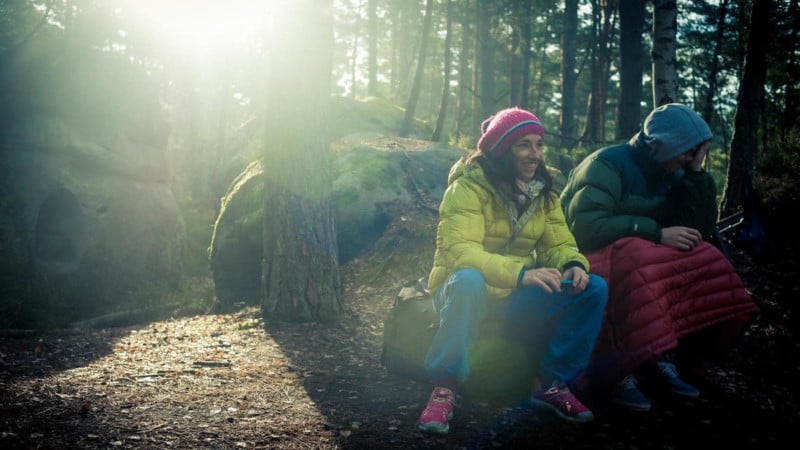 Don’t be afraid to overexpose parts of your photo! If you include the light source in your photo, then it’s perfectly normal for that to be all white. Backlit photos often aren’t technically perfect in terms of exposure, but in my opinion this just adds to the epicness and rawness.

Keep an eye out for snow, rain, and dust in backlit situations. These all look great with light hitting them from the back. I actually created a whole series using my Elinchrom ELB-400 unit in a climbing gym, as sort of a visual study of the chalk used in climbing. 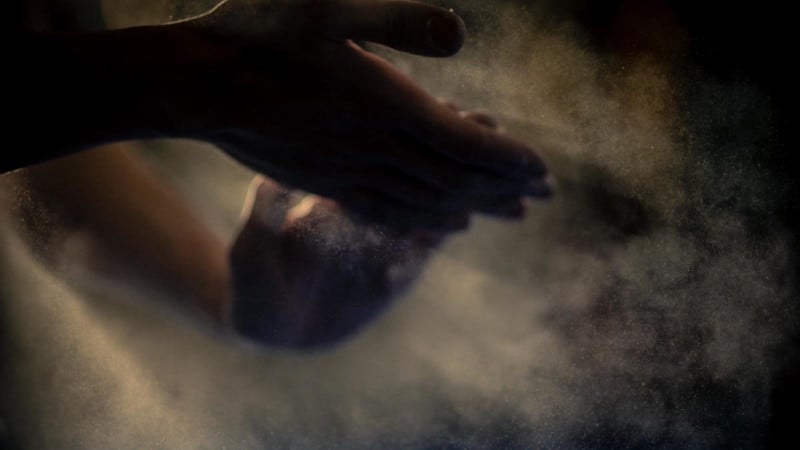 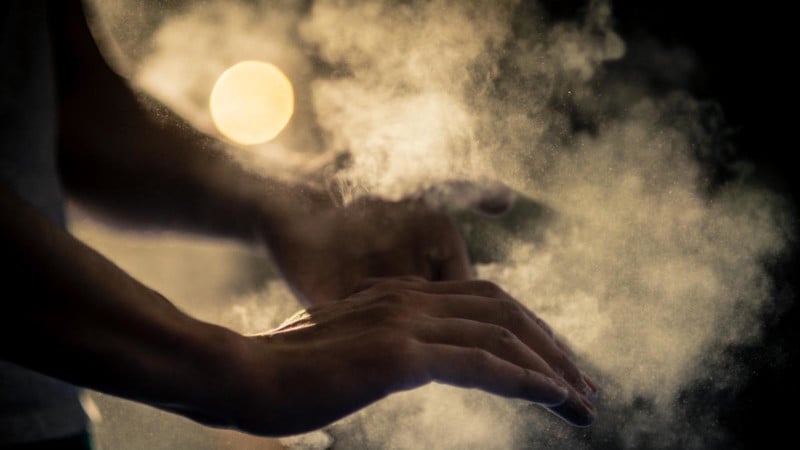 Use the technology at your disposal. You’d be amazed at the level of detail software like Lightroom can bring back from shadow areas. Try to keep this in the back of your mind while shooting and culling your images. Don’t discard a light situation or underexposed photo too quickly.