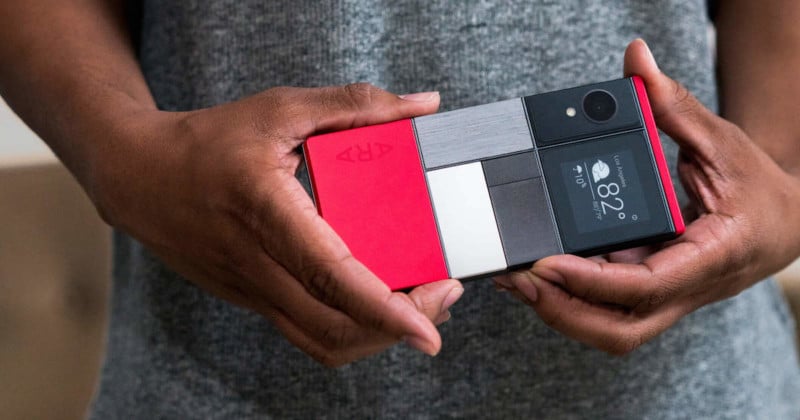 Five little words followed by a small ‘pop’ from the prototype phone sitting on the table in front of him, and Google’s Rafa Camargo made the the crowd at the Google I/O developer conference go wild.

He also made us wonder if this may just be the future of smartphone photography as we know it. You can watch the “magic moment” in the short 10 second video below to see if it has the same effect on you:

"OK Google, eject the camera." Now that's what I want in a modular phone. Assuming it only recognizes me, that is! pic.twitter.com/y7gzXpkL8l

Project Ara, as the modular smartphone is called, has been in the works for a long time at Google but it’s finally picking up steam after some ups and downs. And the good news for photographers is that peripherals like the camera are going to be Ara’s focus. The current Ara frame Google is working on will contain “all the functionality of a smartphone, plus six flexible slots for easy swapping.”

Don’t like your smartphone camera’s focal length or aperture? Want a specialized module like an IR camera? Want your smartphone’s camera to be the most expensive and capable peripheral on your phone? Or maybe you want two… or three cameras!

No problem, just put a better (or two better) module(s) in. The sky’s the limit and third parties, maybe even serious camera companies, are welcome to develop hardware of their own for your Ara phone. Imagine having an actual Nikon or Canon or Leica module, developed and built by the camera giant, to snap on? That would be a huge deal.

Or, as CNET’s Sean Hollister (who actually got to play with the module) put it in a recent article:

Of course, it’ll all still have to start with those 5 simple words, “Ok Google, eject the camera.”

The TSA Gave My $2,800 Macbook to Another Passenger