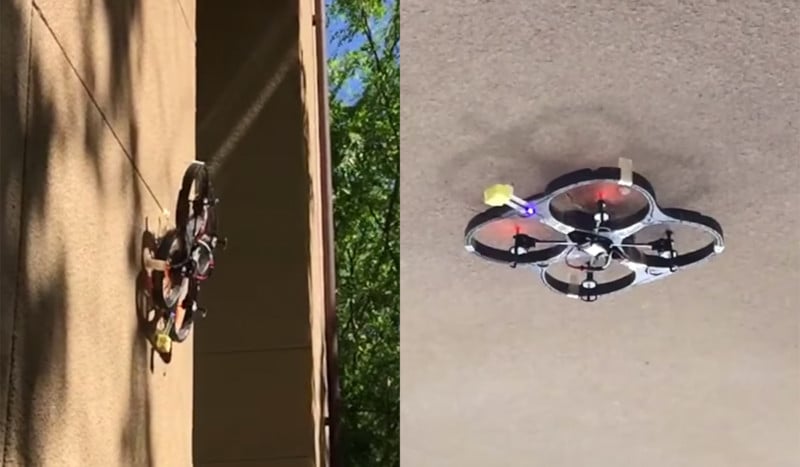 Researchers at Stanford University want to give your drone superpowers. Okay maybe not superpowers, but they have developed a drone that can land on walls and ceilings, clinging there like a robotic insect.

The drone was originally the idea of graduate student Hao Jiang, and it performs its rather useful parlor trick by using tiny hardened steel microspines. When it hits a wall or the ceiling, it compresses its “landing gear” and the microspines latch onto the surface, allowing the drone to hang there and turn off its rotors.

You can see how this works in the GIF below:

Ideally, the surface being used is a bit rougher like stucco or cinderblock, where this ‘perching’ system seems to work best. If your only options are smooth surfaces, you may be out of luck; however, if you do fail to latch on properly, the group is developing automatic recovery systems that will keep the drone from falling to the ground.

Here’s a video showing the perching system in action, helping to attach a drone to walls and ceilings around campus. Given the right surface, it works like a charm:

The hope is that this tech will make it possible to deploy cameras to difficult to reach or dangerous places, and allow drones to film or capture photos for a long time without having to waste battery hovering.

For photographers, we could imagine this kind of perching ability used to capture time-lapses from otherwise impossible vantage points, or simply to significantly extend your drone’s battery life between shots.

An Interview with Gregory Crewdson