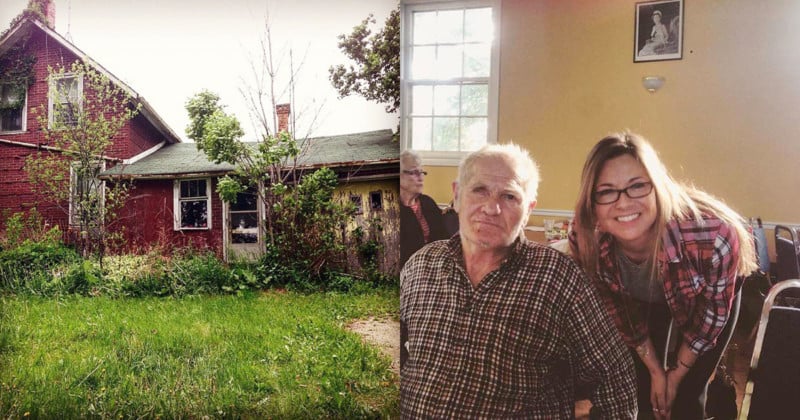 Exploring and photographing abandoned houses always comes with its share of surprises. It also often confronts you with some moral questions and scenarios — there are many “what if’s” that can be associated with this hobby.

It is up to each person individually to decide how they are to deal with these and all the other hypothetical “what if” scenarios while exploring abandoned places, and that is all a part of the excitement of doing this.

Besides these “What If” scenarios, we are also often faced with the question “Is it really abandoned?.” My photos often get scrutinized by the viewers and I frequently see comments like “that’s not abandoned. “Yes, it is entirely possible that the homes we are poking around in are not abandoned. It could be entirely possible that the elderly owner(s) have been moved to a nursing home or care facility, it could be that the residents recently passed away and the family is still figuring out how to deal with the property and its contents… or, it is actually abandoned.

The two points above were made very real last year by an Ontario explorer and abandoned photographer who goes by the handle “The Tourist”. The Tourist — AKA Leslie — posts her photos on Instagram and attracted attention last year for her numerous interesting shots from abandoned places in Ontario.

In June 2015, she published an Instagram post after having been confronted with two of the points I mentioned at the beginning of this post: “What if it’s not abandoned?” and “What if I find a person inside?”

On her birthday, The Tourist was on her way home after a day of exploring and decided to make one last stop at a house she had been curious about for some time — this was a decision that would not only change her life, but that of another. I will let you discover this story just as I had, through her words and Instagram photos: 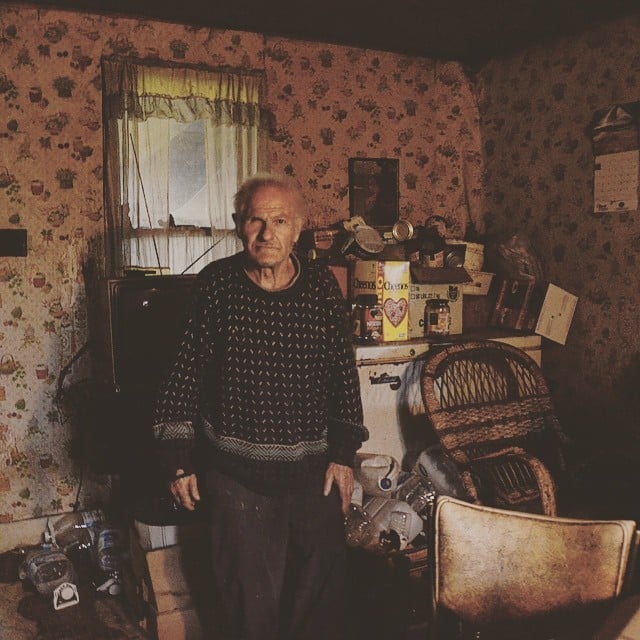 This is Lawrence. He lives in a house I had believed to be abandoned. The driveway is overgrown, the roof is caving in and the interior would lead anyone to believe this land had been deserted. I found him in the living room.

He has a hard time getting around so he spends most of his time in there. Alone. He is missing his right eye and has cataracts infecting the left. Even after noticing a stranger essentially helping themselves to his life, he was nothing but sweet and kind to me. He was even nice enough to let me take his picture which I will always treasure.

He is a beautiful soul and I plan on visiting him a lot. I’m posting this picture in hopes that it will inspire at least one person to reach out to someone they may have lost contact with or perhaps just forgot about. These old souls are still full of life and I feel blessed to have met this one.

I’m making him some meals to take over this week. I don’t think he’s eating very well.. If at all. Some veggie soup and mashed potatoes will hopefully help fill him up a bit. Easy to chew but good for the soul. He overwhelmed me with how kind he was.. I can only hope to return the favour a bit. 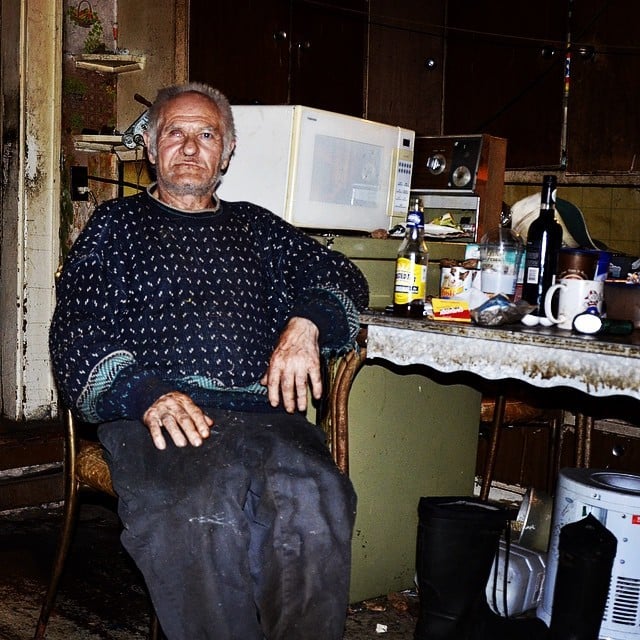 Tonight was the first of what will be many dinner dates with my new friend. Over the course of 3 hours we ate and drank and laughed. I was fortunate enough to hear about his life.. His struggles and his triumphs. This truly was one of the best experiences of my life & I can’t wait to share another meal with such a gentle soul.

He is THE kindest man. He has melted my heart. I brought him some chilli and tea biscuits and some snacks for the next few days until I can make it back later this week. I hope to have most of the trash cleared out and a few repairs done by the end of the summer. Give him a bit of his home back :)

He breaks my heart and puts it all back together in the same visit :) he told me he suffered a stroke about a week ago. He said he couldn’t move his hands.. It took him over 4 days to seek medical attention. This was just one of many heartbreaking stories I heard last night. He just needs a friend.. Someone to make sure he’s okay .. Reassure him he is loved 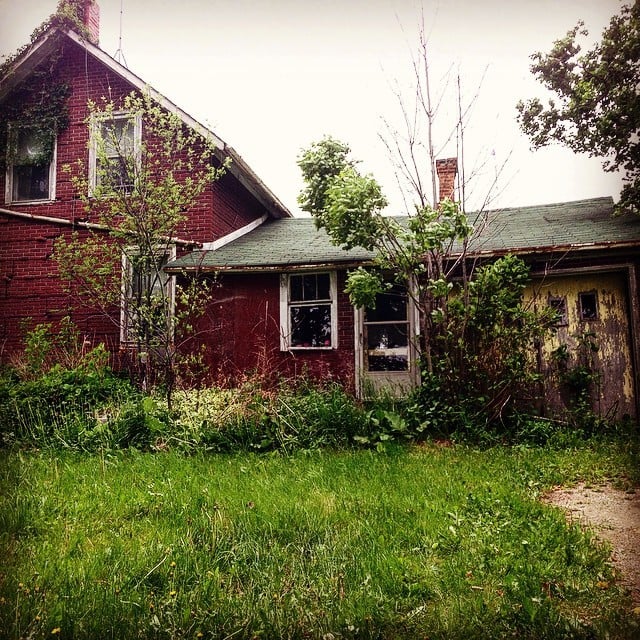 The house that stole my heart – this is the exterior of my new friends home.

Tonight we sat outside and enjoyed the beautiful evening. He explained to me how his injuries started in 2000 when a bull fractured his hip. He told me of his brothers illness and how they have lost touch.

He said I was a blessing to him. 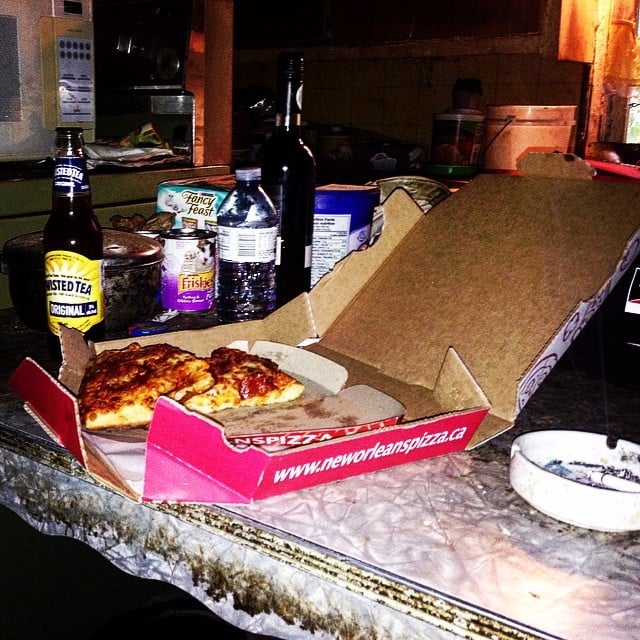 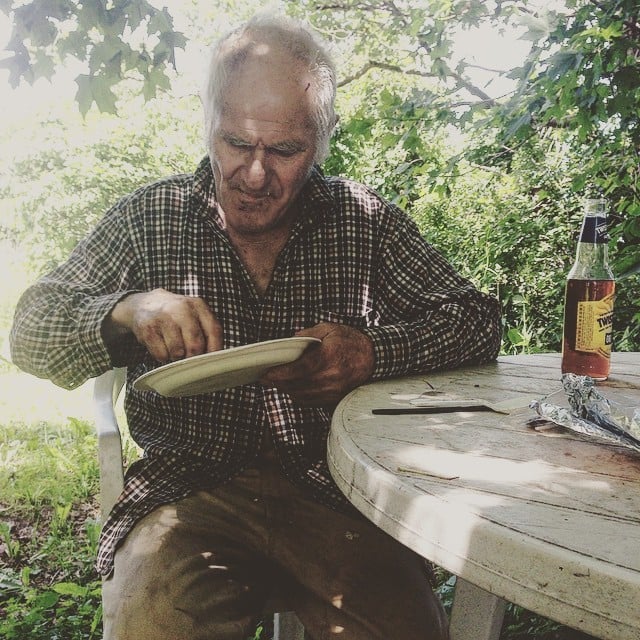 Lunch with a friend 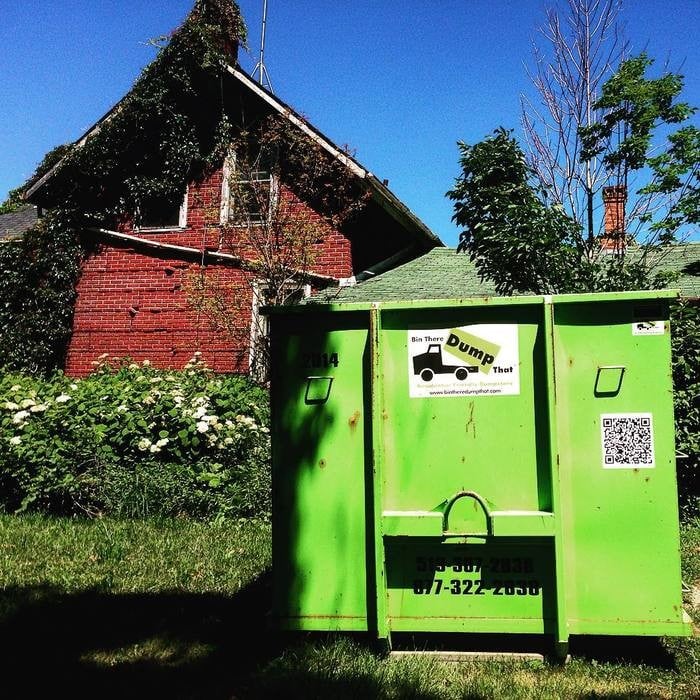 An update on my friend – he is in good spirits and is very happy to have some room in his home. I’ve managed to remove his old fridge, stove, and chest freezer, along with numerous bags of garbage and other content.

This was all made possible by a very generous company and a few awesome boys with big hearts and strong lower backs. I can’t thank everyone enough for their support and generosity during this period in my life – and in his. He is beyond grateful, not just to me.

He knows you are all following his story :) After a few recent visits to the doctors, it’s apparent that his health is declining, rapidly. These may be the last few months I have with my friend and I plan to make them as comfortable and enjoyable for him as possible.

He’s informed me of his funeral arrangements and has asked me to be there. I told him I wouldn’t have it any other way. He shared something with me that will stay with me forever. He said the day I showed up was the best day of his life.

As self righteous as I feel writing that, I understand how he feels. The best day of my life was when I met him. He gave me the chance to really do something for someone – an act of kindness with no expectation of reward. It’s a rare opportunity and I’m glad I was able to accept the challenge. – xo 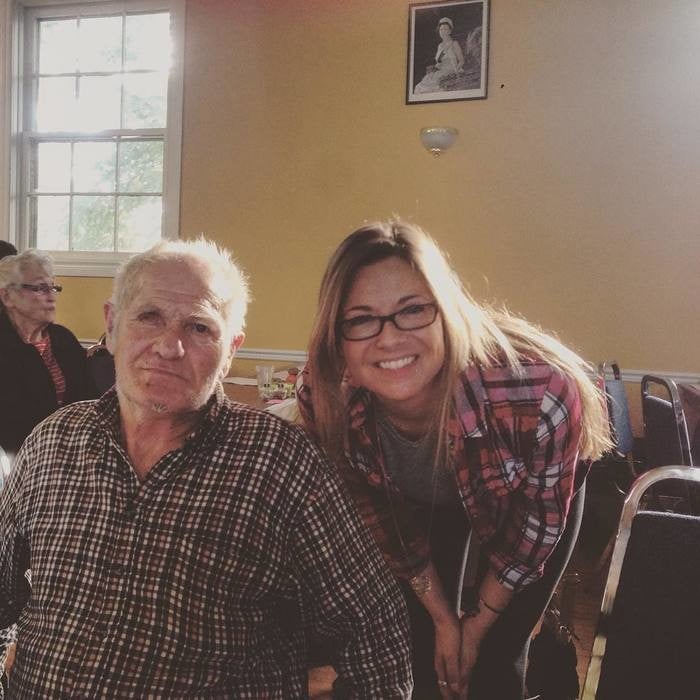 Update: A few weeks ago my friend asked if I would go to a church BBQ with him … Our first outing!!!

I was so happy he had asked me and couldn’t wait to go. Tonight was our dinner date … The food was amazing .. Provided by the local farmers in the neighbourhood and way too much pie baked by all their lovely wives.

It was great to see him out of the house and around the people he’s known his whole life. Driving home tonight I couldn’t help but think to myself how lucky I am to have this opportunity to be a part of such a wonderful persons life.

My friend is truly a blessing xo 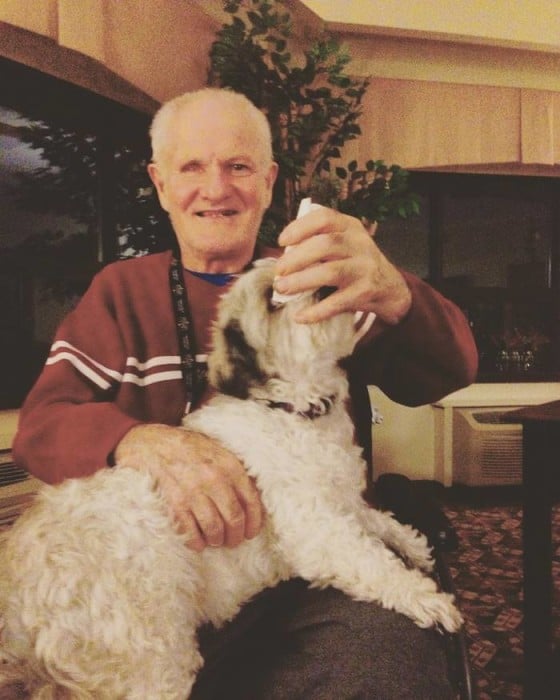 Well it’s been a while since I’ve posted anything about this handsome fella so I figured I’d give everyone following his story an update.

After a prolonged stay at two different hospitals after his last stroke, Lawrence is now living at a local retirement home and doing much better. He’s safe and warm and seems to be fairly happy to be around some new people, although I know he misses home.

I bring my dog Violet with me when I go for my visits, and she has now become a favourite around the home and she seems to enjoy herself thoroughly (indulging in yet another cookie as seen above). His birthday is coming up shortly (Valentines day) and we can’t wait to celebrate with him, properly… With less pastry for the puppy. 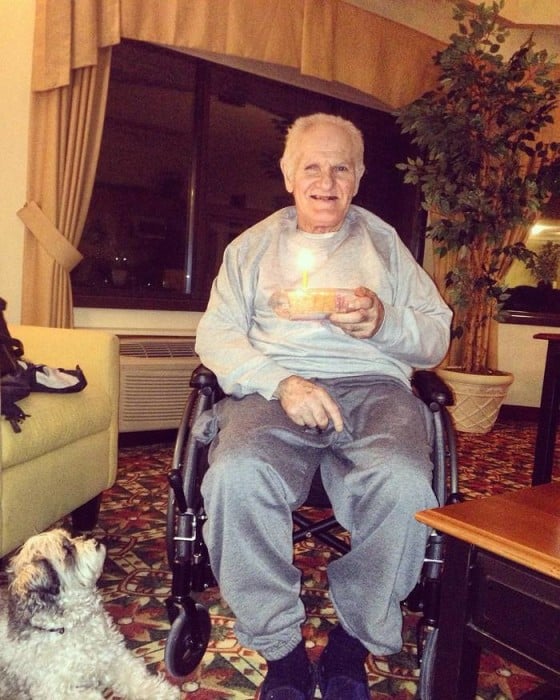 “Happy Birthday to this young fella”

This is definitely not the end of the story between Leslie and Lawrence and I suggest that anyone who reads this blog post follow The Tourist on Instagram and follow along with this amazing story and gesture of goodwill and selflessness and ask yourself the question: what would you do if given this scenario?

About the author: Dave C. is an urban exploration photographer based in Toronto, Canada. You can find more of his work and writing on his website Freaktography and on his Facebook. This article was also published here.

Check Out These ‘Pro’ Portrait Posing Tips from the 1980s

This Intervalometer Lets You Preview Your Timelapse While You Shoot It