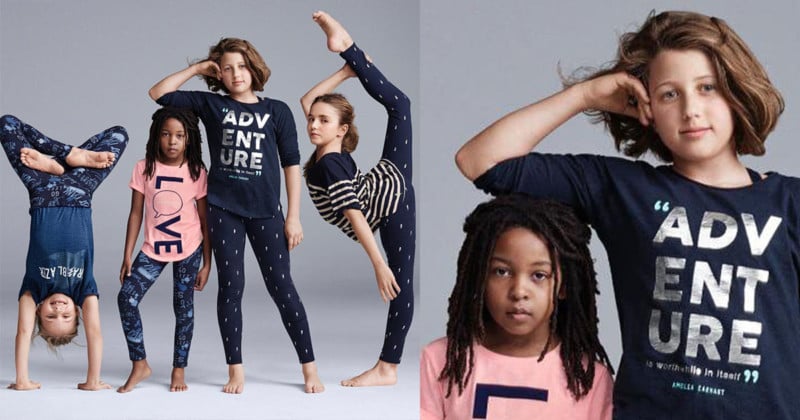 Gap is apologizing this week after a photo in its new Gap Kids ad campaign sparked controversy for a “racially insensitive” pose. The photo shows a white child model resting her arm on a black child’s head.

The ad campaign is a new collaboration with TV host Ellen Degeneres’ lifestyle brand ED, and it features a dance group called Le Petit Cirque that comprises three white girls and one black one. 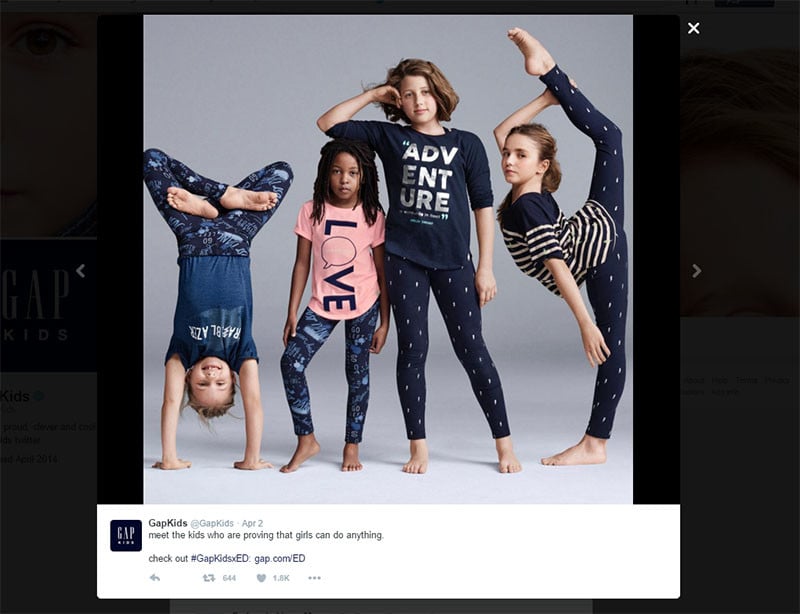 “…it becomes problematic when the black child is positioned to be a white child’s prop,” writes Kirsten West Savali over at The Root. “Contrary to popular opinion, popular culture and politics, black women and girls are neither armrests, backdrops nor firewalls, despite white supremacy literally placing its burdensome weight on our heads.”

“This child deserved so much better, so do better, Gap—or not. It’s your business to lose.”

Here are some of the critical Tweets that were posted by people unhappy with the photo:

And is that girl resting her arm on that black girls head? @GapKids

Who approved this message? ? pic.twitter.com/25YcH56XMh

@GapKids someone needs to get fired. it was ignorant in the first place to have 1 token black girl, then you make her the arm rest?

@GapKids Thanks for perfectly illustrating what 'passive racism' looks like in mainstream media. #DiversiryFail She is NOT your arm rest. ?

@GapKids What is the message for Black girls? Are they meant to be seen as subordinate? Shame on you, Gap! pic.twitter.com/7U41B8lFI5

@GapKids the best way to lose the black demographic. Making your only black model an armrest ?

.@GapKids I'm white and my eyes go directly to the black girl being reduced to an armrest. What's wrong with you? https://t.co/F05yY9SBt7

That ad certainly isn't suggesting that *black* girls "can do anything," @GapKids. It's incredibly distasteful to your black consumer base.

Gap soon responded to its critics with an apology, saying that it will be replacing the controversial image with a different photo.

“As a brand with a proud 46-year history of championing diversity and inclusivity, we appreciate the conversation that has taken place and are sorry to anyone we’ve offended,” a spokesperson tells Co.Create. “This GapKids campaign highlights true stories of talented girls who are celebrating creative self-expression and sharing their messages of empowerment. We are replacing the image with a different shot from the campaign, which encourages girls (and boys) everywhere to be themselves and feel pride in what makes them unique.”

Other people are speaking out in defense of the ad photo. It turns out the two girls in the photo are sisters — daughters of actress Brooke Smith — and that Gap previously published a non-controversial ad with the same pose — except with the races reversed.

@TheRoot girl with arm resting on her shoulder is her sister She didn't talk in video because she was 2 shy. everyone needs to calm down.

Does the @GapKids pic on the left make the pic on the right okay? Let's debate pic.twitter.com/rCFbK4uG5y

It Took 17 Square Meters of Mirror to Get This Shot