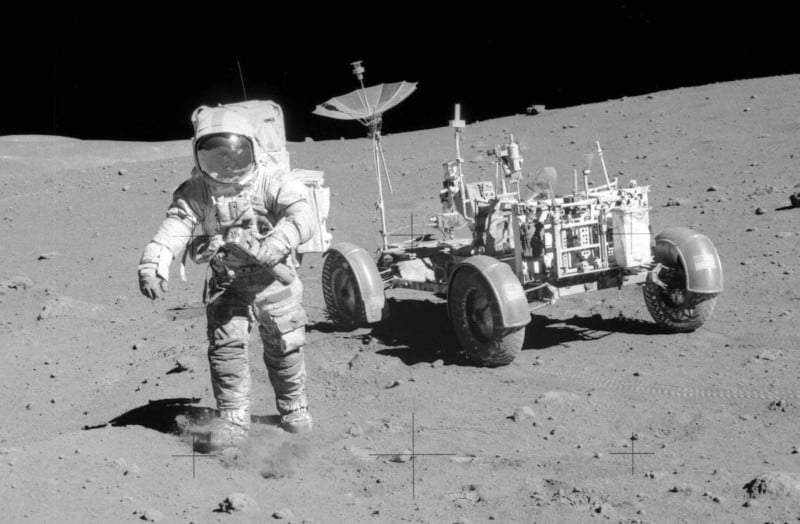 Do you have between $400K and $600K laying around, just begging to be spent? If you do, you could soon be the proud owner of the Zeiss Tele-Tessar 500mm f/8 lens—AKA the first telephoto lens used on the moon.

The incredibly valuable Zeiss lens will be auctioned off by Boston-based RR Auction, and was used by Commander Dave Scott to take 293 photos during the Apollo 15 mission using their special Hasselblad Electric Data Camera (HDC). It’s been in his personal collection ever since.

But the simple fact that this lens has been on the moon isn’t its only selling point, the auction house shared some additional fun tidbits.

The lens took a tumble (along with Commander Scott) while being used on the moon, it has all the scuffs and wear associated with “extensive use in space,” Commander Scott autographed the duct tape covering the rear of the lens, and that same duct tape … it is “believed to be from a roll flown on the mission and retains some lunar dust.”

You may get lunar dust! Plus, the lens comes with a letter from Scott himself touting the importance of the Zeiss 500mm to the mission.

Here are a few more images of the lens. You see those big tabs? Those are for controlling focus and aperture with big, clunky spacesuit gloves on: It’s difficult to overstate how unique and interesting this piece of gear is, but Robert Livingston, Executive VP of RR Auction, put it well when he said:

The holy grail of space collectables are those that have made it to the moon. This is a quintessential piece of photographic equipment used extensively on the lunar surface, making it a truly remarkable flown artifact from Apollo 15.

As mentioned above, the lens is expected to go for between $400K and $600K when it goes up on the auction block between April 14th and April 21st. To see more photos of the lens, learn more, or prepare yourself for a serious bidding war, click here to head over to the RR Auction website.