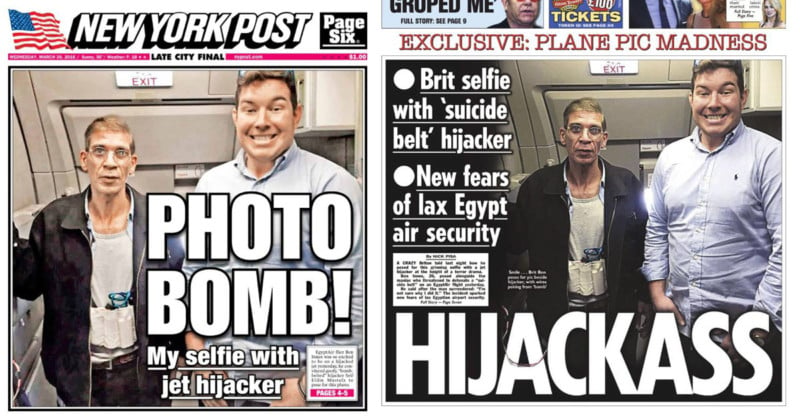 EgyptAir Flight 181 was hijacked yesterday by a man wearing a fake explosive belt. During the 7-hour ordeal, one of the hostages decided to ask the hijacker to pose for a selfie.

That man was 26-year-old Ben Innes, a British health and safety worker. With the translation help of a cabin member, Innes told the hijacker, Seif Eldin Mustafa, that he wanted to take a photo with him.

“I figured if his bomb was real I’d nothing lose anyway, so took a chance to get a closer look at it,” Innes tells The Sun. “I got one of the cabin crew to translate for me and asked him if I could do a selfie with him.”

“He just shrugged OK so I stood by him and smiled for the camera while a stewardess did the snap. It has to be the best selfie ever.”

Gizmodo reports that Innes apparently shared the photo with friends through WhatsApp: Today, Innes bizarre selfie has sparked controversy and has appeared on the covers of newspapers and magazines around the world.

Today's cover: "I figured if his bomb was real, I'd nothing to lose anyway" https://t.co/lscax865Kx pic.twitter.com/QQDkBrDqjA

The photo has sparked plenty of discussion and controversy as well. First off, The Guardian argues that it shouldn’t even be called a selfie in the first place, because it was taken by a stewardess, not Innes himself.

This guy took a selfie with the Egyptair hijacker while he was held captive…https://t.co/FpGHtjbpo6 pic.twitter.com/WTa4RwDvKK

Others are saying that the stunt was reckless and could have put others in jeopardy.

“I suppose it’s a sign of the times,” security expert Will Geddes of ICP Group tells The Sun, “it’s the Facebook selfie generation — but this was highly irresponsible.”

I Found a Camera Graveyard in a Newspaper Basement