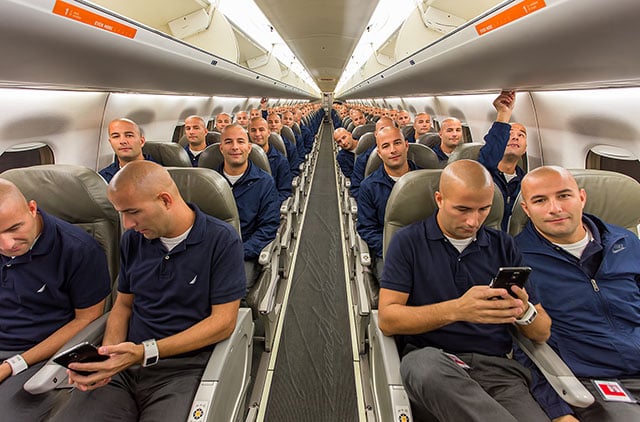 Check out this crazy self-portrait photo by a guy named Timothy LaBranche. It’s a composite image showing LaBranche posing as all 100 passengers in the cabin of a passenger plane.


We got in touch with LaBranche, who offers some details on how he created, “100 Tims on a Plane” (you can find a larger version here).

First of all, he’s an airline employee who works for JetBlue Airways out of Houston, Texas. The idea for this photo had been brewing in his mind for months, but he didn’t have a plane stay overnight in his station until October of this year.

When the opportunity arose, he arrived at work at 3AM (an hour before his shift was scheduled to start) and set up his gear at the front of the Embraer E-190.

LaBranche used a Canon 6D with a 17-40mm f/4 L lens. The 6D’s Wi-Fi allowed him to use the EOS Remote on his phone to trigger the camera shutter from the seats.

The entire shoot lasted for one hour from when LaBranche turned on the plane’s lights to when he snapped the final shot. It took another 5 hours of post-processing to combine all the photographs together in layers to create the final shot. He was “literally zoomed to 500% toward the back of the plane, and editing at pixel levels,” LaBranche tells us.

He’s pleased with the final image, but there are already ideas in his mind for what he could do different next time: “I wish I would have had time to put multiple outfits on, but time was not on my side.”

P.S. Want to know how to create “clone photos” of your own? Check out this tutorial we published back in 2009.