The backlash has begun. A day after Instagram announced that its feed will soon be ordered by a Facebook-style curation algorithm, over 100,000+ people have signed an online petition to “Keep Instagram Chronological.”

The petition was launched on Change.org by a user named Sarah Heard, and the campaign quickly attracted 70,000 signatures in just the first 24 hours. The organizers are also introducing the protest hashtag #keepinstagramchronological. 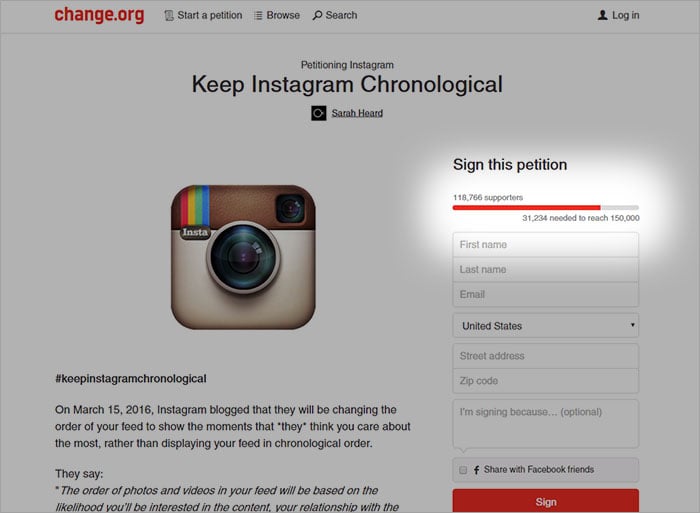 “Is this something that the community really wants? After what happened when Facebook switched to algorithm-based feeds, it’s certainly not something that small business’ will want!,” writes Heard. “At the very least, shouldn’t the community be able to opt-in, rather than having it mandated that this is how we will now see our feed?”

“Instagram have advised they will listen to our feedback so that they get this right,” she continues. “So, if you do not want your feed to be presented in an order that you don’t have any control over and would prefer to have it presented in the current chronological format […] please sign the petition […]”

“We are users of Instagram and do not want to be forced into having our feeds display in an order chosen by an algorithm. We want the ability to at least choose to keep our feeds in chronological order.”

If Instagram does follow through with this change, then photos and videos in your feed will be ordered not by when they were posted, but by how much Instagram’s algorithm thinks you’ll be interested in them.

On Facebook — which owns Instagram — the order and visibility of posts in your feed is determined by a secret algorithm. Some stories aren’t shown to you at all if Facebook doesn’t deem them worthy of your attention. Want to ensure that people see something you post? You’ll have to pay Facebook for that privilege.

If Instagram’s new system becomes similar to Facebook’s existing one, then one day you may find yourself having to pay to guarantee that your Instagram photos will be seen.