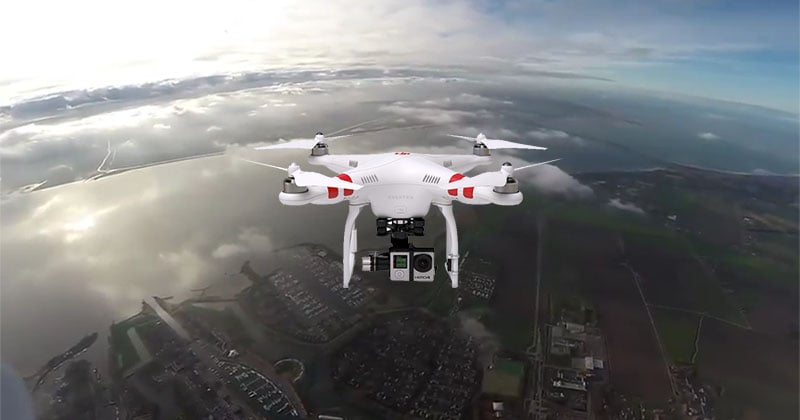 The US and EU both have regulations that prevent you from flying your drone above ~500 feet. Someone in the Netherlands decided to ignore the law and fly their camera to 11,000 feet.

The anonymous drone owner originally posted his footage to YouTube, saying that they were trying to break a world record with his DJI Phantom 2 drone. That video was soon taken offline, but it has resurfaced on vidme. You can watch it here:

The 4-minute video shows the drone’s ascent all the way up to 3.4 kilometers, or ~2.11 miles, above ground (~11,155 feet). At this altitude, the drone is flying above a layer of clouds. With only 27% of their battery life left, the drone operator decided to begin the descent back down to Earth. It had just 4% by the time it landed.

Needless to say, this is a highly dangerous and illegal stunt, and the operator is being called “stupid” and an “idiot” in news articles about it. A drone flown to these altitudes could collide with an airplane, or it could plummet to the ground if it were to run out of battery at a high altitude.

So unless you want to put people’s lives in danger and face serious punishment from your government, don’t try this yourself.

Photographer Saves Reporter from Getting Crushed by Car Crash

Watch Lightning Explode Over the World’s Tallest Building at 1977FPS