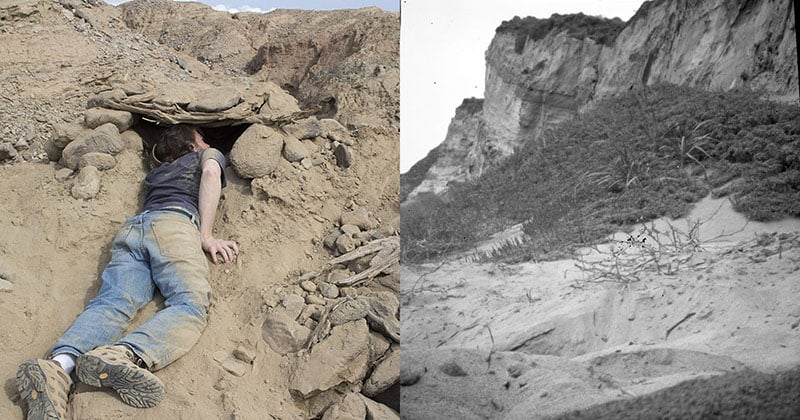 “Site Specific Cameras” is a fascinating project by photographers David Janesko and Adam Donnelly. To shoot landscape photos, the duo creates large cameras out of materials found in those landscapes.

For example, if they’re planning to photograph a forest, they’ll build a camera in that forest with things found in the area — things like logs, sticks, leaves and dirt.

The aperture of the camera is always something found in the locations as well — anything that has a preexisting tiny, round hole.

“In this way the physical components of the landscape, feedback into the character of the camera and the final photograph,” the duo writes. “The cameras are also large enough for one of us to fit into. We act as the mechanical parts of the camera, like the shutter and film advance.”

Here are some of the landscape cameras and resulting landscape photos they’ve created over the past few years while working around the San Francisco Bay Area:

“We have spent the last few years using this process to catalogue the varied landscapes around the San Francisco Bay Area: redwood forest, oak woodlands, rocky and sandy beaches, and grasslands,” the duo says. “We are currently working on taking the project to new places.”

Donnelly’s website has more examples of the duo’s cameras and resulting photos.

They’re currently running an Indiegogo fundraising campaign in order to raise money to take this project on a road trip throughout the United States.

Image credits: Photographs by David Janesko and Adam Donnelly and used with permission