Photographer Nao Tharp of Los Angeles, California, just released this short video that shows something neat he captured on a freezing cold winter night back on December 12th, 2015. While shooting a time-lapse of the Geminid meteor shower at Red Rock Canyon State Park in California’s Mojave desert, his camera caught a bright meteor explosion and a resulting orange glowing plume that lingered for about 40 minutes.

The video above shows the same explosion at different magnifications and playback speeds.


“It was a bright spark illuminated the entire rim of eroded sandstone canyon, followed by orange fume floating in the sky,” Tharp tells PetaPixel. “According to my calculations based on the time lapse setting and EXIF data from the resulting images, the glowing orange fume floated in the air for a matter of 38.5 minutes until it framed out.” 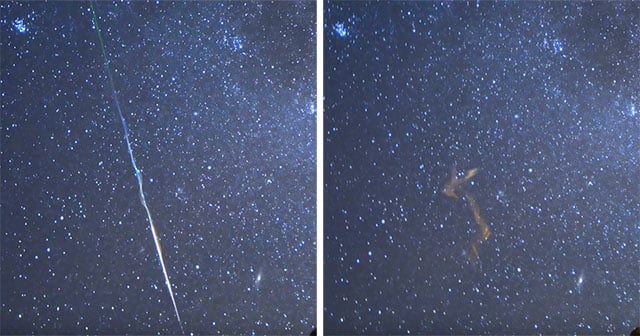 Here’s the science-y explanation behind what you’re seeing:

“As the icy particle of the meteoroid about the size of a sand grain enters the Earth’s stratosphere at a such high speed, it explodes and turns into plasma due to atmospheric friction,” Tharp says. “The energy of the plasma stimulates molecules of the air and forces them emit photons, resulting in the glowing fume-like particle that floats in the sky.”