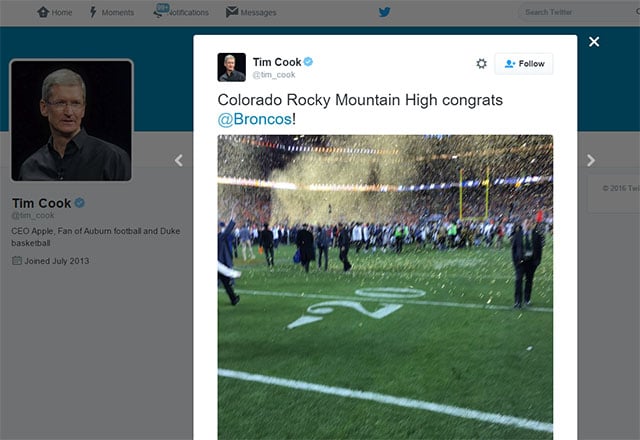 Apple loves promoting its iPhone camera quality by sharing beautiful photos shot around the world by iPhone owners. So it’s curious that Apple CEO Tim Cook decided to share a blurry photo on Twitter while attending Super Bowl 50. And now the Internet isn’t letting Cook live it down.

…and here’s what Internet users had to say about the shot:

@tim_cook Everyone is not a photographer. pic.twitter.com/rfJCcqjurX

@tim_cook Shot on an iPotato 6+

@tim_cook @Broncos Hi Tim, can you replace your profile picture for this one? Thanks pic.twitter.com/sC2IYVzQQo

Come on @tim_cook ! This photo looks like your future plans for #Apple … Think different and focus!

@tim_cook @Broncos Buy iPhone, Tim. Your old Nokia is not that good for shooting movement.

@tim_cook Uh… Is the message here that iPhones take terrible photos of important moments?! Because that really seems to be the msg here.

@tim_cook was this pic taken with a toaster?

Cook did shoot a somewhat better photo, though, and other people had nicer things to say to the CEO:

Love this @tim_cook picture. It’s from a fan, not from PR. https://t.co/c3cfs0aMIy

Still, the Internet consensus appears to be that Cook’s photo isn’t a good look for iPhone’s highly touted camera, so Cook might want to think about passing his snapshots by Apple PR from here on out. 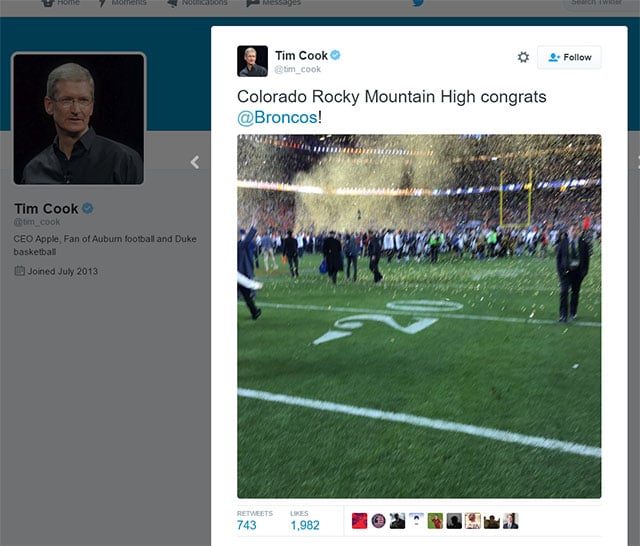 These Infrared Photos of Washington, D.C. Show the Capital in a New Light