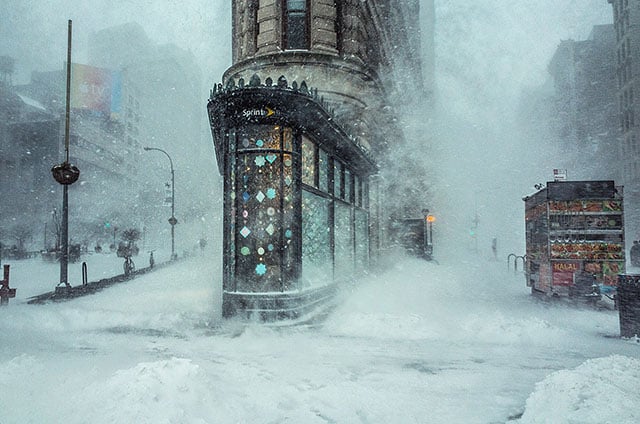 As a blizzard ripped into New York City this past weekend, street photographer Michele Palazzo went out and began wandering around to see if he could spot any people on the sidewalks. The streets were barren, but Palazzo did manage to shoot this beautiful shot of the Flatiron Building early Saturday morning using his trusty little Ricoh GR.

“I was impressed by the wind and the snow swirling around my favorite building in the city, so I took some shots,” Palazzo tells PetaPixel. “This shot was perfect.” The image, which was slightly tweaked in VSCO Cam, is now getting attention on the Web for how much it resembles an impressionist painting from the 19th century.

Update on 1/28/16: The art installation in the window of the building is “Flakes” by artist Chelsea Hrynick Browne.

Image credits: Photograph by Michele Palazzo and used with permission