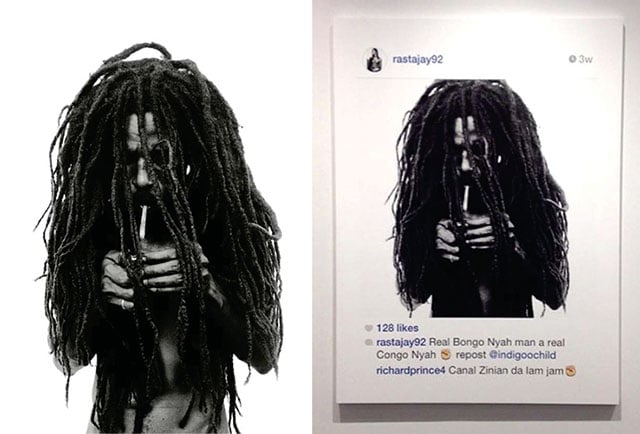 Artist Richard Prince sparked huge controversy last year by taking Instagram photos without permission, making extremely small edits to them, and then selling them as fine art for up to $100,000 each.

Now, one of the outraged photographers who had his photo used by Prince is suing the artist for copyright infringement.

artnet reports that renowned photographer Donald Graham is suing both Prince and the Gagosian Gallery in NYC (where the “New Portraits” exhibition was held) for copyright infringement. The federal complaint was filed on December 30th, 2015, and accuses Prince and the Gagosian of using one of his photos, “Rastafarian Smoking a Joint,” without permission.

The B&W photo, which shows a Rastafarian man lighting a marijuana cigarette, had been reposted on Instagram by @rastajay92 before it was found and used by Prince.

The complaint says that the the copyrighted photograph had been used with the original image “fully intact,” with only minor changes made to the work, such as cropping and wrapping it in an Instagram interface. Prince added his own touch to each of the Instagram photos by inserting his own comment below the shots. In this case, he wrote “richardprince4 Canal Zinian da lam jam” and included a fist emoji.

Here are two exhibit images in the complaint that show the original photo, along with a photo of the Prince artwork as it appeared in the “New Portraits” show:

Here are two Instagram posts made by Graham last year after the photographer discovered Prince’s use of his work:

How to credit a work: "Rastafarian Smoking a Joint" © 1997 Donald Graham. #PrinceofAppropriation

Appropriated Exhibit. The only way you'd know my work was a part of this display is…well, that's just it, you wouldn't know. #PrinceofAppropriation

Although he has built a career upon using other photographer’s work without permission, and although he has been sued for his actions in the past, Prince has remained relatively unscathed in court. The court ruled that a prior instance of Prince’s appropriation was fair use back in 2013, and the photographer, Patrick Cariou, ended up settling the matter with Prince out of court.

It’ll be interesting to see how Graham’s lawsuit plays out, as there are many other photographers who are equally outraged by Prince’s actions toward them.