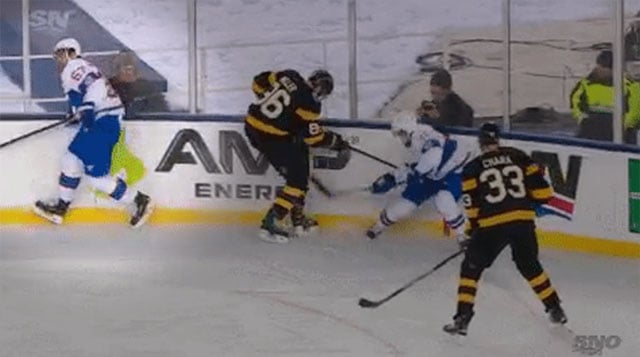 The incident happened yesterday at the 2016 NHL Winter Classic between the Montreal Canadiens and the Boston Bruins. Early in the 3rd period, Canadiens captain Max Pacioretty was skating alongside the boards when he ran right into the long DSLR that a photographer had stuck through the hole.

Pacioretty’s forearm took the brunt of the impact, and he had to get the arm attended to on the bench before returning to the game.

“Vision also of Max the captain of the Canadiens, he hurt his arm on a camera that was sticking out of a little hole in the plexi-glass, and was cranky at the shooter man,” writes The Guardian’s live blog of the game. “So many things can hurt you in this game, you’d struggle to get health insurance.”

As you can see from the short clip above, Pacioretty was angry at the photographer, but he placed his blame on the wrong one. He made a gesture toward well-known NHL photographer Dave Sandford, whose epic photos of Lake Erie waves went viral recently, but the guilty photographer was the one to Sanford’s right.

(via Marc Dumont via Eyes on the Prize)

Rooftopping Photographer Dies in NYC After Slipping Off 52-Story Hotel