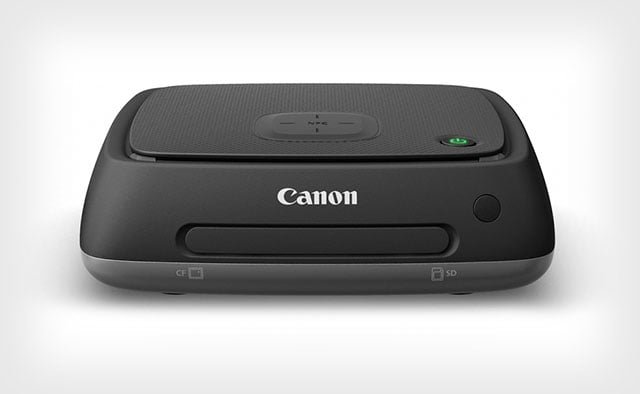 The CS100 Connect Station is a new product, first of its kind, from Canon, and it’s designed to be a home media hub for your photos and videos. It even integrates with your printers — so long as they are Canon brand — so you download, browse and print your favorite images from your sofa.


When it was announced earlier in the year reception was lukewarm and Canon kept quiet until its release late last month. I’ve tried it out day to day for a few weeks now to see if it’s an early Christmas cracker or a Thanksgiving turkey… 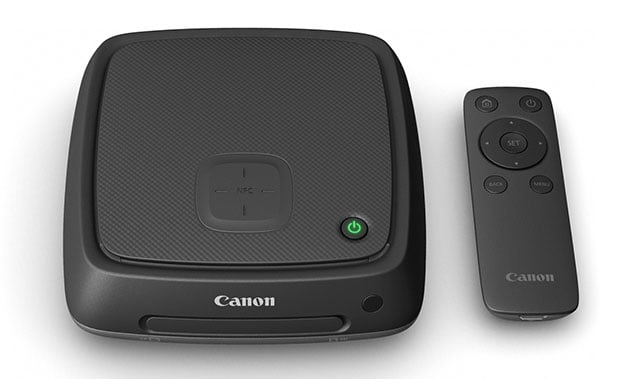 Check out my rapid-fire video review of the CS100 here:

Out of the Box

Alongside maybe an inch of printed instruction manuals — for what is theoretically a “plug and play” device — you get the CS100 unit itself, power cables and a remote control. Batteries included.

Absent are network and HDMI cables… considering the whole point of the device is that it’s a network hub that plugs into your TV, it was annoying to have to find my own!

Setting it up is pretty easy: attach power, network, HDMI cables and you’re done. After that the unit takes a good 30-40 seconds to boot up — so slow you’re likely to want to keep it switched on permanently — and you’re into the configuration and registration process. You need to create an account with Canon’s Imaging Gateway site to register your device and access their internet sharing functions, but after that you’re pretty much up and running.

The hardest part of the whole setup process is taking the back off the remote control to get the batteries in.

It’s immediately apparent the CS100 is aimed mainly at the beginner or casual user — enthusiasts/pros are infinitely more likely to take their images straight to the computer. Still, I’ve tried to review it from the perspective of a range of audiences.

From the outset it’s worth emphasising that the device is optimised for Canon’s ecosystem of products. Although it supports devices and images from other manufacturers it isn’t as streamlined or satisfying a process as you get using 100% Canon kit.

For example, the NFC connection only works with compatible Canon cameras which represent a relatively small slice of their current crop of cameras. Although more and more cameras will shop with NFC embedded it was fortunate I still had the new G3X available to review at the same time – without this camera I wouldn’t have been able to test the NFC function at all. 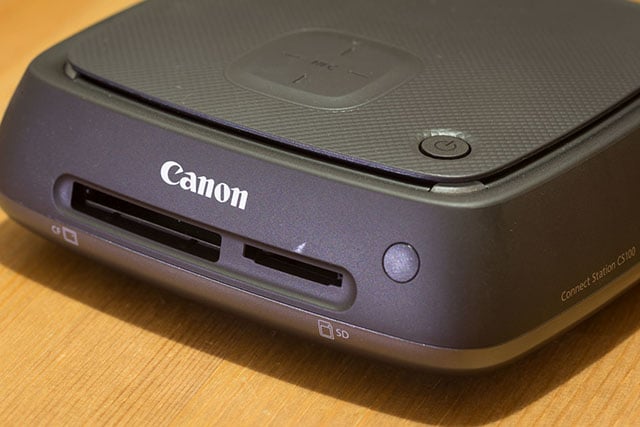 Testing the NFC connection with a card containing a mix of RAW and JPG images totalling 2GB was a slow process, more than long enough to go and make a cup of coffee. It was easy and totally hands-off albeit more time consuming than it would take for me to import the images directly into Lightroom. Importing direct from an SD card was also reasonably fast. The unit supports Compact Flash and SD cards via a pair of covered slots on the front of the device which is masked by a removable rubber panel. This panel is, without a doubt, the first thing you will lose – it detaches completely rather than being attached like the rubber flaps on the side of your camera are. It isn’t actually needed for anything but I managed to lose mine for two days. Something to bear in mind is that you don’t get any control of which images you want to import – it drags the entire card over.

The NFC reader doesn’t register smartphones, tablets or off-brand cameras. I tried using the Sony A7R-II and sure enough nothing happened. To pull images from other devices or Canon kit without NFC you need to connect to the Connect Station itself over wi-fi (via the browser on your phone) and then select the images to push onto the CS100. RAW files from other camera manufacturers do not render, not even DNG. It’s worth pointing our that contrary to what you might read elsewhere online the CS100 does render CR2 files. When images are pulled into the Connect Station they are organised by default into date-ordered catalogues. You can give images a star rating from 1-5 but you can’t name or keyword them – nor would you want to with the clumsily slow on-screen keyboard method. You can also create your own albums too by individually selecting images to include. This is a slow process, especially if you have a lot of photos. Weirdly you can’t name your own albums though and the CS100 just chooses a seemingly random title for them. You can also choose to add music from either your own or a small selection of provided background tracks; all of the ones I tested sounded like annoying iPhone ringtones but I can’t really fault Canon for including generic floaty harp music when they also give us the ability to choose our own!

Once you have photos on the device you can begin to share them around. Printing direct to a Canon printer on your network is one option but I sadly couldn’t test this as I don’t own a Canon printer. You can share to the most common social media outlets direct from the CS100 too after you’ve completed a one-off authorisation process. Finally, you can also pair to another Connect Station and share images that way – this is quite clever but because I don’t know anyone else with a Connect Station I couldn’t test that either. Another minor gripe is that although the CS100 has a USB port, it’s only USB 2.0 and only lets you pull images OFF the device to backup elsewhere. This just makes no sense for me — is the CS100 my backup solution or not? Why can’t I bulk add a ton of images from a thumb drive straight onto it? It’s a peculiar design decision.

Although the on-screen interface looks nice and is well-designed there’s just enough lag when interacting with the CS100 to annoy, and this only increases as you add more images. Comparing it to Apple TV which does a similar “render multimedia content on your TV” job it doesn’t feel quite as slick an experience when there’s a small but noticeable input delay.

We can see what the CS100 offers but let’s look at what the alternatives are.

– I could build a barebones PC connecting directly into my TV which could do much more than the CS100 albeit at the cost of much more setup and configuration in the early stages. It would then use my existing Photoshop subscription and render any image file I cared to throw at it.

– My existing network-attached storage solution is 2 terabytes – twice that of the CS100 – but it doesn’t let me view or send the images to friends and family. Then again, I don’t want it to do that. I want it to safely back up hundreds of thousands of images, documents and all my other files. Not just photos.

– My TV accepts SD cards already so I can already view JPGs. I can also plug in a USB stick to my TV too, turning my TV into a giant digital picture frame if I so wanted. It even plays music.

– My Apple TV automatically shows all of the photos I take on my phone and also has my entire movie and music connection, all from a box a fraction of the size.

– I don’t have kids, but if I did, and I wanted to share the minutiae of their daily lives with grandparents, I’ll shoot on my phone then send to them all simultaneously using WhatsApp. Even my 88 year old grandfather uses WhatsApp. Nicer images taken with my camera would be emailed or more likely processed, printed and framed.

Hopefully these highlight the problem I have with the CS100. At best it just adds an unnecessary extra step in all of the above tasks. At worst it gives me less than what I already have… and all of this for an extra $299.

1. Does indeed make it easy to view photos straight from camera to your TV
2. Easy way to get offsite photo backup for tech-beginners
3. First time you watch the NFC reader import your images is cool

1. Hugely overpriced for what it delivers
2. Storage capacity too small to be a serious backup option
3. Single HDD isn’t reliable enough
4. Offers nothing we can’t already do manually elsewhere
5. Requires Canon devices to get the best out of it

If I squint my eyes and look at the CS100 in the best possible light I can sort of see what Canon were trying to do here. The idea isn’t that bad it’s just the execution in this first version is significantly below expectations, especially at the current price point. I know that keyboard warriors and fanboys will point and laugh before suggesting Canon should turn their efforts towards a proper mirrorless pro-grade camera… and I’d be hard pushed to argue.

The CS100 isn’t quite as bad as producing Lego cameras instead of real ones but it’s not far off.

Honestly, I just can’t recommend this to anyone. It’s simply cheaper, quicker and more reliable to do everything the CS100 does in other ways. They may not be “joined up” but they are usually free, brand-agnostic and, more importantly, already part of our daily lives.

Canon need to improve the specifications and open up the platform, not try to shoehorn us into their brand. I don’t know if Chuck Westfall will read this review, but just in case, here’s what I think a potential CS200 needs to do to make it appeal more:

1. 4TB of storage, RAID 1 as a minimum
2. Add more options to upload to any Cloud storage – giving a super-easy onsite and offsite storage solution
3. NFC that accepts images from any devices
4. Use USB 3.0 and allow proper two-way communication such as adding additional storage (if I could attach my existing NAS to something like this THAT would be good!)
5. Network printing to any brand, not just Canon. The only people using this are amateurs so it doesn’t matter about print profiles or calibration – they just want their printed image.
6. Dedicated apps to control the unit – not this “on screen keyboard” crap. Let us control the CS200 from our phone or tablet
7. At the very least, allow us to view DNG files – ideally all RAW files but I won’t hold my breath
8. Beefier hardware for a smoother, less laggy user experience
9. A remote control that doesn’t need a crowbar to open the battery compartment
10. A significant price drop

Oh and one more thing: Make the rubber front-cover permanently attached to the unit. I was terrified I’d lose it and have to pay for my review copy of the CS100 out of my own pocket.