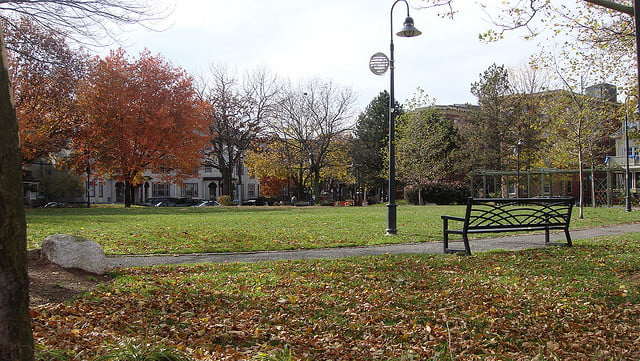 The problem of photographers being seen as “pedophiles with cameras” is widespread and is a subject we’ve reported on and written about many times over the years. One of the latest victims is David Updike, a Harvard-educated photographer and writer.

While sitting in Cambridge’s Dana Park on September 23rd, Updike found himself suddenly surrounded by police officers and questioned about what he was taking pictures of. It turns out a woman had reported him for “taking pictures of children,” and now Updike has responded to the incident by writing an open letter to that woman.

Updike’s open letter was first sent to and published by the Cambridge Chronicle & Tab. It’s addressed to the “woman in Dana Park who called the police on Sept. 23 around 5:30 p.m.”

Yesterday was a beautiful day, I think you will agree. I decided to take a short walk from my house on Hamilton Street to Dana Park, which I have been coming to almost daily since 1989, the year my son was born. As I often do, I brought my camera, sat on a bench for about 10 minutes, did one lap around the park and headed home.

I had barely gotten across the street when three police cars pulled up: I was told to stop, and swiftly surrounded by six policemen. I was “detained” there for approximately 20 minutes and questioned; another officer returned to the park to find out why you had called them.

My suspected crime, apparently, was having a camera in a public park, and allegedly taking pictures of children. As it turned out, I had taken no pictures that day. But I have been photographing in this neighborhood for 30 years, and have published a children’s book of poems and photographs, always with permission.

The policeman returned and wanted to see my “flip phone,” and then asked me if I knew how he knew I had a flip phone: I didn’t. He knew, he told me, because the woman who called the police had taken a picture of ME, sitting on the bench, and shown him the picture. They then took away my phone, scrolled through the few pictures that were on it.

They continued to hover around me asking questions. As it happened, I was standing near the house where my son now lives, and when my wife appeared, walking down the street after work, and saw me standing in front of his house with six policemen, she instantly feared something terrible had happened to our son. She was shaking, and I explained the situation. She is an English teacher at Cambridge Rindge and Latin School; I am a college professor of English. Our son spent much of the first 15 years of his life in Dana Park.

You must be new in the neighborhood. I am often in the park, on foot or on a bike, talking to friends who have children who play in the playground. I know you were standing very near to me for the entire time I was on the bench, though I could not figure out why. Now I know: you were taking my picture.

Suggestion: the next time you suspect someone is up to no good, perhaps you should say hello, speak to them first and, if still anxious, ask what they are taking pictures of. That’s what people do in a neighborhood park: talk to each other. This would save someone the humiliation and degradation of being stopped and held by the police, and might save the police from wasting their time when they could be doing something more useful, like managing the daily mayhem in Central Square.

The fact that you now have my picture in your phone is both sadly ironic and, well, creepy. Could you please delete it?

In a comment left on the Cambridge Chronicle & Tab’s Facebook page, Updike says that it was a film camera he had with him and that he hadn’t taken any pictures with it at the park.

“…their looking in my cell phone is illegal, as would be taking my film,” Updike writes, “Sitting on a bench in a public park… a crime?”

US Govt to Require Registration of Hobbyist Drones, Report Says

A Story Half Told: Photo Essays Share the Lives of Five Women Living with Breast Cancer