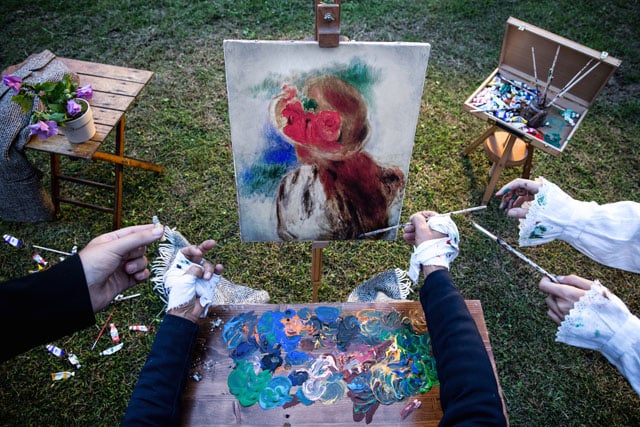 Wouldn’t it be interesting if we had snapshots through the eyes of famous artists throughout history? The images could reveal things they saw, worked on, and were inspired by.

Italian photographer Dan Bannino just finished a new project titled “The Eye of the Artist” in which he recreates scenes of the lives of art masters… as seen through their eyes.


This was a major project for Bannino: he spent 3 months traveling 4,000 miles through 22 cities in France and Spain in his quest to create snapshots of art history from the artists’ perspectives.

“Starting from South of France, I’ve travelled in search of places, food, people and colors that inspired the works of the great masters,” writes Bannino. “I went over the places where these great artists have walked, lived and created, tracing their history through the people who knew them, close relatives, or just local people who were able to pass their adventures by word of mouth.”

Once he had the anecdotes he was looking for, Bannino staged 10 scenes to tell the stories of 10 famous artists. Here are the photos, with each one followed by the anecdote it shows: 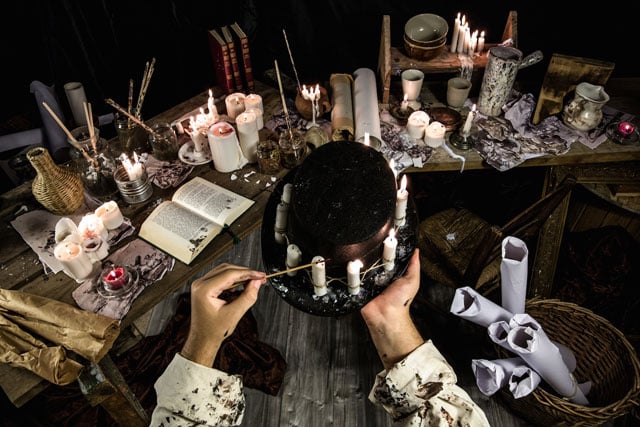 “Francisco Goya is one of the few painters that found fame and success during and after his life. His technique had been object of many studies, leaving more than a secret on his style. He invented a rather unusual and clever method to add some last touches to his masterpieces. Waiting for the daylight to disappear, he pulled out his top hat, which was fitted around the brim with candles; lighting them one by one, he was then ready to embrace the dark and add it to his brushstrokes.” 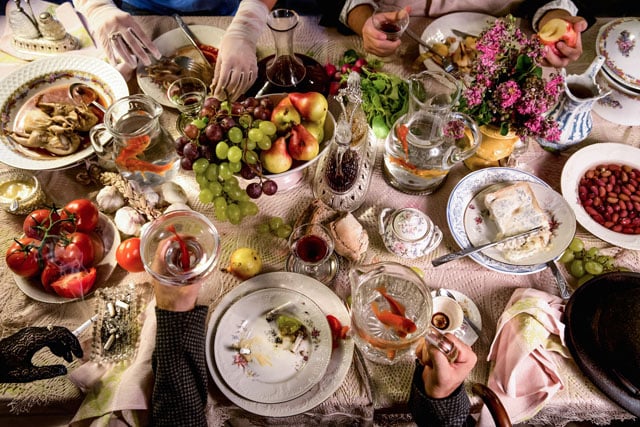 “Henry De Toulouse-Lautrec enjoyed the company of his friends and family, he loved cooking and dining with them all the time. The painter, just before the arrival of his guests, used to fill the water jugs with gold fishes so that everyone had inevitably to drank wine: this way he made sure no one was going to end a meal sober.” 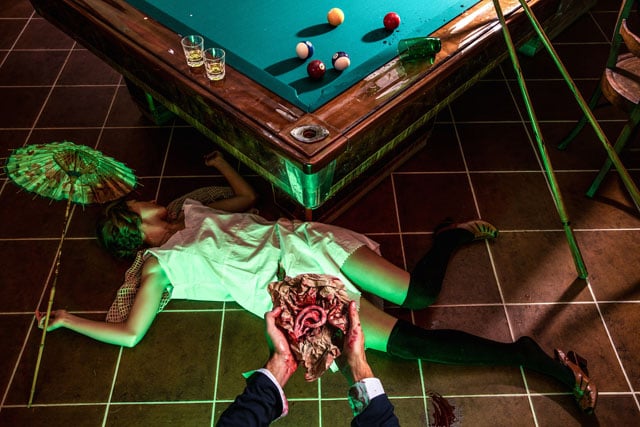 “Vincent Van Gogh is known as the struggled genius who cut off his own ear, but recent studies now claim that the painter lost his ear in a fight with his friend, the artist Paul Gauguin. Van Gogh had his left ear completely slashed off (so not just a tiny piece as most of you may remember) and during the same night as a local newspaper stated, Vincent, bleeding heavily, wrapped his ear in a piece of paper and walked to a nearby brothel. He then gave the unpleasant gift to a prostitute, who immediately fainted.”

“Few people know that Pierre-Auguste Renoir suffered from arthritis for the last 25 years of his life. In a rare footage from 1915 we see the 74-year-old master seated at his easel, applying paint to a canvas while his youngest son Claude, 14, stands by to arrange the palette and place the brush in his father’s permanently clenched hand. He depended on others to move him around in a wheelchair. The pain was so bad he was almost paralysed, but Renoir never stopped painting.” 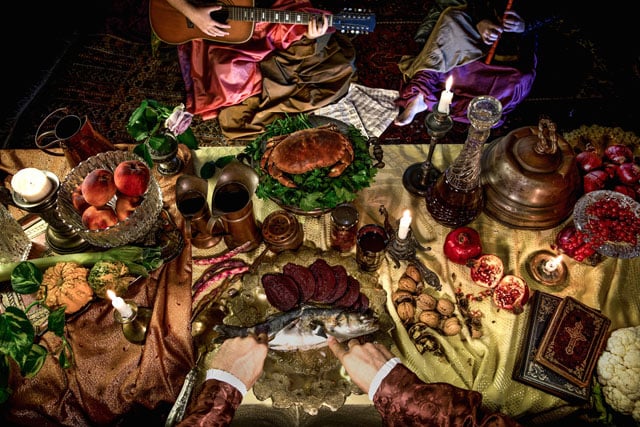 “El Greco (Domenico Theotocopuli) moved from Greece to Toledo (Spain), quickly becoming one of the most successful and rich painters of his time. Confident, extravagant and rebellious, El Greco hired musicians to play while he ate and prided himself on his refusal to comply with his clients’ demands.” 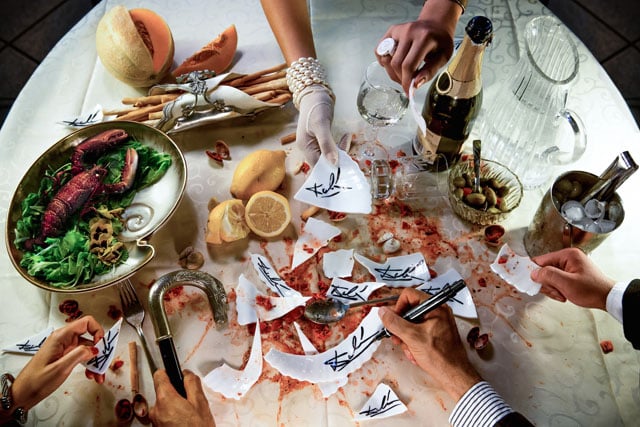 “Salvador Dalì loved Spain and especially his childhood’s places, so it’s not difficult to imagine the flamboyant artist dining at the same place for more than sixty years. One day he arrived at Duran’s resturant and strangely decided to eat alone in a corner of the dining room: he ordered only a fish soup. Once the dish arrived he jumped on his feet and smashing the plate on the table (spilling red soup all over the room) he shouted:” I’m Dalì!”. After a few, silent minutes the artist started to sign all the broken dish’s pieces, for much joy of all the guests, transforming his act in a piece of art.” 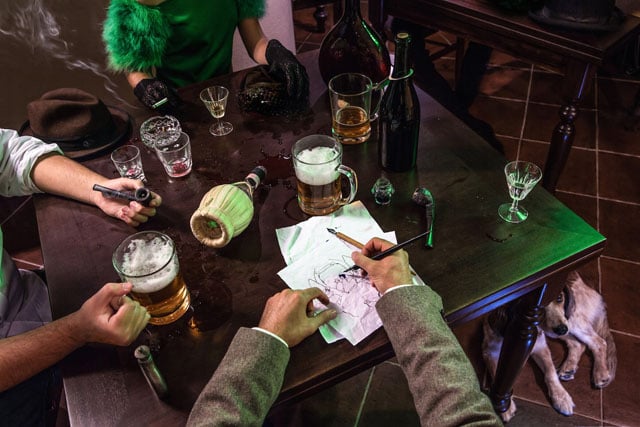 “Barcelona 1899. A young Pablo Picasso began to frequent ‘El 4 Gats’ and later held his first exhibition in the restaurant. During these years, intellectuals from the new bohemian and modernist Barcelona attended performances and concerts and held literary gatherings there. The restaurant, after more than a hundred years, is still opened today, with the same menu cover that the artists himself designed.” 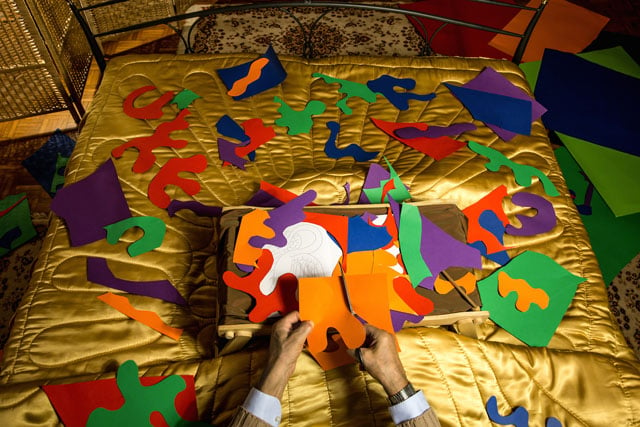 “Henri Matisse initially used paper cut-outs to plot the design of works in other materials. Arranging and re-arranging small forms cut from sheets of paper, he could plan effects of composition, color, and contrast before he painted on canvas. In his later years, coping with the difficulties of old age and illness, Matisse turned to “drawing with scissors,” as a way of painting, inventing a new incredible way of making art: the cut-out. Some of Matisse’s last works were large collages of cut-and-pasted paper, as abstract and bold as anything being made by much younger artists in the early 1950s.” 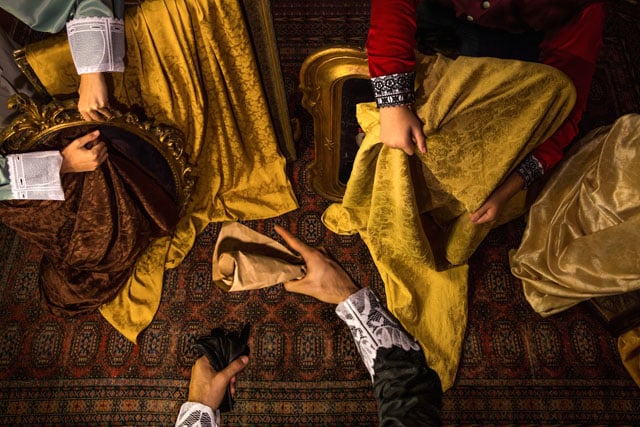 “On August 16, 1623, Philip IV sat for Diego Rodríguez de Silva y Velázquez. Completed in one day, the portrait was likely to have been no more than a head sketch, but both the king and Olivares (the powerful minister of the King) were pleased. Olivares commanded Velazquez to move to Madrid, promising that no other painter would ever paint Philip’s portrait and all other portraits of the king would be withdrawn from circulation.” 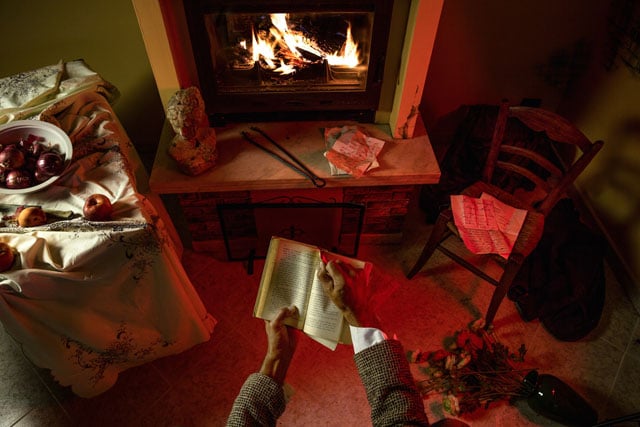 “Paul Cézanne and Émile Zola grew up together – in the same cradle, said Zola. They loved each other, it is tempting to say, like brothers. For Zola, Cézanne was an inspiration and a source. In 1886 a new novel, L’Œuvre, placed Lantier (a character clearly modelled on his friend Cézanne) centre stage and told his life story – a tragedy. He sent the manuscript to Cezanne. The painter’s enigmatic acknowledgement of April 4 1886 was the last letter ever to pass between them. Sixteen years later, news of Zola’s death reached Cézanne in Aix. He shut himself in his room and wept. No one dared to go in. For hours, the gardener could hear him howl. Later he wandered in the countryside, alone in his landscape and his grief.”

You can find more of Bannino’s work over on his website.

Image credits: Photographs by Dan Bannino and used with permission