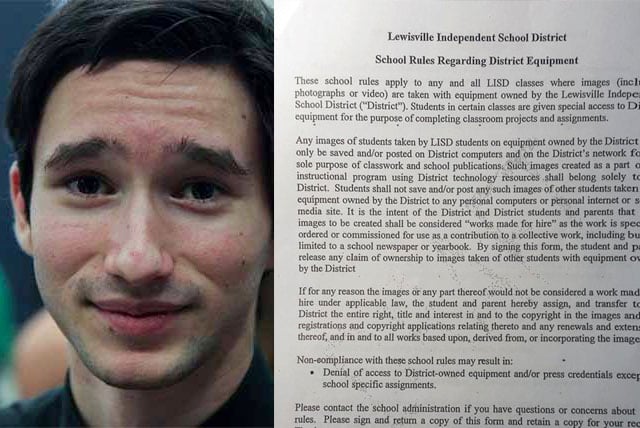 Back in May 2015, the Lewisville Independent School District in Texas issued student Anthony Mazur a notice to take down any photographs from his personal Flickr account that had been captured with school equipment or face a threat of suspension. After much debate with the school board, Mazur won the battle thanks to US copyright law and support from his local community.

The school isn’t backing down from its policy, though: it’s now requiring students to sign a “work for hire” contract to use district-owned camera equipment and, as a result, surrender all of their copyright protection. Mazur recently posted the new contract on Twitter for everyone to read. The contract goes on to classify student’s images as “works made for hire”. Under this title, the entire right, title, interest, and copyright of the images transfer to the district in addition to any work “based upon, derived from, or incorporating the images.”

Since the majority of high school students are under 18, a parent or guardian signature is required for validity. Students who do not comply with the rules will be “denied access to district-owned equipment and/or press credentials except for school specific assignments.”