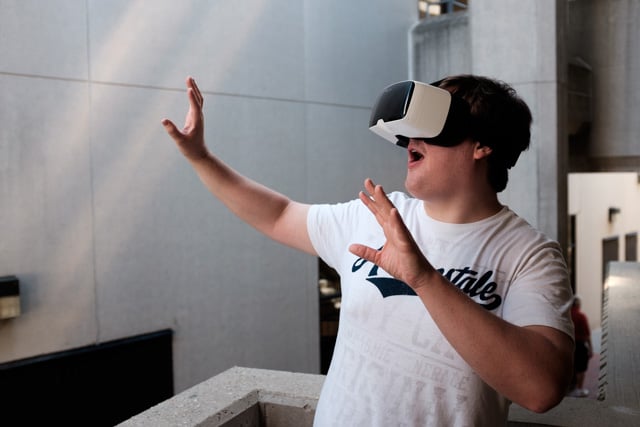 The promise of truly immersive, virtual reality headsets for the masses is just around the corner with Oculus Rift launching its consumer version in 2016. In the meantime, a number of alternative solutions have been introduced including Google’s Cardboard, Samsung’s GearVR, and Carl Zeiss’ VR ONE headset. We’ll be taking a look at the latter to see if one of the world’s greatest optics manufacturers has what it takes to jump into the virtual reality space. 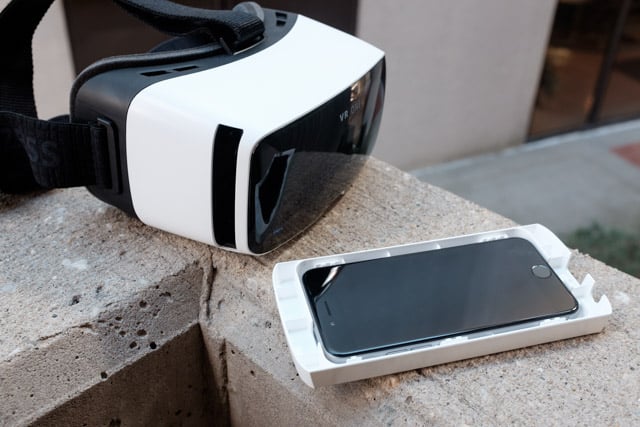 I typically do not write reviews while dizzy or while experiencing skull piercing headaches; however, that is what I must do today. I have spent the last few minutes with the Carl Zeiss VR ONE headset in one last attempt to try and enjoy the virtual world. This is not my first encounter with the VR ONE, but I do hope it is my last. 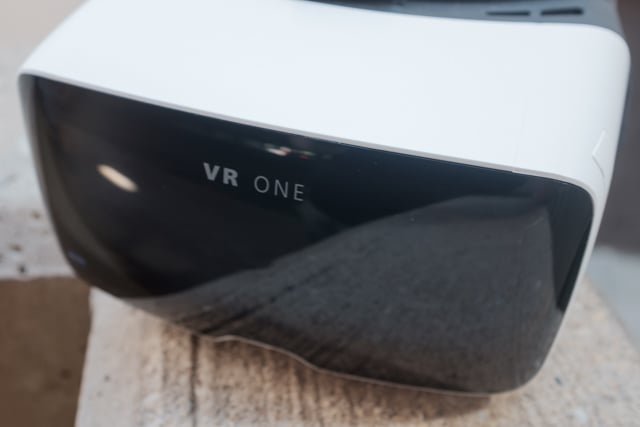 Putting Carl Zeiss aside, I have also played with Samsung’s GearVR headset in the past. As soon as I heard the company was offering an affordable version of virtual reality, I ran down to my local electronics store to test the display unit. It was exactly what I expected: a low-resolution version of Oculus Rift. Low resolution does not mean boring – I wanted a GearVR as soon as I tried it. However, my iPhone was not compatible and I didn’t fancy shelling out $200 for a temporary solution. 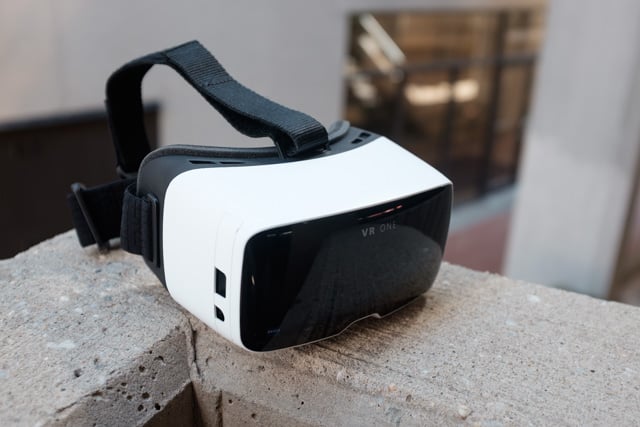 When the folks at Carl Zeiss announced that they would be producing a consumer product for Apple and Android users alike, I was ecstatic. Even better, the VR ONE would only cost $129 and promised to be compatible with a number of readily available applications in the App Store. Naturally, I jumped on the opportunity to take the headset for a test drive. I was ready to experience 360-degree videos, immersive panoramas, and of course, exciting games. 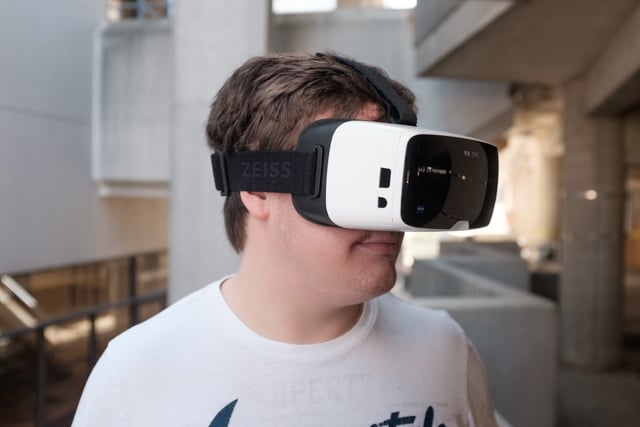 The Zeiss VR ONE showed up in subtle packaging that was quickly thrown aside to access what was inside: a Zeiss VR ONE headset and tray modeled for the current iPhone 6. In addition to the headset itself, you will have to purchase a ‘tray’ that holds your device. Available trays and supported devices include the iPhone 6, Samsung Galaxy S4, S5, S6, Nexus 5, and LG G3. The design of the VR ONE is exactly what you would expect from Carl Zeiss: high quality and sturdy. Some have looked down upon the headset for using plastic, but it helps to keep the weight down and doesn’t feel like it would crack or chip easily. The design is minimal and futuristic featuring a monochrome color design minus the small Carl Zeiss logo.

I took out my iPhone and launched the App Store to grab the applications that Zeiss promised. Only three were present: an augmented reality experience, a virtual cinema, and a media launcher. I immediately downloaded all three and assumed that the majority of goodies would be within the media launcher. All applications were free to download. Once everything was installed, I fired up the VR ONE Media Launcher, slid the smartphone tray into the headset, and strapped myself into the unit. That is the exact moment all my high hopes began to die. Everything I viewed through the headset was extremely blurry and I could instantly feel my brain rejecting the experience. Luckily, headsets like these usually include an adjustment option for iris differences; this exact model, however, did not. Zeiss decided to ditch the adjustable lenses and aim for a ‘one size fits all’ experience. Sadly, one size does not fit all. In fact, my experience was not isolated. I had four other individuals try out the Zeiss VR ONE headset with half of them confirming that they felt dizzy or sick after the experience. Despite this fact, I continued my attempt in reviewing the included applications. 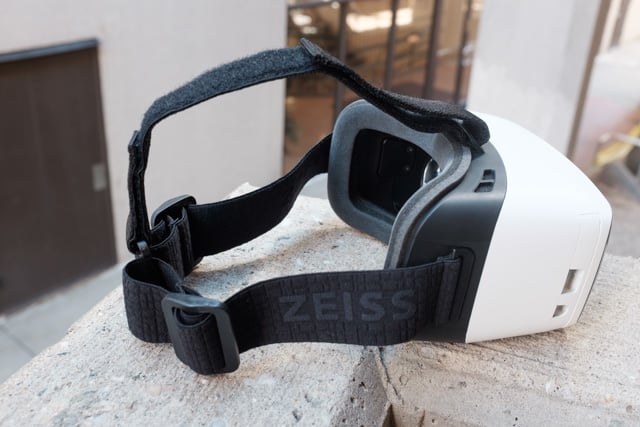 The headset was extremely comfortable despite the strain the lenses were having on my eyes. Wonderful padding, along with three straps, kept the device firmly planted in place without digging into my skull. Many headsets tend to place weight upon the bridge of the nose, but the VR ONE did not have this issue. 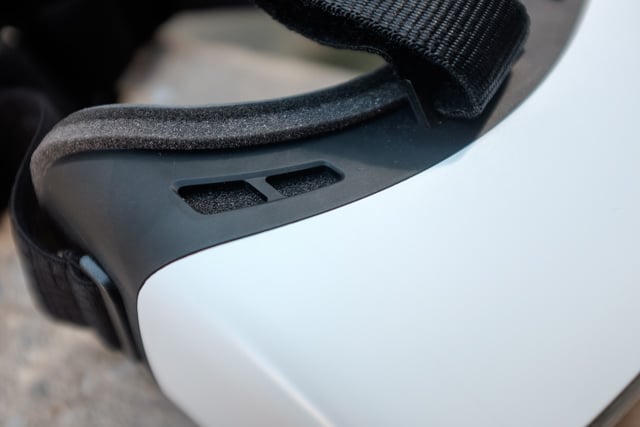 The augmented reality application provided by Zeiss was interesting for a few minutes as a tech demo but quickly lost its appeal. The Cinema app was also very fascinating, but due to the blurry quality one would have to wonder why they wouldn’t just watch directly on their smartphone. As for the Media Launcher, it merely linked to a few recommended applications from the App Store. It is also worth mentioning that Carl Zeiss did not choose to integrate Google Cardboard’s magnetic button, so a number of the available virtual reality applications on the App Store are incompatible with the unit. We love minimalism, but not when it cuts out major functionality. Needless to say, my reviewing was cut short when I had to remove the headset and pop some Tylenol to feel a bit better. My disappointment for this headset doesn’t seem to be expressible in words. I had used virtual reality headsets with smartphones before and had wonderfully enjoyable experiences, but the VR ONE simply was not one of those headsets.

Held back by unadjustable lenses and a lack of controls, the Carl Zeiss VR ONE is a product best avoided for now.

Shooting Junk with Junk, or: How I Repaired a Vintage Lens Myself

The Perils of Crowdfunding Your Photo Project