A diver’s helmet camera recently captured the moment he stumbled upon treasure from a 1715 shipwreck off the coast of Florida. The 1-minute video above was recorded by Brent Brisben, who found 51 gold coins, 40 feet of gold chain, and an extremely rare coin made for Phillip V, King of Spain. Together, the found treasure is worth over $1 million.

Brisben is the owner of a company called Queens Jewels LLC, which has salvaging rights to the 1715 Fleet, a group of 11 Spanish ships that sank off the coast of Florida on July 31st, 1715.

His find was one of the biggest hauls of treasure so far from the shipwreck site, and luckily for him, he managed to capture the historic discovery on camera. 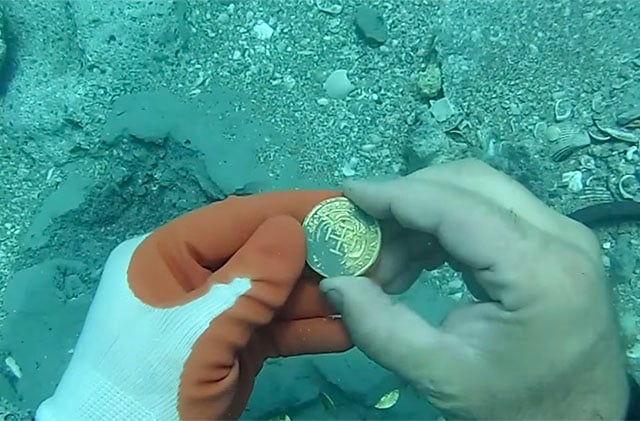 “I was literally shaking,” Brisben tells New York Daily News. “It was overwhelming.”

Of the 11 ships that sank, 6 have been identified so far. 5 more are still somewhere at the bottom of the ocean, with an estimated $400 million in treasure on or near them.

LumoPro LP605M: A Light Stand That Can Morph Into a Monopod