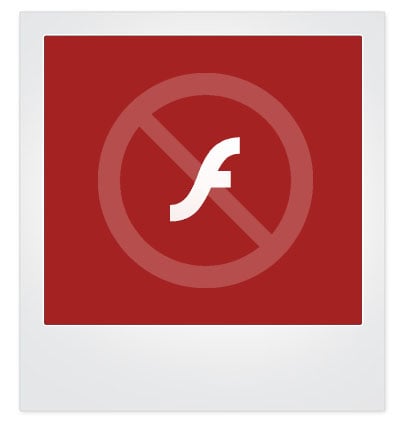 Heads up: if you have a photography website powered by Adobe Flash, you should make plans now to switch to something other than Flash. Flash-based photo sites have long been the source of frustration due to usability issues (and auto-playing music), but now major Internet forces are rallying to kill off the technology.

Mozilla Firefox and Google Chrome both blocked Flash yesterday in response to news that hackers were exploiting known security bugs to target computers.

The Wall Street Journal reports that the decision was made by Mozilla and Google after documents leaked onto the Web with information regarding a flaw in the latest version of Flash.

Mozilla’s head of Firefox support, Mark Schmidt, announced the block in a Tweet:

BIG NEWS!! All versions of Flash are blocked by default in Firefox as of now. https://t.co/4SjVoqKPrR #tech #infosec pic.twitter.com/VRws3L0CBW

Both browsers will allow Flash again after Adobe releases an official fix to the problem, but the temporary block immediately sparked new calls for the Internet to move away from Flash technology, which is accused of being buggy, insecure, and inefficient.

It is time for Adobe to announce the end-of-life date for Flash and to ask the browsers to set killbits on the same day.

Even though this latest ban is temporary, Flash’s days appear to be numbered. Your Flash website may get its pageviews back once the flaw is fixed and Flash is unblocked, but it’d be a good idea to switch over to better technologies before things really do wind down.

(via Wall Street Journal and PopPhoto)

Update: It turns out Adobe actually pushed out an update with the fix yesterday. You can find that download here. In response, Firefox reenabled Flash by default in its browser today.