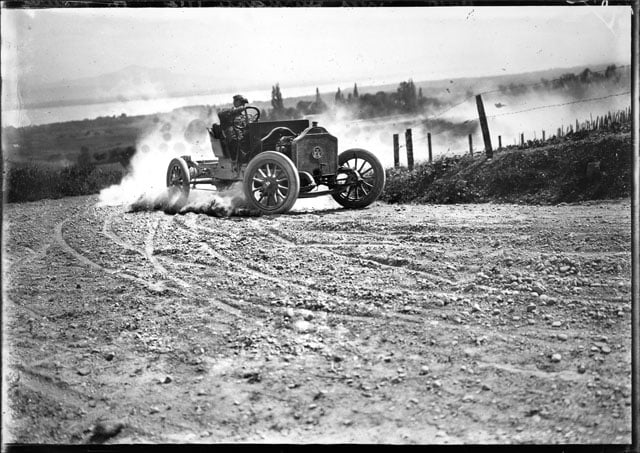 1,250 glass negatives from between 1910 and 1925 were recently found in the archives of the Swiss photo agency Keystone. After some thorough research work, it was concluded that the photos formed an important chapter of Swiss photographic history: they were shot by photographer Jules Decrauzat, widely considered now to be the first sports photographer and first major photojournalist in the history of Switzerland.


Decrauzat was born in the city of Biel in 1879, started out his career as a sculptor in Paris, and there discovered the medium of photography. In a world in which most photos were static and posed, Decrauzat realized the camera’s potential in capturing news as it happened.

Decrauzat passed away on June 29th, 1960, and his photographs faded from public consciousness. Some estimate that Decrauzat created roughly 80,000 over his lifetime, but the vast majority of his images have been lost or destroyed. About 1.5% of his images found landed in the hands of the photo agency Keystone, which managed to preserve them over the decades until their recent rediscovery.

The Swiss Foundation of Photography is now collaborating with Keystone on a photo book and an exhibition celebrating Decrauzat’s work. There are a couple of new online galleries in which you can browse through images found in the book and in the show, which will run at the foundation through October 11th, 2015.

Image credits: All photographs by KEYSTONE/Photopress-Archive/Jules Decrauzat and used with permission