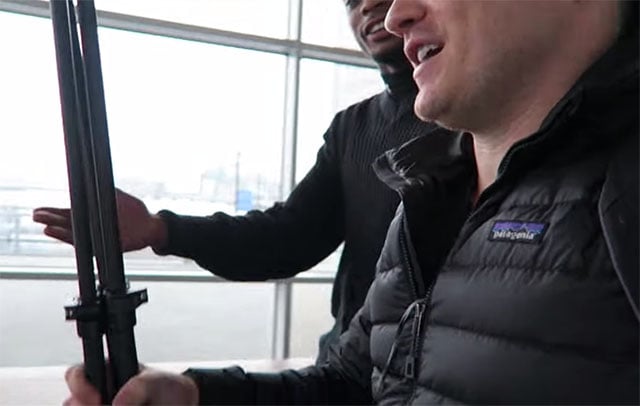 This past weekend, journalist Josiah Daniel Ryan visited a public pier in New York City to shoot a video of some boats there. He was then confronted by a number of security guards, one of whom told him that tripods “are not allowed on New York City property.”


The security guard later pulled out the official rule book to show Ryan the rule, but found that it said that people can take photos or videos with a handheld device “with or without a tripod” as long as they’re not getting in the way of things. Ryan says it was “rather amusing” but “baffling” as well.

Ryan has written up an account of what happened over at TheBlaze, where he serves as the breaking news editor. He also posted a video he shot during the incidents:

“I decided to publish this video and account because I think it raises important questions on free speech,” Ryan says. “What happened…left me shaken and pondering what kind of First Amendment rights journalists, photographers, and members of the public actually have on their public property in New York City.”

P.S. While Ryan does have his share of supporters, there seem to be many critics as well. Here’s what the most popular comment on the YouTube video says:

You should try being less of a worked up a**hole and you might get treated better. You are disrespectful and it appears like you look for trouble and push people’s buttons on purpose. It’s people like you that give the people trying to expose over-reaches of power a bad name. Whatever positive things you accomplish will be overlooked due to your douchebaggery.