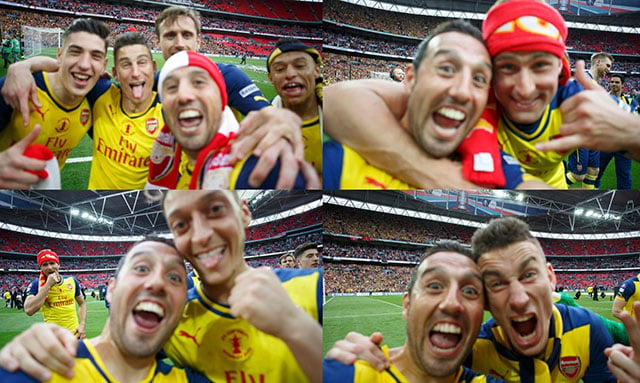 After winning the FA Cup Final yesterday, star soccer player Santi Cazorla ran behind the goal, grabbed one of the remote DSLRs placed there, and used it to shoot a series of selfies with his teammates to celebrate their victory.

Still singing. The sore throat tomorrow will be worth it. Number 12. @Arsenal #StrongerTogether pic.twitter.com/FqKv69V9ea

The camera belonged to sports photographer Tom Jenkins of The Observer, who notes that the camera settings weren’t meant for selfie taking at the time.

“It’s left there with the focus set to around seven or eight feet to capture goals and penalty area incidents remotely, while I’m higher up the pitch,” Jenkins writes at The Guardian. “I saw him starting to taking selfies – but judging by the results I found on the memory card, he never got to grips with adjusting the focus.”

Somewhere along the way, teammate Aaron Ramsey took over the camera, and somehow he managed to shoot an in-focus shot. “He either used the ring, found the right button or fluked it,” Jenkins says.

After their impromptu photo shoot, the players left the £3,000 (~$4,600) in gear (including a Canon DSLR, mini tripod, and transmitter) lying in the middle of the soccer field.

You can read Jenkins’ account of what happened over at The Guardian. A montage of the selfies was also published the next day in the pages of The Observer:

Nice montage in the Observer of selfies when Ramsay and Cazorla picked up @TomJenkinspix camera from behind the goal pic.twitter.com/pDwSKxvOhD

Image credits: Photographs by Tom Jenkins/Observer and used with permission