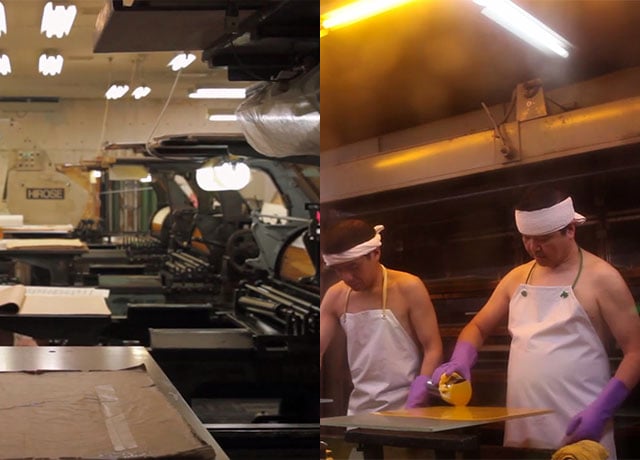 Collotype is a photo printing process that was invented by French photographer Alphonse Louis Poitevin back in 1856. Due to its ability to preserve fine detail in prints, the process was used to create fine art photo prints for many years before other processes arrived on the scene.

Photographer Fritz Schumann writes that the collotype printing industry has collapsed in recent years, and that there are now only two commercial collotype printing companies remaining in the world. Both of them are found in Kyoto, Japan.

The larger of the two, and the only one that can print in color, is a studio called Benrido. Schumann recently paid the studio a visit and created a beautiful 10-minute short film about its operations titled “A Story of Ink & Steel”:

Benrido released a short-film itself about a year ago to share what collotypes are and what the studio does:

Here’s another 10-minute video showing how Benrido creates a collotype print of a photograph, from start to finish:

“The quality of collotype prints can hardly be matched by today’s printers, the colors are extremely endurant and stay vibrant for decades,” Schumann writes. “It’s a printing without relying on dots, hence it’s almost 1:1 in resolution when compared to the original.”

Benrido is currently running its second annual Hariban Award photo contest, which encourages photographers to submit their best black-and-white photos for a chance at having them printed by the master collotype printers at Benrido.

Last year there were 131 entries from around the world. Photographers who wish to enter this year’s contest can participate by paying a $40 entry fee and submitting 12 digital monochromatic photographs. The submission period will end on June 30th, 2015.

The winner, selected by a jury of four, will receive an all-expenses-paid trip to Kyoto, Japan, to participate in the production of a collotype portfolio using their photos, which will also be exhibited at a show in 2016.

You can find more info about Benrido’s services over on the studio’s website.